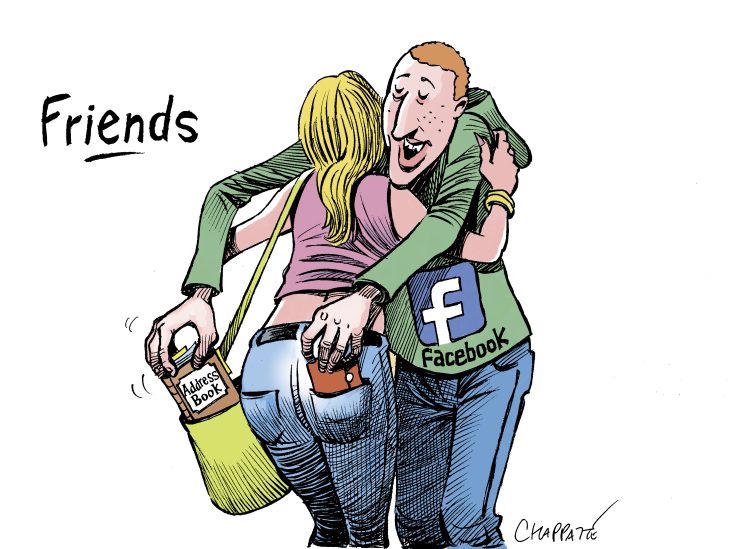 I know you’ve been under fire lately due to the Cambridge Analytica scandal (and the fact that your gobzillionaire CEO Mark Zukerberg is reacting like a 16-year-old who just got caught allowing his friends to raid his mom’s make-up and wardrobe to prepare for a Comic Con convention).

I have to admit that since I don’t really understand your complicated privacy settings anyway, I just assumed that anyone with the computer skills of algae could probably swipe, scrape, gouge, or snort my personal data – and then die of blunt-force boredom shortly after examining it. Besides, I consider myself immune to a consulting firm improperly using my profile information to sway my political opinions, like my belief that the current United States Congress is actually another reboot of The Muppet Show.

Please don’t get me wrong, though. Social media privacy is a serious issue, and I know that the data of millions of Facebook users is at stake. In my “List of Things I Worry About at this Point in my Life,” though, this issue ranks just below whether the skin on my neck has gotten loose enough to make me attractive to an amorous Galapagos tortoise.

Therefore, I just want to say that I forgive you, Facebook, and unlike the announcement that my social media “friends” occasionally make, I WON’T be taking a break from you anytime soon. I like you. Call it a guilty pleasure. Ok, it’s an addiction, but at least I don’t allow it to interfere with my family life or career – except when I’m at home or at work.

So what is it that makes you like the unlimited chips and salsa at a Tex-Mex cafe?

First, I actually enjoy being provoked by posts about political issues,- like Donald Trump’s blatant use of Russian deodorant – even though I realize that these posts were probably planted by Vladimir Putin’s personal chest waxer.

I also like snooping on former classmates from high school, most of whom didn’t hang out with me, and still wouldn’t, and I don’t blame them. High school wasn’t the best time of my life. Some of it was fun, but most of it was awkward and embarrassing. Think electric blue parachute pants and a permed mullet,- and that was my understated look.

Among social media platforms, you’re actually kind of old and uncool these days, making you perfect for dads like me who enjoy posting family photos ad nauseam to the embarrassment of my children and spouse.(Yes, my wife is clearly out of my league, I can’t take credit for my children’s talents and good looks, and I realize that nobody else thinks they’re as good-looking and talented as I do.Just click “like,” and move on, people!)

I also relish the feeling of superiority I get when my Facebook friends misspell words and use poor grammar in their posts, until I discover that I wished everyone a “Happy Keaster” in my own post from three years ago when that Facebook memories thingy pops up.

Speaking of superiority, I especially get a kick out of those Facebook videos of babies eating lemons and frightened adults being chased by waterfowl. These usually make me feel smarter.

So thank you, Facebook. Thanks for reminding me of birthdays I would never have remembered or known about otherwise, some of which are birthdays of people I barely know and who undoubtedly find it creepy that I’m wishing them a happy birthday. Thanks for the opportunity to scoff at those posts promising that I’ll go to heaven, win a million bucks, be better looking and save defenseless puppies if I like and share a post on my wall.Trust me; they don’t work – especially the better looking one.

Most of all, thanks for giving me an opportunity to procrastinate from doing whatever it is I should be doing other than looking at Facebook.

See you tomorrow, Facebook – or in a few minutes.