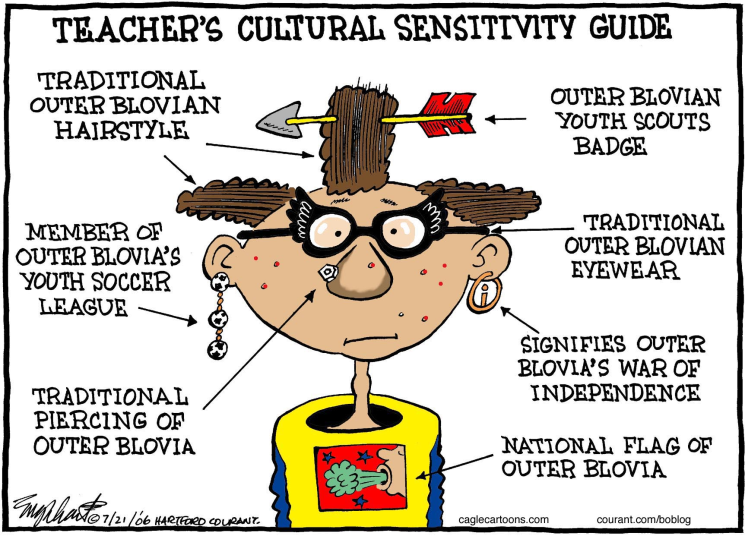 I feared this day might come, but I wasn’t really prepared for it when it did. No, I don’t mean the first time I had to remind my 14-year-old middle daughter to shave her armpits. It was when she asked if she could get a piercing on something other than her earlobe.

Now, before you get the wrong idea, I need to clarify that the appendage my daughter wished to have impaled was still in the general ear vicinity. But instead of the traditional lobe area, she wanted a pinhole puncture wound in her upper ear gristle, which I had always assumed, based on extensive experience, was only good for painful flicking by junior high boys.

You have to understand that among my three girls, the middle one is the most like me – and not just in the irresistible charm, devastating good looks, and sincere humility departments. She also tends to be impulsive and daring, like the time she videoed herself kissing a live mullet – the fish variety – at the beach for no apparent reason (not that there ever would be just cause for snogging wild sea life). This is also the child whom we have repeatedly taken to the doctor for the removal of various foreign objects, usually from her eyeballs. Apparently, introducing external fixtures to her person is a natural tendency with her.

These days, you only have to hang out at Starbucks for a few seconds (which is too long for me) to realize that more young people than ever before are walking around looking like they recently face-planted into an open tackle box. And I can’t criticize them too much. When I was about 15 years old, I asked my dad if I could get one of my ears pierced. I figured with an earring, I’d look just like Rick Springfield – if Rick Springfield were a slightly chubby dork with oversized frames and tinted corrective lenses. As expected, my dad lovingly agreed to do it himself with some industrial hardware – right after I made other living arrangements. (I wisely opted for a gold-tone ear cuff, which only turned my ear green if I left it on for more than 10 minutes, or so. )

Naturally, my immediate answer to my daughter’s request was a resounding and definitive “No!” mostly because “No!” has fewer letters than “I can’t think of a logical reason that this isn’t a good idea right now without getting a headache. ”

I’m proud to say that I maintained my position for an entire 48 hours before I caved. Then came the fun part. After doing some research, I discovered that ear cartilage should be pierced with a sanitized needle, not the staple gun they use on little girls in the mall jewelry store. This would mean a trip to the local tattoo parlor, an establishment I thought I might never have to visit, unless I decided to become a pirate.

To my surprise, though, the place was very clean, and although the technician was clearly not of this galaxy (and demanded a high five at the end of every sentence he uttered – always ending with the word “dude”), he was professional and thorough in his work. There was very little blood involved and only one fainting spell. Luckily, I was sitting down, and they had recently mopped the floor.

The staff at the parlor even suggested that I get some body art done for myself. I politely declined, of course, considering that at this point in my life, the old canvas is starting to resemble a loose sofa slipcover. Any piercings or tattoos I get would likely wind up on the soles of my feet before too long.

After all was said, done and skewered, I was pleasantly surprised by the whole ordeal. I think it’s important to allow teenagers to have a little self-expression – as long as they don’t wind up looking like extras from the Mos Eisley Cantina scene in “Star Wars. “My daughter is happy with her piercing and has promised she is done accessorizing her melon. Now, if I could only get her to commit on the issue of mullet kissing.

Graves is an award-winning humor columnist from East Texas. His columns have been featured in Texas Escapes magazine, The Shreveport Times, The Longview News Journal, and The Kilgore News Herald. Contact Graves at [email protected] net.