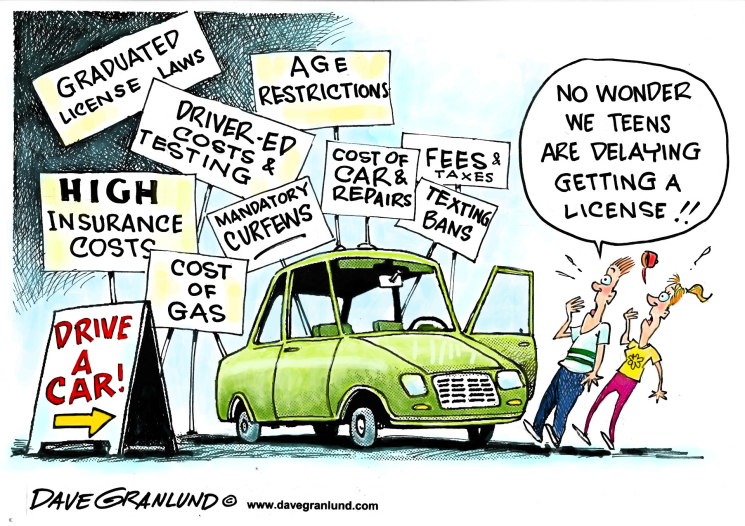 Baby, You Can Drive My Car... Or My Tank

Many teens take a significant step toward adulthood when they get behind the wheel (and stereo volume controls) of their own vehicles.

My eldest and most expensive daughter recently reached this milestone when my wife and I purchased her a pre-owned 2018 Nissan Altima for her sixteenth birthday. She specifically requested "glacier white" - because plain white would suggest we were simply providing her with a practical mode of transport, rather than a lit ride to impress her squad when she pulls up to spill tea about a dank snack she thinks is the GOAT. Yeet!

I can't really complain, though. I remember vividly when my dad took me to a nearby dealership to pick up a gently used, black 1985 Cutlass Calais with the word "SLEEK" painted in neon orange across the front window. It was the most glorious two-door Oldsmobile love machine I had ever seen. My Purple Rain cassette never sounded sweeter than when it was pulsating within those deeply tinted windows. I drove that work of poetry on wheels until literally it bled to death, hemorrhaging antifreeze fluid all over the front passenger-side floorboard. But I digress (and need to wipe my eyes).

When my daughter told us she'd been praying for an Altima, my wife and I were a little disappointed. Don't get me wrong, though. We were thrilled that she was including God in her pursuit for a car that's "straight Gucci," and we have nothing against the automaker that brought us the delightfully hilarious Cube. We were just hoping that, based on her tendency to disregard the existence of curbs, the Lord would lead her to something a little more sturdy - like a military surplus tactical vehicle. Eventually, though, we reconciled ourselves to the idea of a mid-sized sedan and intensified our own prayer regimen - interceding on behalf of her tires and hubcaps.

But first we had to go through the stimulating process of acquiring Altimus Prime, as my daughter calls "him." (Cue the rare dad eye-roll.) The car dealership experience proceeded as usual - with my wife doing all the talking while I tried to look interested and strongly considered waiting in the children's play area. After going through the typical charade of making a counter-offer, followed by the sales consultant stepping out to ask the sales manager (code for "visit the vending machine to slowly eat a bag of Funyuns"), we then proceeded to the financing department.

The finance manager encouraged us to consider several optional warranty plans - each of them named for precious metals we can't afford. He implied that if we wanted protection that extends beyond the plastic tire valve-stem caps, we should go with the Ultimate Platinum Protection plan, which would only add enough to our monthly payment to buy me a full body lift.

At that point, I needed a break, so I excused myself to go the restroom. However, to my alarm, and my wife's amusement, I found that the door to the finance manager's office was locked. Apparently, they don't let you out until you've signed something that guarantees the company will survive the next round of Trump tariffs.

Once I was finally finished watching my wife do her adulting, while she occasionally patted me and assured me that everything would be ok, the sales associate walked us out to the car, placed an enormous red bow on the hood, gave me a Kleenex, and took a photo of my beaming daughter standing beside Altimus Prime. It was a truly stirring moment - especially for the sales associate.

It only took our daughter about a month to give Altimus Prime a minor facial injury while attempting a complex and dangerous vehicular maneuver - namely parking. But I took the accident in stride and assured her that I've had my share of fender-benders, usually caused by matters beyond my control - like a Cardi --song coming on the radio.

Anyway, I'm now bracing myself for a repeat of the whole vehicle-buying ordeal with my middle daughter, who turns sixteen in a few months.

Anyone know where I can get a Russian tank?

Graves is an award-winning humor columnist from East Texas. His columns have been featured in Texas Escapes magazine, The Shreveport Times, The Longview News Journal, and The Kilgore News Herald. Contact Graves at [email protected] net.