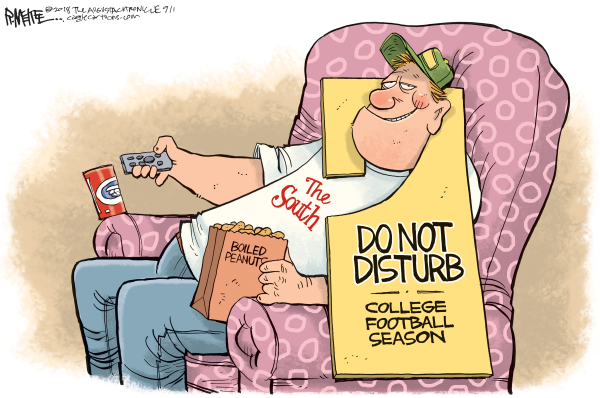 Before a couple of weeks ago, it had been over twenty years since my wife and I attended a Texas A&M football game.

That's partly because we’ve spent the past two decades or so raising three daughters, who’ve been more interested in spending our cash on hamsters, horses, dance recitals and any product manufactured by the Apple corporation than football tickets. To make our game attendance even more unlikely, watching my beloved alma mater play football makes me so nervous that my innards feel like I just ate a large family of live hedgehogs.

Now that our eldest and most expensive daughter is herself a Texas A&M Aggie, I’ve run out of excuses not to go watch the Aggies give me apocalyptic indigestion live. In fact, we broke our streak on a recent trip to College Station to bring our daughter a new debit card after hers finally vaporized.

After dining on some scrumptious cooking grease disguised as burgers and fries, we headed to my daughter’s townhome to park and then walk a mile to Kyle Field for the game. Although we wanted to park closer, parking spots at Texas A&M on game days are about as rare as a sighting of University of Texas superfan Matthew McConaughey playing a set of Aggie-themed bongos in the nude.

Luckily, it was early September in the Brazos Valley, which meant that our stroll was nice and crisp, in the sense that over-fried bacon is crisp, then steamed in an Instant Pot – that catches fire. My youngest daughter, who has an aversion to most physical movement, was convinced that she would die of acute climate change at any moment, and she would only roll her eyes when I repeatedly asked her if she wanted to borrow some of my deodorant.

We were almost saved from the sidewalk lava by one of the convenient university shuttle busses, but by the time we ran up to board, it was stuffed to capacity with college students selfishly enjoying the air-conditioning and probably praying that the Griswold family wouldn’t try to squeeze in.

When we finally reached Kyle Field, our daughters rehydrated with some concession-stand burritos and giant pretzels, and we found our seats –along with about 100,000 other sweaty Aggies. It was like being in a massive open-air locker room after running laps in junior high P.E. – minus the jock straps and AXE body spray.

Once the game began, I felt like I was back in college – enthusiastically doing the Aggie yells, singing “The Aggie War Hymn,” and looking forward to that first Aggie score – when I could score a kiss from my best girl (if my youngest daughter and her enormous pretzel hadn’t been in the way). In the part of the War Hymn where Aggies lock arms and sway back and forth to “Saw Varsity’s horn’s off,” I suddenly found myself in the burly, one-armed embrace of my neighboring fellow Aggie, who was roughly the size of André the Giant. (Needless to say, I didn’t ask him if he’d like to borrow my deodorant.)

True to form, the Aggies had me chewing my fingernails down to my elbows until they pulled away in the second half for an old­­-fashioned blowout, the only kind of Aggie game my guts can enjoy.

We finished our weekend in Aggieland the next day with a guided tour by our eldest daughter of the buildings where she attends her classes, a visit to the campus bookstore to break what was left of the bank on Aggie sweatshirts and stuffed animals, and a stop for some delicious drinks at the local Dutch Bros Coffee, which is kind of like Starbucks–only more Dutch.

It was a truly great weekend visiting with our daughter, enjoying the game, and reminiscing about our college days. And I’m actually kind of looking forward to attending another football game – if I can convince my stomach to come along with me.