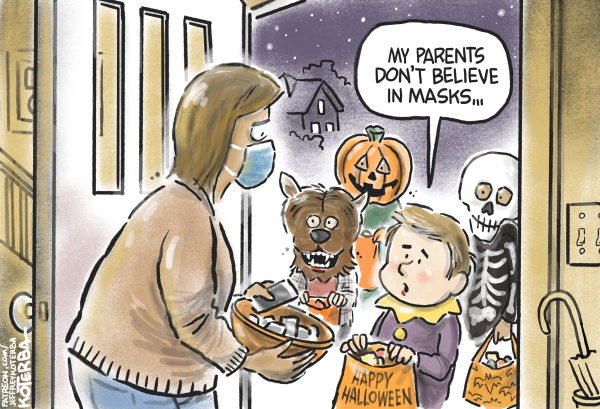 Now that we are elbow-deep in the pumpkin guts of October, I’m starting to feel the holiday season kick-off excitement. It has captured my imagination ever since I was a young lad overdosing on Brach’s Mellowcreme Pumpkins and memorizing the Sears Holiday Wish Book when I should’ve been diagramming sentences or deciphering the dark sorcery of fractions.

But like Sears, which is currently in retail ICU, Halloween just ain’t what it used to be – especially since my three daughters are now teenagers and barely acknowledge me as a semi-solid state of matter.

When the girls were little, one of the highlights of my year was helping them get dressed up to go trick-or-treating, always watching out for their wellbeing as I conducted random taste tests of their treats – just the chocolate ones – for safety.

For the past few years, though, instead of some innocent trick-or-treating, my two older daughters have focused on the frightening and macabre side of the holiday – namely teenage boys. And due to the COVID-19 pandemic spoiling last year’s Halloween night, my youngest daughter had to settle for staying home and seeing how many Kit Kats she could consume without throwing up on her iPhone.

Even our family tradition of gathering in the garage a few days before Halloween night to carve jack-o’-lanterns has been disrupted by the ravages of puberty (theirs-not mine). For 17 years straight, we would scrape, gouge and slice until the floor of our garage looked like the Great Pumpkin just gave birth. And once the carving was finished, I’d chase the girls around the front yard in an old sheet listening to them squeal with delight and trying not to trip and rupture a major organ (mine, not theirs).

Last year, nobody was interested in carving a single pumpkin, and my wife wouldn’t let me wear a sheet and run around the front yard by myself – or chase her.

And speaking of ghosts, it’s a lot tougher to give the girls a harmless scare these days (except when I walk through the house shirtless). I used to enjoy giving them the willies with my story of the giant “ghost skunk” that lurked around outside, waiting to spray young girl children who complained about their dad’s jokes and fashion choices. Since the girls all became teenagers, though, I’m the one constantly terrified that one of them is going to come home holding hands with some dude named Blade, Diesel or Maximus.

Yes, I understand that change is inevitable, and it’s usually best to embrace it–or at least give it a side hug. And I do love my teen daughters dearly, even if they would rather spend time with boys who still don’t have to shave their ears.

I’m not giving up on Halloween quite yet, though. In fact, since Dr. Fauci recently released the holiday out of quarantine from his basement, I was thrilled when my youngest daughter asked me to take her trick-or-treating this year (maybe for the last time) – if I promise to stay out of her Kit Kats.