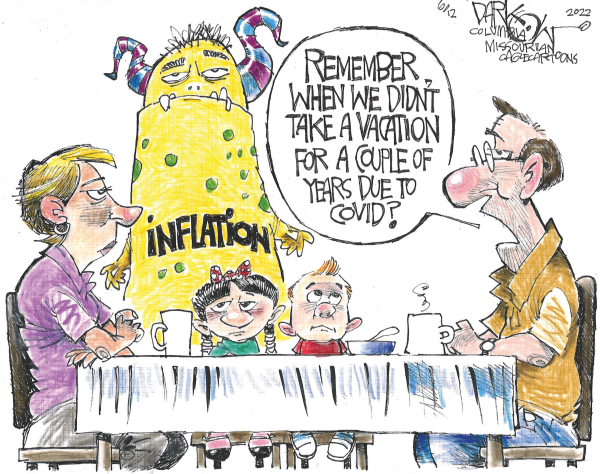 It’s time for another installment of “Places you should visit before your loved ones start picking out your burial underwear!”

Recently, my wife and I took a trip to Birmingham, Alabama, to attend the National Society of Newspaper Columnists’ annual convention so that I could collect another “leg lamp” for humor writing. “It’s a major award!”

The drive from East Texas to Birmingham was a bladder-bloating 7 ½ hours, so we treated ourselves to several stops at convenience store restrooms along the way. I’ve found that interstate restrooms offer a true sense of an area’s distinctive character – and you can usually wash it off if you use enough hot water and antibacterial soap.

When we finally pulled into the picturesque city nestled amid the foothills of the Appalachian Mountains, we were starving – as usual. And because we wanted to try some regional cuisine that truly represents the unique culture of the Deep South, we naturally chose a Tex-Mex chain restaurant.

In fact, I read that that Birmingham is sometimes called “The Magic City” because of how quickly the former industrial powerhouse grew after its founding, but I’m now convinced that the name represents the fact that it hosts two of my favorite Mexican restaurant franchises (Chuy’s and Superior Grill) within 3 ½ miles of each other. Abracadabra, indeed!

When we returned to our Double Tree hotel after supper, the clerk presented each of us with a famous (and warm) Double Tree cookie. Unable to resist such unhealthy deliciousness, I inhaled mine in the elevator, and because I’m always looking out for my lovely wife’s best interests, I waited until she was in the shower to eat hers.

The next day, we took a whirlwind guided history tour of the city, the highlight of which (besides the included snacks) was a stroll around Kelly Ingram Park and a visit to the 16th Street Baptist Church – “ground zero” for the civil rights struggle in America. The whole area has a powerfully sacred aura about it, and I was so moved by the history and symbolism of the place that I actually forgot about eating – briefly.

Speaking of eating, we also visited the historic Alabama Peanut Company where we sampled some quintessentially southern boiled peanuts. This was my second time to try them, and they are still the least peanutty-tasting, peanut-shaped things I’ve ever eaten – other than those orange marshmallow candy circus peanuts that are like chewing on a banana-flavored flip-flop. Boiled peanuts are similar in taste and texture to cooked beans – if beans had to be eaten two at a time and came in a soggy, inedible shell full of saline solution.

We found ourselves snackless again when the tour took us to the Sloss Furnaces National Historic Landmark – because who doesn’t want to explore a dilapidated industrial complex that looks like the ideal location for a serial murder? Seriously, though, the hulking and labyrinthine site was magnificent – even in its state of rusted ruin, and learning about the countless laborers who spent decades in the oppressive heat and noise of the enormous furnaces reminded me of why I became an English major.

The last stop on our tour was Vulcan Park, situated atop Red Mountain and featuring the world’s largest cast iron statue, depicting Vulcan, Roman god of iron, the forge and, based on his rear view, pantlessness. The park offers an impressive cityscape view for those visitors who are able to avert their eyes from Vulcan’s massive metallic badonkadonk.

After the tour, we attended the NSNC awards banquet where we had a flavorful meal of baked salmon and white beans (or maybe they were boiled peanuts) and were honored to visit with legendary columnists from around the country, some of whom even applauded an East Texas goofball when I received my award.

Our weekend getaway to Birmingham was fun and enlightening for my wife and me, and I’m hopeful that she’ll forget all about the cookie incident before she starts picking out my burial underwear.