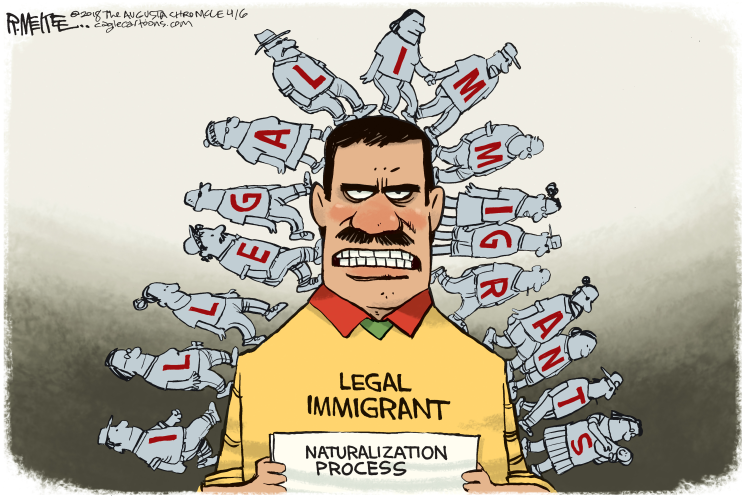 “With President Trump, you never know.” Those were the exact words a U.S. Senate legislative aide said to me when we were talking about President Trump’s immigration views. The specific topic at the time was deferred action for childhood arrivals, DACA, which candidate Trump had vowed to end on “Day 1” of his presidency, but didn’t. In part because of President Trump’s DACA dithering, the program and its future have since devolved into a political and legal quagmire.

President Trump’s most recent fumbling and bumbling came during a Michigan rally when he said, to his base’s horror but to the powerful agricultural lobby’s delight, that “we have to have your workers come in,” a reference to issuing H-2A agriculture visas, a program that its critics say is systematically abused.

Just days before President Trump’s speech, the Labor Department settled with G Farms, a Maricopa County, Arizona, agribusiness, on the grounds that it had subjected its grossly underpaid workers to “simply inhumane” conditions. G Farms had housed 69 guest workers in overcrowded, unsanitary semi-truck trailers and school buses, where they were exposed to Arizona’s summer heat without proper ventilation, and with dangling gas lines fed through bus windows.

The no-cap H-2A visa should be a national embarrassment because it enables agricultural employers to import vulnerable, easily exploitable individuals. The farm industry takes advantage of the susceptible while neglecting its own responsibility to enter the 21st century through mechanization. Sharing in the blame is the federal government which, through the H-2A, sanctions modern day cheap, pliant slave labor. In 2014, Indiana University published its study which found that, because employers control their visas, legal temporary guest workers are guaranteed to be underpaid and can’t advance in the labor market.

Growers contend that without easy access to cheap labor, “crops will rot in the field.” Crops that don’t rot, agricultural representatives claim, will soar to unaffordable retail prices, the mythical $20 avocado. A wealth of nonpartisan academic research undermines the advocacy groups’ allegations. In its 2016 overview of the effect of farm labor costs on consumer prices, National Geographic reported that if workers’ wages increased by 47 percent, grocery bills would go up just $21.15 a year, or $1.76 a month. Those findings are consistent with other academics’ conclusions, including those from Iowa State, the University of California Davis and the Economic Policy Institute.

The H-2A visa and the ample supply of cheap labor it makes readily available have slowed mechanization’s progress and eliminated growers’ incentive to pay wages high enough to attract American workers. Historically, the solution to labor shortages, assuming employers can document their existence, is to pay more, not to hire illegal immigrants, a crime, or lobby for more employment-based visas.

Case in point: In 2017, Christopher Ranch, which grows garlic on 5,000 acres in Gilroy, Calif., announced that it would hike pay for its farmworkers from $11 an hour to $13 an hour that year, or 18 percent, and then to $15 in 2018. The result: the ranch went from having a worker shortage to having a 150-person employment waiting list.

Created in 1952 as part of the Immigration and Nationality Act, the H-2A requires employers to seek Americans first, a condition that they’ve ignored too long, in large part because of the federal government’s willful blindness towards its abuses.