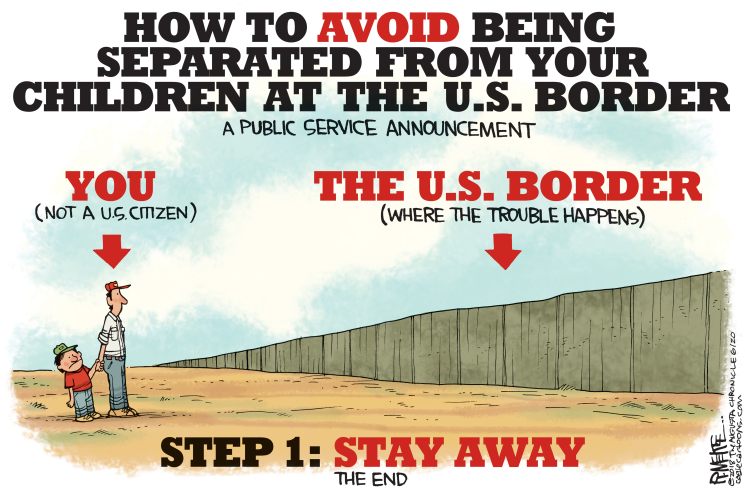 Back on Father’s Day, I got a call from another Dad, my friend Billy Inman. Billy’s call must have been tough for him. On Father’s Day 2000, intoxicated Mexican national and illegal alien Gonzalo Harrell-Gonzalez, driving above the speed limit, killed Kathy and Billy Inman’s 16-year-old son, Dustin.

The family had stopped at a red light on their way to a fishing trip when Harrell-Gonzalez rear-ended them. Despite being in the U.S. illegally, Harrell-Gonzalez received a North Carolina-issued driver’s license. Kathy sustained injuries that would keep her in a wheelchair for life; Harrell-Gonzalez fled to Mexico where he remains today.

Family separation’s root cause isn’t overly harsh immigration laws, but foreign national parents who knowingly violate U.S. federal law. Consider the manner in which the children, often accompanied but sometimes traveling alone, arrive at the border: crossing miles of desert on foot, traveling atop trains, being handed off to human traffickers or swimming across the Rio Grande River under duress. The U.S. would classify those actions as crimes of felony child abuse, which carry a possible lifetime prison sentence, and most certainly would lead to custody loss.

In a nationally televised interview, National Border Patrol Council Vice-President Art Del Cuerto explained what he and his agents see each day. Compare Del Cuerto’s from-the-front reality reporting to the purposely distorted perspectives from some at Capitol Hill and newsrooms. Del Cuerto said that daily his agents see migrants “literally drop the child and run” to escape capture. In egregious cases, Del Cuerto said that children are stuffed into vehicle trunks, then handed off to coyotes. As for the so-called cages the minors are allegedly detained in which has created a media circus this week, Del Cuerto described them as, in reality, “similar to boarding schools.” For example, Casa San Diego offers the children play areas, language classes and hot meals before they’re eventually released to sponsors.

One solution is already available to migrants. According to Attorney General Jeff Sessions, migrants who enter through a national port of entry with their children can request asylum. Parents would not be prosecuted and the family unit would remain intact while the petition is adjudicated. Another potential fix could keep asylum-seeking migrant families together: Designate the U.S. Embassy in Mexico City as the starting point for all petitions – no congressional action required, and neither minor nor adult would be confined while officials decide the case.

The U.S. welcomes valid asylum claims. “Valid” is key. According to the Transactional Records Access Clearinghouse, nearly 80 percent of more than 15,000 of the asylum claims made between 2012 and 2017 from El Salvador were denied. Pursuit of a better life or other economically motivated reasons are not valid asylum claims. A 2017 Pew Research report found that El Salvadoran, Guatemalan and Honduran migrants cite economic opportunity as among their main reasons for traveling north.

In midst of the frenzy about illegal immigrants separated from their children, the nation would do well to remember that the Inman family, the Kate Steinle family and thousands of other victim families endure the forever-lasting pain of separation that is the result of illegal immigrants’ criminal actions.

I asked Billy what Kathy and he feel when they watch the wall-to-wall mainstream media’s frenzied coverage. Billy said that he hurts for every child kept from his parents, however briefly. But for Kathy and Billy, Dustin was permanently taken from them 18 years ago, and counting. In most cases, the Central American minors face separation of a few days.

On a personal note, I lived in Guatemala, and traveled extensively throughout Central America. My takeaway from my time spent with Central Americans is that, overwhelmingly, they want to stay with their people, their language, and their culture. Removing asylum loopholes would go a long way toward establishing common sense on the border.