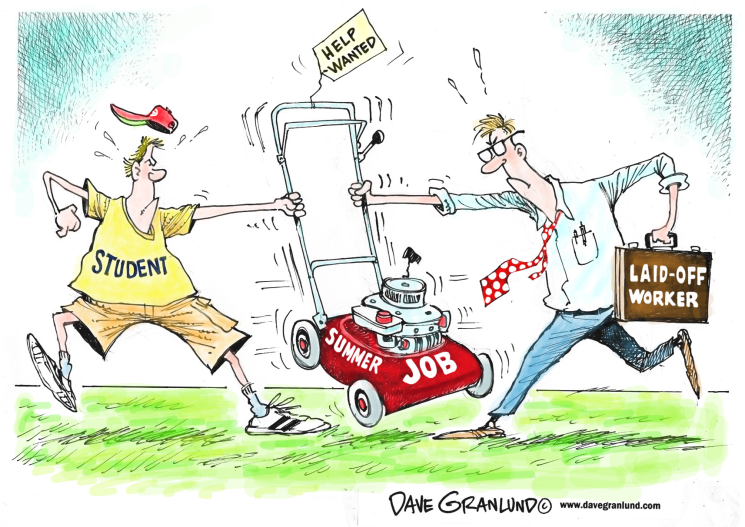 Summers come and go. And some are more memorable than others - better weather, extraordinary family road trips or exciting new adventures.

But for decades, all summers have one sorry common denominator - the continuation of the State Department's Summer Work Travel (SWT) program. Despite compelling, irrefutable evidence that SWT harms job prospects for young American workers, the program keeps on ticking. When those young U.S. workers lose employment opportunities to international students, they miss out on the chance to earn money they could use to pay college tuition, develop on-the-job experience or pay down their debt load.

In brief, here's how the decades-old SWT program works. The State Department, under the guise of initiating valuable cultural exchange between international nations and the U.S., provides J-1 visas to young foreign nationals. The J-1 visas provide employment authorization. So, right off the bat, the program is problematic. The more international kids who compete for a relatively small pool of summer jobs, the more difficult it becomes for U.S. youths to find jobs - Economics 101, supply and demand.

But where the equation gets completely thrown out of whack is when an employer considers that his J-1 workers are not subject to a minimum wage requirement and that he isn't legally obligated to pay their Social Security, Medicare, and federal and state unemployment taxes. Nonpayment of these taxes that would apply to Americans is an employer bonanza. And little (if any) federal oversight of the SWT has allowed unscrupulous employers to work their international employees' fingers to the proverbial bone without overtime or regard for their personal safety.

The list of J-1 abusers is long, and ranges from big corporations like Hershey to small Myrtle Beach tourist joints. The international students have not only been cheated out of their rightful wages, but the promised comfortable accommodations have not been delivered. Instead, the J-1s, thousands of miles away from their Eastern European, South Asian, Central American and Caribbean homes, are often housed in inadequate, dangerous apartments or cheap motels.

The latest SWT bad actor, Grand America Hotels & Resorts, has a shameful history of hiring and exploiting foreign labor. In 2014, Grand America paid a $2 million fine to the Department of Homeland Security for employing illegal immigrants who used fake names and falsified documents to get their jobs. An employer like Great America, with its documented criminal record of violating U.S. employment laws, should, by definition, be excluded from the SWT program. But, as mentioned earlier, the State Department doesn't concern itself with SWT oversight.

To the surprise of no immigration analyst who has studied the SWT's disgraceful pattern for years, when the State Department allowed Grand America to participate in the so-called foreign exchange program, one of its workers reported in a federal lawsuit filed against the company that he and others were routinely plied with energy stimulants so they could work 16-hour shifts. The maximum work week allowed under SWT guidelines is 32 hours.

In 2017, The Wall Street Journal reported that President Trump's administration was considering reducing the number of visas issued under SWT. Two years later, the same old, same old remains the status quo even though the SWT could be quickly ended, and no one would miss it. The winners are the cheap labor-addicted businesses who cry foul and predict bankruptcy whenever their sources of pliant workers are threatened. Other winners include the unscrupulous placement agencies that charge thousands of dollars in fees to naeB/ve international youths, and make promises they can't meet.

The losers are the unsuspecting foreign workers who anticipate a cultural experience but get instead a rude awakening into quasi-slave labor. Also on the short end are U.S. students who want to work, and foolishly expect that the federal government will protect their best interests.

Unfortunately, the government has proved time and again that it can't develop a visa system that works on Americans' behalf or end a program like the SWT that it knows is a dismal failure.