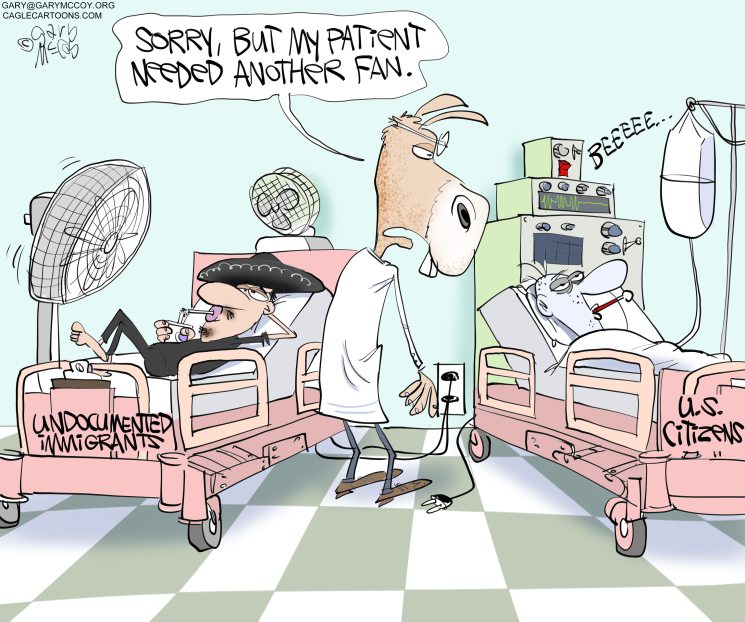 At the Border, the Word is Out: Come One, Come All

A Harvard University Center for American Political Studies/Harris Poll showed that immigration is now voters' top concern, surpassing health care as the nation's No. 1 issue. By a 42-38 margin, registered voters selected immigration as the major issue. Given that stories from and about the porous southwest border have dominated the news cycle for months, the poll's finding aren't surprising. Mark Penn, the poll's co-director, said that as the border crisis' "full nature" became evident, voters' awareness increased correspondingly.

The Harris Poll results have apparently not reached the Swamp, where congressional Democrats remain locked in a fierce battle to outdo each other in efforts to encourage more illegal immigration and promote more amnesty seekers whose claims may be invalid. Among the bad ideas immigration advocates irresponsibly floated are decriminalizing illegal entry and free comprehensive health care for residents regardless of their immigration status. The obvious consequences of such lax policies would be to incentivize illegal immigration to levels never before seen or even imagined.

The current record for preposterous pandering by immigration extremists - certain to be short-lived - goes to New Jersey Sen. Cory Booker. The junior senator who aspires to be the 2020 Democrat candidate for the White House, polling at less than 5 percent, traveled to Mexico to help five women who had been returned to their native country to file asylum claims. Border conditions are bad enough without dangling yet more carrots in front of a global population anxious to take advantage of what is widely known. That is: The U.S. immigration system is in chaos due to political extremism that allows anyone who gets to and across the border to stay.

In his insightful, sobering Atlantic article, "America's Asylum System Is Profoundly Broken," writer David Frum painfully spelled out the border challenges, noting the huge numbers of people entering our country. In May 2019, 133,000 aliens were apprehended on the southwest border, and, barring a significant change, the likely 2019 fiscal year total will exceed 1 million.

The prospective asylees come from dozens of nations. No distance is too far to travel, and no sum too great to take advantage of the loophole-filled U.S. immigration laws that will eventually lead to lawful permanent residency, citizenship and work authorization. A smuggler's going rate to transport Central American aliens to the U.S. border is thousands of dollars.

With the human flood, stateside charitable organizations that pledged to help a recent 300-stong Central African caravan quickly ran out of money. In San Antonio, a destination preferred by Central Americans and Africans, the city and various charities spent more than $600,000 in just a few months. But with no end in sight to the border surge, cities like San Antonio that want to help are trapped between a rock and a hard place. The compassion is there, but the money isn't.

Lost in the well-intended rush to help the African migrants are San Antonio's struggling residents. San Antonio is ranked among the nation's poorest cities, and has nearly twice the poverty rate of Washington, D.C. The San Antonio mayor said that the expectation with the 2019 budget is to bring San Antonio's poorest neighborhoods up to par with other, more well-served parts of town. But with so much money going toward needy and unanticipated foreign-born asylees, San Antonio's poor, both citizens and immigrants, are unlikely to get much of a financial boost.

To be optimistic about border conditions may be foolhardy. After The Atlantic published Frum's article, U.S. Customs and Border Protection, Del Rio, Texas, sector, announced that since June 10, more than 1,000 Haitian nationals, mostly family units, had been arrested. Prior to June 10, the Del Rio sector had arrested only 17 Haitian nationals during the entire fiscal year. Overall, Del Rio reported a doubling in arrests to 40,000 over the prior fiscal year. More than 80 percent of those arrested are from countries other than Mexico.

Congress must recognize that the border tragedy isn't a partisan issue, and that innocent people are being lured to the U.S. where, in most cases, municipalities can't provide adequate care. Closing the immigration law loopholes, which a cooperative Congress could do, would slow the flow, a result that would keep migrants from making the dangerous journey to the U.S. and ensure that scarce funding first be directed to America's poor.