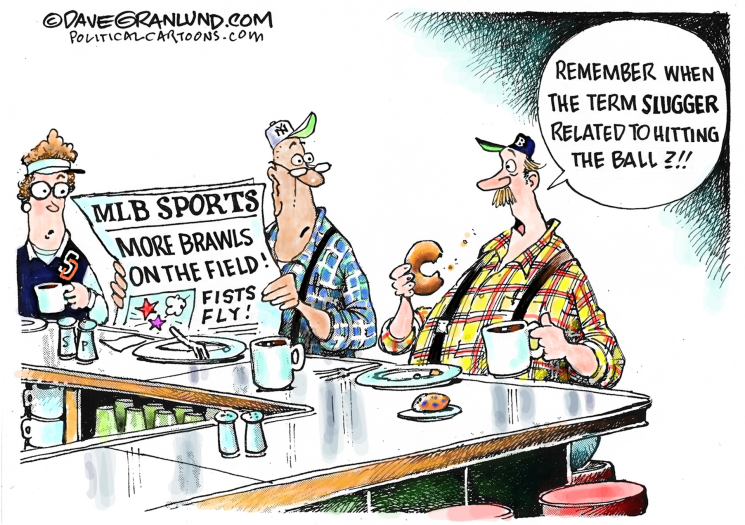 Time was, baseball bugs circled Independence Day as a milestone on their calendars.

First, baseball's longstanding axiom held that the team in first place on July 4 was the likely pennant winner. Second, July 4 offered fans a host of doubleheaders - two games played one immediately following the other for the price of a single admission. On Independence Day 1956, the New York Yankees took on the Boston Red Sox. That afternoon, fans watched the year's Most Valuable Player, Mickey Mantle, three-time MVP Yogi Berra, and the best hitter who ever lived, Ted Williams, all Hall of Famers. Berra, by the way, caught both ends of the double dip, just as he did 117 times without complaint during his storied career.

Those were the days of two leagues and 16 teams. Today, there are 30 teams, six leagues and multiple playoff levels. With so many games played, the July 4 barometer no longer holds true. And owners long-ago realized that offering two games for the price of one was financial folly. Now, if cancellations force make-up doubleheaders, fans have to endure the insulting day-night split admission.

When owners, players and their union conspired to eliminate regularly scheduled doubleheaders, they also killed off the traditional holiday rivalries that sparked such passion among their devotees. Baseball has new, less compelling traditions - the opener, the four-inning start, instant replay, the Google All Star ballot, and games played overseas in Tokyo and London to grow the $10 billion ML--internationally. Selling more caps and t-shirts abroad is a new and potentially unlimited revenue source.

Harken back to what was perhaps baseball's all-time greatest, most intense holiday rivalry that dates back to 1867 and intensified after 1902 - the American Association's AAA Minneapolis Millers versus the St. Paul Saints. On the days that led up to those holiday twin bills played on Memorial Day, Independence Day and Labor Day, local residents spoke of little else. Crop prices, the summer weather and U.S. Sen. Hubert Humphrey's speeches paled in significance to passionate arguments about upcoming big games.

The Millers and the Saints often played against each other 22 times. But the jewels were those holiday doubleheaders. The opening morning game would be played in one city, and the afternoon contest in the other. Cranks, as they were called in the early 20th century, walked across the bridge over the Mississippi River that connected St. Paul and Minneapolis, or they took public transportation. The games were the thing, and fans would not be denied.

As for the Saints, in back-to-back 1947 and 1948 seasons, Brooklyn Dodger three-time MVP Roy Campanella broke the American Association's color line, and Edwin "Duke" Snider patrolled the St. Paul outfield. Duke hit .316 and slugged 12 round trippers in just 66 games. For his part, Campy in only 35 games, batted .325, slammed 13 homers, and drove in 39 runs, forcing the struggling Brooklyn Dodgers to recall him. Campy's bat prowess was good news for Verlene Price Booker's extended family of 15. Each homer that Campy slugged won him a free case of Wheaties from Minneapolis-based General Mills. Campy donated his winnings to the Booker family.

In 1960, Washington Senators' owner Calvin Griffith received MLB's approval to move his franchise to Minneapolis where in 1961 the team became the Twins.

Sadly, big league baseball's arrival in the Twin Cities marked the end of the historic, decades-long Millers-Saints intense competition that thrilled countless thousands. But the Saints-Millers games live on as an important part of baseball and America's history.