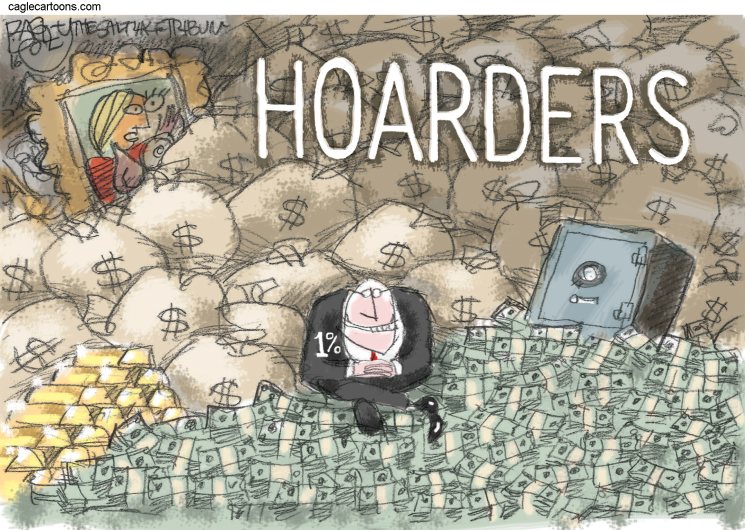 A recent Economic Policy Institute Study titled “CEO Compensation Has Grown 940 percent since 1978” is a Labor Day lament for American workers whose wages during the same period have only increased a meager 12 percent.

EPI’s analysis found that this exorbitant, unconscionable earnings differential is the major income inequality contributor, and has persisted through equally indifferent Democrat and Republican administrations.

In its analysis, EPI emphasizes that CEOs earn more not because of demand skills, extraordinary productivity or other tangibles, but rather because of their absolute power to set and increase their pay scales. As a result of soaring CEO incomes, and more generally, higher executive compensation, the top 0.1 percent and 1.0 percent income brackets have exploded, while workers in the lower 90 percent of the earnings’ bracket have been left in the cold for more than four decades.

EPI also noted that the economy wouldn’t suffer if CEOs were paid less or taxed more, or if profits were distributed more fairly among all employees.

CEOs have unquestionably taken full advantage of their power to enrich themselves, and suppress lower-echelon employee wages. But another variable that contributes to 40 years of flat wages for hourly workers is the executive suite’s addiction to cheap, foreign labor.

With what has been an unbroken inflow of illegal immigrant and legal guest workers, between 750,000 and 1 million annually, corporations have no incentive to increase domestic workers’ salaries – and they haven’t.

Unwittingly, a New York Times story provided an excellent example of how the immigration variable depresses the domestic salary scale. In “Is Immigration at its Limit? Not according to Employers,” so many immigrants have come to the South Florida area that not enough labor is available to fill all the restaurant, nursing home and retail store jobs.

The story was a typical immigration cheerleading piece that offered the well-worn and misleading talking points. From Douglas Holtz-Eakin, former Congressional Budget Office director and now the immigration advocacy group American Action Forum’s leader: “Without immigration, we shrink as a nation.” Holtz-Eakin added that two ingredients drive GDP growth – the size of the workforce and how efficiently those workers produce goods and services.

Columbia Business School Dean Glenn Hubbard has a better understanding of GDP. Last year. Hubbard said that the goal isn’t GDP, but rather to deliver mass prosperity that makes people feel like they’re all part of the same system instead of being left behind. Hubbard calls his theory the economics of dignity, something that the EPI study confirmed that the U.S. has moved far away from.

Hubbard and others would also be skeptical of how more immigration into South Florida could contribute to mass prosperity. By 2030, the state’s population is projected to increase from today’s 21 million to 26 million – with that unchecked growth comes more traffic, more sprawl, more school overcrowding, higher housing costs and a lower quality of life.

That immigration grows the economy is the age-old, half-truth argument. Sure, more people and more workers create a bigger economy. But immigration does not help the per capita income. Immigration’s benefits accrue to the immigrants and to their employers, and not the general public. The traditional solution to filling job openings is to offer higher wages, not import more cheap labor. With more than 6.1 million people unemployed, that pool should be tapped first.

Congress will soon reconvene, but as it has been for too many legislative sessions, creating a fairer immigration system that protects instead of harms American workers isn’t on the agenda.