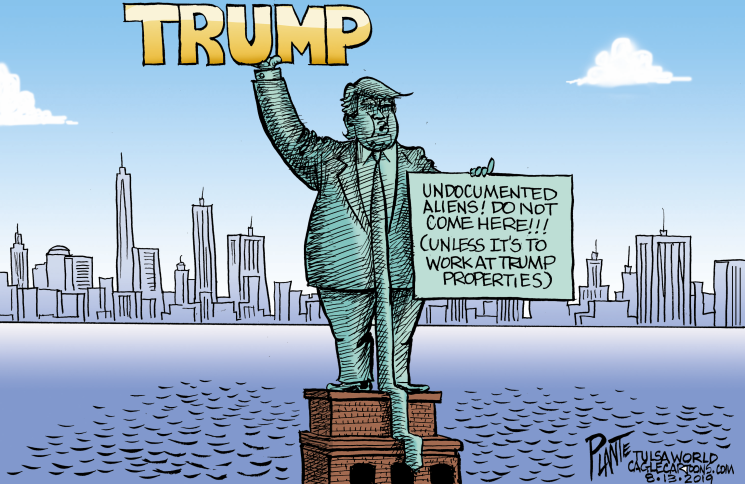 Every time an immigration conflict appears on the horizon, expansionists press for one of two solutions: amnesty or broader guest worker programs. Most often the push for more comes from Beltway lobbyists, but often the pressure emanates from within the sitting administration's cabinet members. George W. Bush's confidant and Secretary of State Condoleezza Rice is a good example.

Today, President Trump has his immigration nemesis in Agriculture Secretary Sonny Perdue. At the recent convention for the National Association of State Departments ofAgriculture in Albuquerque, Perdue said that an expanded federal guest worker program with a year-round valid H-2A visa for non-ag would go a long way toward solving the nation's immigration problems. But that would spell potential danger ahead. Non-ag is a huge category that would open the door for ag workers to secure higher paying construction and manufacturing jobs that citizens and lawful residents should hold.

Perdue proceeded to defend his theory with grossly misleading and borderline preposterous claims. According to Perdue, most Central American ag workers have no desire to become U.S. citizens, but rather just want to "come and go" to support their families. But Perdue's simplistic and uninformed analysis conflicts directly with what has been an increasingly steady and growing influx of Central American asylum seekers who, specifically, hope to be granted lawful permanent residency and ultimately citizenship.

An established immigration waffler, Perdue's guest worker enthusiasm is unsurprising. As Georgia's governor, Perdue was recognized as tough on immigration and signed bills that reflected his enforcement perspective. But just before Perdue left office in 2010, his attitude softened, especially toward migrant farm labor.

The last thing U.S. workers need is another guest worker program, most notably one that would further reduce low-skilled laborers' employment chances. To begin with, but apparently unbeknownst to secretary Perdue whose department must certify the labor applications, a program already exists that offers growers the opportunity to import as many cheap labor workers as they need.

The temporary, nonimmigrant H-2A visa, designed exclusively for ag and intended to cover work periods that don't exceed one year, grants the workers up to three years to stay in the U.S. before they must return home. A 2017 study found that during that period, the laborers were paid less than half the national average wage. Not surprisingly given the overhead savings the H-2A represents, growers' reliance on it has increased dramatically during the last decade.

Like most employment-based visas, the H-2A has been riddled with fraud. The Labor Department pledged to work aggressively to eliminate abuses. But such promises are standard and generally meaningless. Moreover, for the most part, H-2A workers pick three crops: blueberries, apples and tobacco. But mechanical blueberry harvesting is a grower option that is proven to be time-effiicient and labor saving. Ditto for apples; robotic tobacco picking is still in development.

There are other advantages machines offer to growers. They can operate 24/7 and will dependably be around season after season. From immigration skeptics' perspective, machines won't be separated from their families, file asylum claims or petition their family members to join them in the U.S.

The message that Perdue should be delivering to his audience enamored of cheap labor is that the time has come for them to enter the 21st century ag world and adopt mechanization, now heavily relied on worldwide.