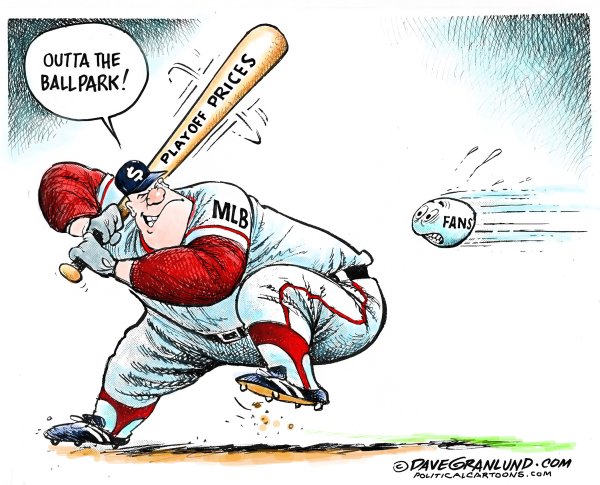 Luckily for MLB, the two games featured four of baseball’s historic and most revered teams. Television rating were high, but the games were a slog, especially for East Coast fans. The American League contest was a tedious 3:13 hours, and the National League’s game was played at a quicksand-like 4:15 hour pace. The Dodgers-Cardinals face off was a tight 3-1, but most East Coast viewers missed the exciting Chris Taylor bottom-of the ninth home run that sealed the Dodgers’ victory.

For dinosaur fans that yearn for fewer and speedier playoff games, the forecast is grim. In 2022, the fondest wish of MLB owners will come true when a new collective bargaining agreement will expand the wild card from its current one-game, sudden death format to the best-of-three. More than half of baseball’s 30 teams will be post-season eligible, and inevitably MLB will expand to 32, thereby further diluting the talent pool that fans pay a king’s ransom to watch. As a results, the playoffs will endlessly grind on with impossibly long, overlapping seasons.

Post-season’s qualifying standards have plunged since 1968, when the Detroit Tigers topped the American League and advanced straight to the World Series and won — no championship series required.

Ten times in history, teams have won 100 plus games and not even qualified for playoffs. Led by batting champion Norm Cash and his .361 average, the 1961 Tigers won 101 games, but finished eight games behind the Yankees. That’s the way it should be. Teams that feel deprived when they don’t get past the wild card have a simple solution: win more games during the season. Under the projected format, however, teams under .500 that qualify for the playoffs will be commonplace.

Unhappy fans might as well throw in the towel. Money overrides all other considerations. As money-hungry MLB Commissioner Rob Manfred said: “Baseball is a growth industry. Eventually, we’d like to get to 32 teams.” Under the new set-up, MLB owners and players will cash in. The league currently grosses more than $10 billion annually. With two new clubs, the owners would likely add $2 billion or more in expansion fees, and new media rights’ revenues.

Players are all-in on expansion, too. As part of the new collective bargaining agreement, players also win. More team revenues will mean higher minimum salaries, and player-friendly free-agency agreements. Today, baseball’s minimum salary is $572,000 — the average is $4.2 million — and the most eye-popping incomes are the Los Angeles Angels’ Mike Trout, a $427 million contract paid out over 12 years, and the New York Yankees’ Garrett Cole, $324 million spread out over nine years. Trout and Cole’s annual incomes are $37.7 million and $32.4 million, respectively.

In his giddy anticipation of never-ending revenues, Manfred is overlooking one important variable. Baseball’s television audience is dwindling. The under-18 market doesn’t care about baseball, a sport they consider too boring. Once baseball’s most passionate fans, youths have shifted their allegiance to soccer, basketball and football. Older fans, another of baseball’s traditional backbones, are dissatisfied with the constant changes, and have lost interest.

Younger and older fans agree that baseball’s most important games, the playoffs and the All-Star Game, start too late; they yearn for old-fashioned day games. Kids go to school, adults work. All-Star Game television ratings have been in free-fall for years, and bottomed out in 2021 when only 8.2 million tuned in.

Baseball is on a collision course with overkill, and many consider its death overdue. No fan, young or old, is naïve enough to think that Manfred cares about baseball. His self-confessed mission is simple: let’s follow the money.