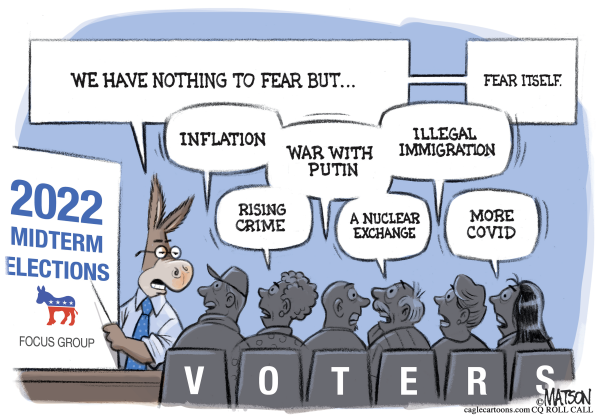 Showing complete indifference to his party’s fate, President Joe Biden is doing all he can to damage Democrats’ chances for election in the upcoming mid-terms and his re-election in 2024.

Biden’s resolute determination to harm the Democrats may be explained several ways. At age 79, Biden has achieved his lifelong goal of becoming president. After at least two failed efforts in 1988 and 2008, and possibly a third failure, depending on how the facts are interpreted from 1984, Biden is finally in the White House.

Another possible explanation is that Biden knows Democratic leadership considers him, at best, inconsequential, and that Barack Obama is still embraced as the party’s hero. Biden has no reason to care about his fellow Democrats’ fate if they’re indifferent to him. At a White House event to celebrate Obamacare’s 12th anniversary, Biden wandered alone and aimlessly as his apathetic Democratic colleagues flocked giddily around Obama.

Maybe the most obvious reason explains everything. At age 79, Biden is too old to care about his 2024 political future. He’s climbed the White House Mountain; no taller summit remains to conquer.

Perhaps the best indicator of Biden’s reelection disinterest is his refusal to heed his personal, confidential polling firm’s advice on the key issues that concern the nation, specifically immigration and inflation. A New York Times article, “Biden Received Early Warnings that Inflation and Immigration Could Erode his Support,” shows the president has recklessly and lawlessly pressed ahead on open borders and illegal immigration.

Early on in his presidency, according to the article, Biden enjoyed strong national support, but his favorability quickly eroded as the border crisis intensified. The John Anzalone-headed research team found that because voters feel that Biden and his deputies are clueless when it comes to designing a plan to combat the festering border crisis, immigration represents an intensifying vulnerability for the president.

Biden’s failure to slow migration is, the pollsters concluded, “starting to take a toll.” As early as last spring, when trafficked unaccompanied minors strained Health and Human Services capacities, pollsters warned that “immigration is the only issue where the president’s ratings are worse with our targets than with voters overall.” And on July 9, “President Biden continues to hold weaker, negative ratings on two hot-button issues [immigration and crime] that have been recently bubbling up.”

Despite his pollster’s immigration red flags, and the unanimous national consensus that Vice President Kamala Harris’ discover-the-root-causes solution to migration is a bad joke played on U.S. citizens, on May 23, Biden intends to lift Title 42, which has been an important tool in turning away illegal border crossers for health reasons. A Louisiana federal judge’s temporary restraining order that the administration has agreed to honor may delay Title 42’s removal, but if it's shelved, DHS officials anticipate 18,000 illegal immigrants a day will flood the border.

DHS Secretary Alejandro Mayorkas announced what he optimistically labeled as a plan to cope with the historic surge. The costly concept includes spending more taxpayer money on medical support, and more funding for air and ground transportation to release the migrants into the interior from the border. As a footnote to its plan, DHS added that it will use Expedited Removal more frequently. Border agents scoff at the mere suggestion it will be a useful tool. Once aliens claim fear of persecution if returned home, an Expedited Removal converts to a notice to appear which migrants rarely honor. Migrants are spreading the word among each other that the keys to getting U.S. residency are the words, “Fear of Persecution.”

The Times story misses the point, perhaps purposely, about Biden and his cronies. The administration didn’t need to pay taxpayer funds to a professional pollster to advise it that Americans are unhappy. Biden et al don’t care. The arrival of mostly poor, unskilled, limited English-speaking aliens from 150 nations through mass immigration is a fundamental elitist goal.

While the 2022 mid-terms and congressional control may be at risk in the short-term, the long-term picture that will erase the middle-class and end American sovereignty looks rosy to the Biden administration.