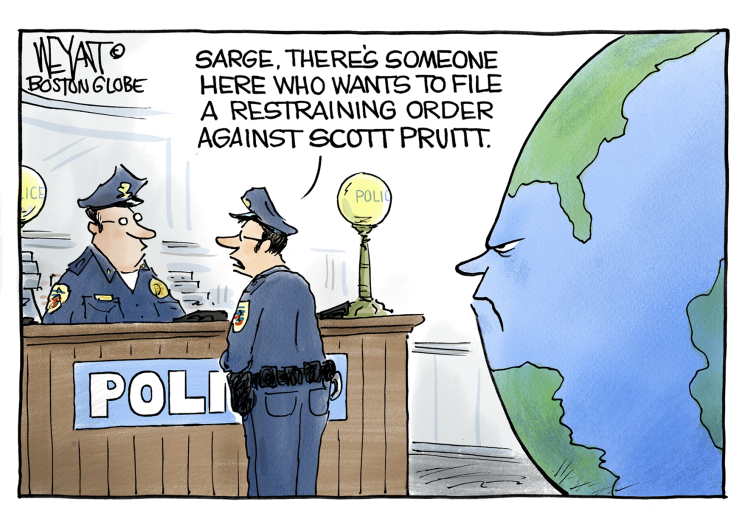 U.S. Rep. Lou Barletta, a Republican who hails from northeastern Pennsylvania’s coal country, likes to brag about the fact he was one of his state’s earliest supporters of President Donald Trump.

Insofar as he rewards displays of loyalty, Trump is backing Barletta’s bid to unseat U.S. Sen. Bob Casey, D-Pa., this fall in one of the country’s more closely watched U.S. Senate contests.

So it was entirely unsurprising that, in a recent interview, Barletta, who’s running in a two-way primary for the GOP nomination this spring, toed the Trump party line.

He fulsomely praised the president’s successes and papered over his failures, both foreign and domestic, even as he wondered aloud about “what there is to be unhappy with” under the 45th president’s chaotic reign.

It was about as thorough a display of sycophancy as you were likely to see from a card-carrying member of a Republican Party whose principles and convictions have been left to scar horribly on a portrait hidden in the attic, even as GOP lawmakers try to present a sunny, tax-cutting, and unlined face to the rest of the nation.

But on the day that the nomination of White House physician Ronny Jackson’s nomination to run the Department of Veterans Affairs went up in a mushroom cloud, Barletta was still maintaining, with a toothy grin that verged on rictus, that Trump had done an effective job of draining Washington’s swamp.

Which depends, one supposes, on how one defines “change.”

Jackson, in case you’ve forgotten, is the Navy vice admiral whose nomination to run the VA was put on seemingly indefinite hold amid questions about his dispersal of medication; the fostering of a hostile work environment and possible drunkenness on duty that date to his time in the former Obama administration, The Washington Post reported.

And never mind Special Counsel Robert Mueller’s ongoing probe of Russian meddling and the indictments and guilty pleas left in its wake. Nor the scandal surrounding Trump’s personal attorney Michael Cohen, or the ongoing media mastery by the adult film actress Stormy Daniels.

Let’s not forget that Trump also engineered the firing of former Secretary of State Rex Tillerson, and ushered former National Security Advisor H.R. McMaster out the door. Former Chief of Staff Reince Priebus was also among those who headed for the exits.

In the vacuum created by their departures, Trump has surrounded himself with a Team of the Like Minded, in the form of new National Security Advisor John Bolton, Secretary of State nominee Mike Pompeo and economic advisor Larry Kudlow.

Current chief of Staff John Kelly, who was supposed to serve as a check against Trump’s worst excesses, has proven spectacularly unable to accomplish that basic task. The former Marine general even walked in his boss’ footsteps when he engaged in an own ill-chosen war of words with a Florida congresswoman.

The reshaping of Trump’s inner circle that puts personality above party and principle is reflected by a wave of GOP retirements on Capitol Hill. Republicans running nationwide this primary season, meanwhile, are embracing the Trump mantle, loudly proclaiming their loyalty to the White House.

That approach might work in the primaries. And Trump may be cheered by a GOP remade in his own image. But the White House and Congressional Republicans could pay dearly for it in a season that is expected to favor Democrats.

So Barletta and his ilk can go on whistling merrily past the graveyard that holds the remains of the Ed Gillespie and Roy Moore campaigns. But they may yet wonder what kind of deal they’ve struck.