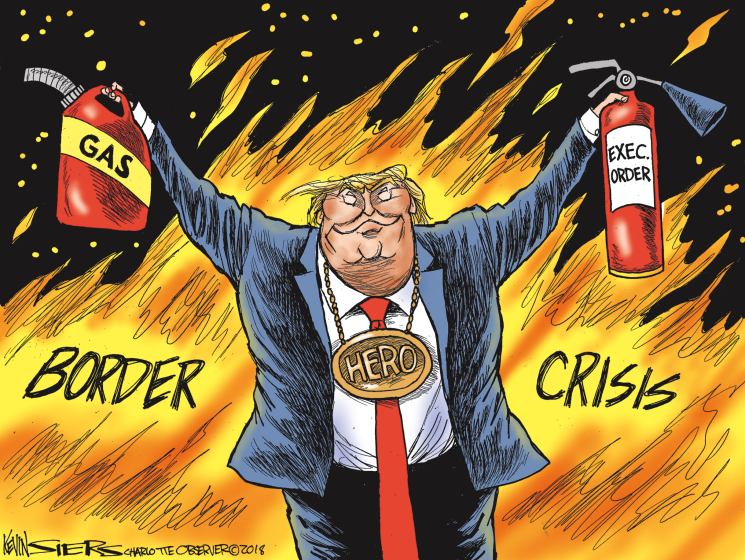 Earlier this week, U.S. Sen. Pat Toomey, R-Pa., thought reports of children being brutally separated from their parents at the United States’ southern border with Mexico were “greatly exaggerated.”

After he found himself the subject of withering criticism, Toomey found the forced separations and warehousing of migrant children “heartbreaking” and he credited President Donald Trump for at least signing an executive order ending the practice, for now.

“Separating children from parents who enter the country illegally is heartbreaking and President Trump is right to stop the practice,” Toomey said in a statement on Wednesday afternoon.

Trump doesn’t deserve credit from Toomey, which came after nearly immediate, introspection, or any other Republican.

The president’s executive order, cleaning up his own mess, now only means that children and their families will be detained together – perhaps indefinitely – as their immigration status is adjudicated.

Thus giving the president credit for the executive order is kind of like confronting a child who’s spilled his own milk and then asks for a pat on the head for cleaning up after himself.

Trump and his lieutenants have been flailing to justify the policy, offering conflicting answers and even transparently cynical biblical justification for the forced separation policy.

As recently as Thursday morning, Trump was not backing off from his policy, tweeting that “the Fake News is not mentioning the safety and security of our Country when talking about illegal immigration. Our immigration laws are the weakest and worst anywhere in the world, and the Dems will do anything not to change them & to obstruct-want open borders which means crime!”

Trump may have bowed to overwhelming national, international and spiritual pressure as he ended a policy, instituted by his own administration (not Congress, not Democrats) that was both politically disastrous and morally odious.

But the administration is still pursuing its zero-tolerance policy of criminally prosecuting as many illegal border-crossers as it can as Congress works to cobble together an immigration reform package that probably doesn’t have the votes to pass.

The pivot, which could result in entire families being detained in military facilities, “[calls] up some of the worst moments in our nation’s history,” Adanjesus Marin, director of the advocacy group, Make the Road PA, said in a statement. “Families belong together, free from the fear and trauma these bars and cages create.”

That’s because the executive order directs the U.S. Department of Homeland Security to keep families in custody “to the extent permitted by law and subject to the availability of appropriations,” The Washington Post reported, adding that’s “language that points to the government’s deficit of detention space for parents with children.”

As The Post notes, ICE operates two, large family detention centers in Texas, and a smaller one in Pennsylvania, which have a combined capacity of about 3,000 beds. As of June 9, “the three facilities had nearly 2,600 of those beds occupied, according to the latest available ICE figures.”

The added wrinkle is that court cases limit how long children can be kept in custody.

So while Trump may have solved an immediate political problem – the policy was hideous news for Republicans running in this fall’s mid-term elections – it also leaves a slew of unanswered questions in its wake.

For one, how will lawmakers fix America’s immigration over the long haul to avoid the mishmash of court decisions and executive actions (by Democratic and Republican presidents alike) that opened the door to Trump’s disastrous action.

That wasn’t immediately clear. On Thursday, the U.S. House abruptly postponed a vote on a high-stakes immigration reform bill. House Republicans reportedly planned another vote on Friday, after revising the bill to win over holdouts.

The best hope for reform continues to be some iteration of the bipartisan deal that passed the Senate in 2013. But in this toxic climate, with a president who only plays a dealmaker on TV, the idea of a long-term resolution seems remote at best.