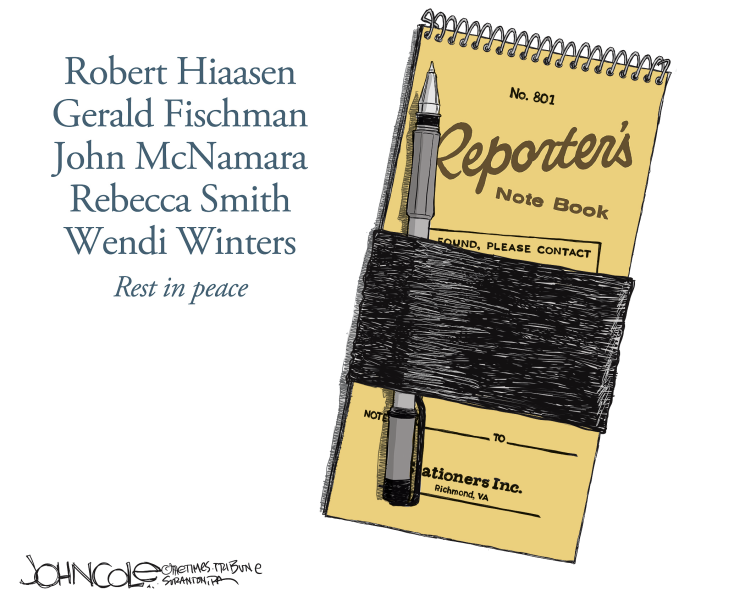 If you stay in the news business long enough, you’re inevitably going to run into a reader who has a grievance – sometimes legitimate, sometimes not – against their hometown newspaper.

I have been on the receiving end of those complaints. And it can occasionally be profoundly unpleasant.

But these aggrieved readers rarely, if ever, march into a newsroom and open fire on the people with whom they have that disagreement.

Last week, Jared Ramos, 38, was arrested and charged with killing five journalists, and wounding two more people, at The Capital-Gazette of Annapolis, Md. Published reports indicated that he a had a long-standing grievance with the newspaper, one that he took to a murderous extreme.

As a matter of full disclosure, I’ll note that, years ago, I interviewed for a job at The Capital-Gazette. It ended up not being the right fit. But I remember the staff and editors there as kind-hearted and dedicated professionals, and my soul just aches for them and their community.

The day after the shooting, journalists across the country, including those at my employer, went to work under a new normal. Sometimes, armed guards greeted reporters where previously there had been none.

It was a weird way to feel. But it might also be a necessary one.

There are people in all kinds of jobs – soldiers, law enforcement officers, teachers – who go to work in the morning and just want to make it home safely to their families at the end of the day.

After all, anything that brings us closer to our readers and empathizing with their day-to-day concerns is a good thing. It makes the reporting better. And it makes us better people as well.

And now we know, a little bit better, what that feeling is like. And hopefully, if we do it right, and we’re smart about it, that perspective will inform our journalism.

Local papers are funny. People are invested in them. They feel a sense of ownership, even in a time when a local paper’s actual ownership may be many hundreds of miles away in the headquarters of some journalism conglomerate (or hedge fund).

Local news outlets are a reflection of their community – the entire community, irrespective of skin color, political beliefs or creeds. It can be difficult to capture and reflect that myriad of voices sometimes. But we keep trying anyway.

It helps that the journalists who work at local news outlets live in their communities; they shop at the same grocery stores, attend the same churches and send their kids to the same schools.

Like our readers, we sweat paying the same bills, save for the same rainy days and try to sock away a little extra cash for that week at the beach in the summer.

We get our hands dirty cutting the grass. We turn up the radio when a good song comes on. And we get angry when our favorite team loses (don’t even get me started on the Orioles right now).

But there is a sense right now that journalists are somehow the other. And some of that is our fault. And I have given serious thought to the consequences of my words.

And some of it is the product of external forces.

But on a day like this, when five families aren’t going to have their loved ones coming home to them, none of what’s different about us matters.

If you try hard enough, you can find a way to disagree with almost anyone about anything. Finding the common ground becomes a rarer and rarer thing.

It now just feels like one of those times when there’s way more to bring us together than to set us apart. We can get back to arguing tomorrow, if that’s your thing.

Maybe, right now, we all just take a breath.