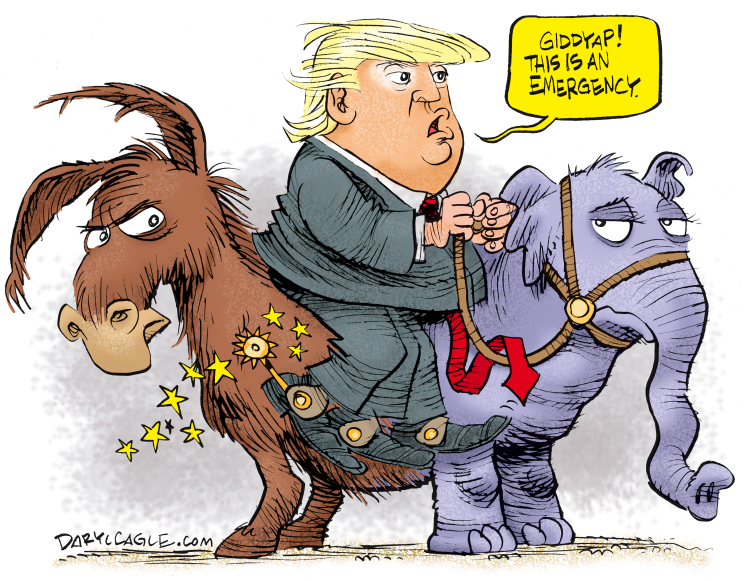 The experience of two Republican lawmakers from Pennsylvania – a state that President Donald Trump won in 2016, and one that remains critical to his reelection chances – tells us a lot about the state of the GOP in 2019.

First up, there’s Pat Toomey, the Keystone State’s junior senator. If Pennsylvania voters know one thing about Toomey, it’s that he frequently plays it cagey, waiting until the last moment until he goes public on a big issue.

That’s what happened in 2016, when Toomey refused to say whether he’d vote for then-candidate Trump.

Locked in a tight re-election race, Toomey made disapproving noises in the direction of the Republican nominee, feeling like a “no,” only to announce, at the final second, that he’d voted for Trump anyway.

The outrage over that bait-and-switch was huge. Toomey had positioned himself as an independent thinker, only to fall in line and do something so predictably Republican that it dinged his credibility at home.

Toomey finds himself at a similar point again this week, now that the majority-Democrat House, with some Republican support, has approved a resolution nullifying Trump’s executive end run around Congress on the border wall.

As in 2016, Toomey has been publicly indecisive, saying that while he “continues to believe that the president’s $5.7 billion border wall funding request was reasonable … [he] hoped this dispute would have been resolved through the legislative process. I am concerned about the president’s emergency declaration, and am still considering how I will vote on a resolution of disapproval.”

You can forgive some Pennsylvania voters for being skeptical about Toomey’s sincerity. The chances are good that he’ll probably end up voting with his fellow Republicans here.

Which brings us to the case of Toomey’s fellow Pennsylvanian, Rep. Brian Fitzpatrick, who represents one of those classically moderate suburban Philadelphia districts you’ve heard so much about.

Fitzpatrick, who was reelected in 2018 in a part of the state where Democrats cleaned up, has emerged as a principled voice of opposition to the Trump White House.

He voted with Democrats this week on the nullification resolution and a bill that would require universal background checks on all gun purchases.

He also joined with Democratic members of the state’s Congressional delegation and Democratic Sen. Bob Casey to ask the Pentagon to fully explain how money being diverted to the wall would affect about $200 million in military construction projects back home.

As the House geared up for that nullification vote, Fitzpatrick uttered perhaps some of the most consequential words by a Republican in this young Congress.

Explaining his looming “no” vote, Fitzpatrick said his action was “much bigger than any one issue, and any one president. This is about the Constitution, the separation of powers, and about setting precedents that apply equally to all future Congresses and all future presidents.”

Fitzpatrick is a former FBI agent. He’s a straight-shooter. And that’s about as clear-eyed a statement of principle that you’re going to find in the Washington swamp.

It’s also a roadmap for Toomey and other Republicans who might be on the fence about voting against the president on his likely unconstitutional power grab.

Toomey, who can be thoughtful and deliberative when the occasion arises, also likes to fancy himself a creature of the Senate and a defender of the institution.

He could decide that the Constitution and precedent win out over the White House not getting its way on what, really, is a simple budget vote.

A lot of eyes will be on Toomey in the coming days as the Senate gets ready for its mandatory nullification vote. If he’s smart, Toomey will have one eye on Fitzpatrick, who’s providing smart Republicans with a way forward.

Even if they don’t regain the House in 2020, more Fitzpatrick-style Republicans could help the GOP reclaim something even more important.