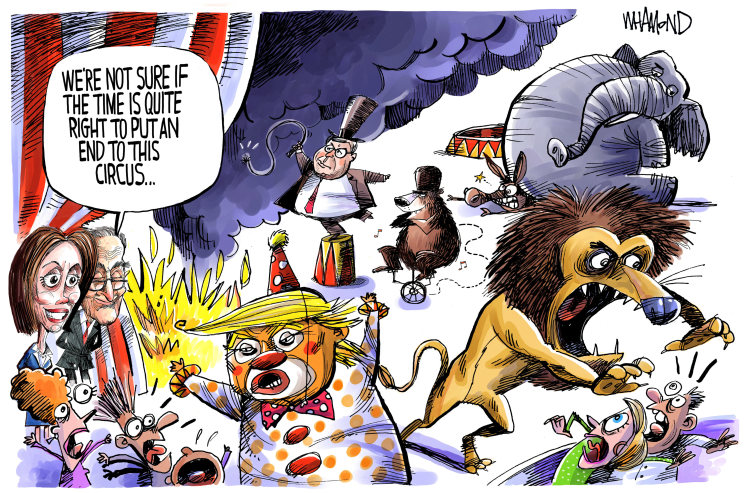 (Ext. 10 Downing Street, nighttime. The lights of London shine in the late evening. Revelers wander in and out of pubs. Big Ben stretches imperiously against a July sky. Inside No 10, a phone rings.)

(The aide disconnects the call,shakes his head,and presses a button.)

Theresa May (groggily): "Do you know what time it is?"

Aide: "Yes, Prime Minister, I apologize for the lateness of the hour. But you're going to want to hear this one. It's our man in America, ma'am, the ambassador, Kim Darroch. Well, it appears that there's been a leak of some diplomatic cables to the Mail on Sunday."

Aide: "Well, you know the ones, ma'am. The ones where he called the American president "inept" and "insecure?" And the White House "dysfunctional?"

Aide: "Oh, no, ma'am. Of course, not We've known that since Day One. It's just that, well, President Trump, is on the Twitter again. And he's throwing all of his toys out of the pram. He's in a right snit."

Aide (consults laptop, reads, his eyes twinkle with amusement): "Well, Prime Minister, he said that Sir Kim is 'a pompous fool,' and a 'very stupid guy.'

May (laughs): "'Stupid guy?' Isn't this the same president who said the American rebels captured airports during their adorable little 'revolution' all those years ago?"

Aide: 'Yes, Prime Minister. But there's something worrying. He says the American government won't work with Sir Kim anymore because of his candor. They seem to want him fired."

May: "Hmmm ... remind me, would you, what has President Trump said about other countries and their leaders?"

May: "No, no. We'll be here all night. Just give me the greatest hits. Pretend we're on 'Top of the Pops.'"

Aide: "Well, there was that time when he called Prime Minister Trudeau of Canada 'dishonest and weak.'

"Then, there was the row over him calling Mayor Khan of London "a stone, cold loser," who was "foolishly nasty" to him over his visit here in June "And, of course, there was that whole thing about him dismissing 's**thole' countries.'"

Aide: "It's called 'The Onion,' Madam Prime Minister. And no, all of this really happened. The American newspaper, the Washington Post, which I believe President Trump also mocks because it's owned by that Bezos chap who's richer than he is, ran a whole list of insults by Trump and his diplomats this week."

May: "Wait, American diplomats have been rude overseas too?"

Aide (taps more keys, brings up the Washington Post story): "Oh, absolutely Prime Minister. You'll recall the U.S. Ambassador to the Netherlands, Pete Hoekstra, said video of him saying there were parts of that country that were 'no-go' zones because of 'the Islamic movement was 'fake news.' The Post reported that Dutch journalists filleted him at his first news conference over his false claim and demanded an apology."

May: "Wait? What? Are these career diplomats doing this?"

Aide: "Oh, no, Prime Minister, no career diplomat would be that crashingly dumb.They're political hacks. Both were former lawyers to President Trump."

May: "And they were fired, course?"

Aide: "No, Prime Minister. Both still have their jobs."

May: "And yet Trump doesn't want to deal with Sir Kim?"

May: "All right, draft up a resignation letter, and have Sir Kim sign it. Make it look convincing. Add something flowery like, "The professionalism and integrity of the British civil service is the envy of the world. I will leave it full of confidence that its values remain in safe hands."

Aide: Yes, Prime Minister. Absolutely. But we're really not going to fire Sir Kim for being right about Trump are we?"

May: "No, of course not. Don't be absurd. We're going to wait a respectful period of time and then do what anyone would do to reward an employee who does their job well. We're going to promote him. Ask Sir Kim how he feels about being our man in Bora Bora, would you?"

Aide: "I'll get right on it, Prime Minister."