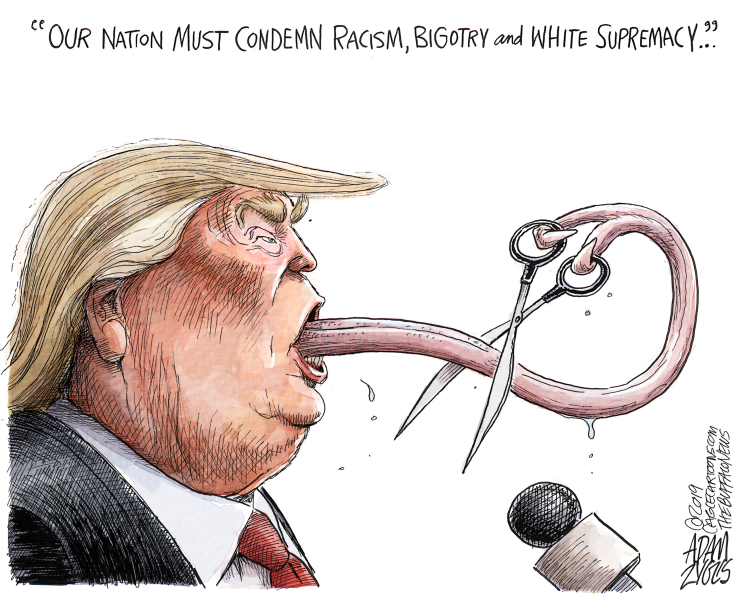 Forget the teleprompter. If you want to know what President Donald Trump really thinks, turn to Twitter.

And so it was Tuesday, barely a day after lambasting the evils of the Internet and social media, that America’s troller-in-chief was back in his element. Before 8 a.m., he had claimed that Google executives told him that they “didn’t help Crooked Hillary over me in the 2016 election,” and retweeted the usual sycophancy by his favorite news outlet that Trump’s critics were “pushing a racist narrative” in the midst of a campaign season.

And this from a guy who, on Monday, apparently unironically concluded that “open wounds cannot heal if we are divided.”

And that’s not even 24 hours after Trump, in a nationally televised address from the White House, with Vice President Mike Pence looking blankly on, called on Americans to set “destructive partisanship aside,” and to speak in “one voice” to “condemn racism, bigotry, and white supremacy.”

Trump’s remarks Monday were delivered in the same dispassionate monotone he’s adopted whenever he’s reading words that someone else has written for him – and words that he doesn’t believe. But, ever the reality television star, he’s adopting the “President with Gravitas” stock image that he believes conveys seriousness and empathy.

To find the real Trump, you go to his rallies.

That’s where you find the footage of him angrily describing an “invasion” by migrants at the southern border. That’s where you find him dismissing, as he did in a May rally in Florida, a voice in the crowd suggesting that the solution to that invasion is “shoot[ing] them?”

To find the real Trump, you go to Twitter.

We’re barely two weeks removed, after all, from the 45th president speaking in the most disparaging and racist of terms about four minority women members of Congress. And we’re less than a week out from Trump seemingly celebrating a break-in at the Baltimore home of Baltimore Rep. Elijah Cummings.

The examples over the last two and a half years of Trump using the very social media he held responsible for birthing the toxic and evil anti-immigrant rhetoric that apparently motivated the accused shooter in El Paso are seemingly innumerable.

So how can Americans be asked to honor Trump’s requests to set aside toxic partisanship, when he returns to it again and again, like a moth to the flame?

The simple answer: They can’t.

Compare that rhetoric to Trump’s immediate predecessor, former President Barack Obama, whom Trump hasn’t been shy about denigrating on Twitter or on the stump.

Without ever mentioning Trump by name, Obama said in a statement that Americans need to “soundly reject language coming out of the mouths of any of our leaders that feeds a climate of fear and hatred or normalizes racist sentiments.”

And where are the congressional Republicans stepping up to point the finger of blame where it belongs for the coarsening of our political dialogue? You have to look long and hard to find them.

In a conference call with reporters on Monday, Republican Sen. Pat Toomey of Pennsylvania demurred when he asked whether Trump’s remarks about migrants had helped feed the madness behind the carnage in El Paso.

But Toomey, who has been critical of Trump in the past, did allow that “the president does occupy a unique office and has a unique bully pulpit to bring the country together to help in the healing process and foster the best possible discourse. And I hope he will continue with the constructive tone he had [Monday] morning.”

If Trump wants a better America, he can start with himself. But, by now, there’s no reason to think that will happen.