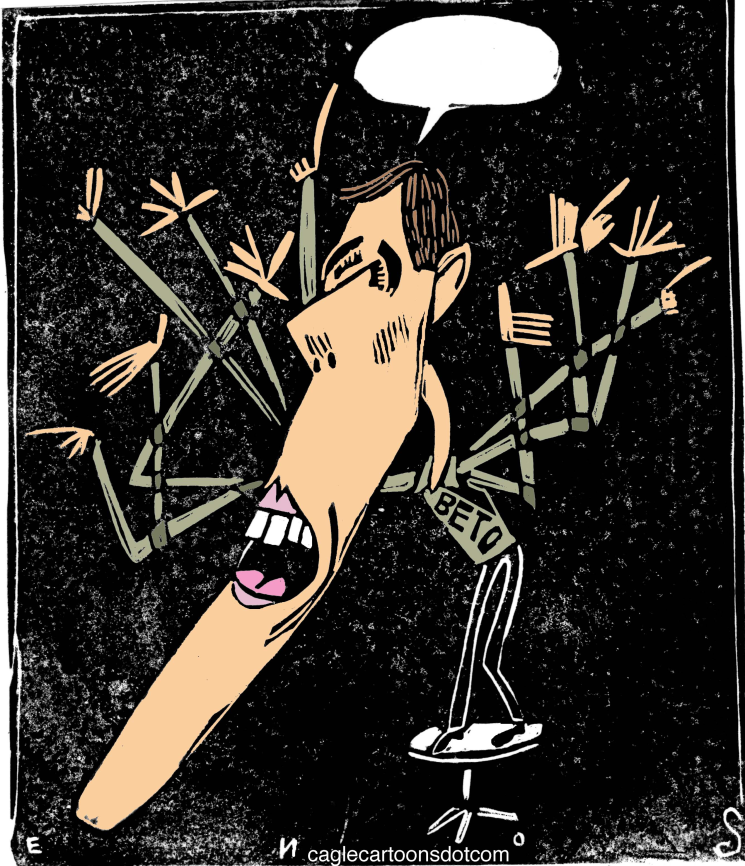 What if Beto O’Rourke was right?

The former Texas congressman enraged the right and netted himself something that sounded an awful lot like a death threat when he vowed during last week’s debate to ban (and apparently confiscate) AR-15s and other assault weapons favored by mass shooters.

Critics immediately pounced. In a single, emotion-charged sentence, O’Rourke appeared to confirm the most feverish fears of the NRA and other gun-rights extremists – that the government really is coming for their guns.

It was exactly the sort of reaction you’d expect, and it may also have been exactly what O’Rourke was hoping for, since he’s been doing a slow fade in the polls. And now we’re all talking about him again.

But what if, putting aside the debate stage theatrics, O’Rourke was right?

I’m going to argue that he mainly was.

It’s long past time for America to again ban these weapons of war, which were illegal to purchase from 1994 to 2004. And one of the best ways to get them off our streets is through a nationwide buyback program – not through any sort of confiscation program, which would surely lead to unrest.

And, as PolitiFact notes, “in raw numbers,” researchers at New York University’s medical school found that mass shootings decreased when the ban was in effect and rose afterward. In fact, “the death toll from mass shootings went from 4.8 per year during the ban years to 23.8 per year afterwards.”

Last week, Pennsylvania Republican Sen. Pat Toomey, who’s pushing an expanded background checks measure in the Senate with Democratic Sen. Joe Manchin, of West Virginia, said O’Rourke’s call to confiscate these weapons was an “an awful and extreme” idea that would derail any efforts at “commonsense” reform.

I disagree with Toomey on that count. Surely the world’s greatest legislative body is capable of, as the saying goes, walking and chewing gum at the same time.

Congress can conduct a debate on both expanding background checks and a potential assault weapons ban.

Toomey is right, however, that the kind of mandatory buyback envisioned by O’Rourke, and based on a similar program in Australia, more than likely would not garner the votes for passage. A voluntary program, however, just might.

Momentum for an assault weapons ban is growing in the House. Assuming it can whip up the votes, the chamber’s Democratic majority should pass a ban and then drop it in the collective laps of Majority Leader Mitch McConnell, and President Donald Trump.

Obviously progress is likely to stop there, but the House could then force both of them to explain their inaction to the rest of the country when we’re inevitably having the same discussion again after the next mass shooting.

The passion underlying O’Rourke’s comments on Thursday, the rage he felt after two shootings in his home state in less than a month left so many dead and wounded, is understandable.

So maybe after the fury over O’Rourke’s comments dies down, we can all consider the fundamental truth behind the Texan’s comments on ABC’s debate stage.

It’s an assault on common sense that we haven’t banned these weapons. And the time for action is upon us.

Trump Is Dragging A Dead Woman Through The Mud

by Dick Polman
Timothy Klausutis, an innocent American who was despicably victimized on social media this month by Donald Trump, has written an extraordinary letter to the CEO of Twitter. This excerpt will bring you up to speed: "Nearly 19 years ago, my wife, ...
Why We’re ‘Not All In This Together’

by Christine Flowers
So many of us are parked in front of our television sets these days, more out of necessity than desire. After hundreds of hours of viewing, of clicking the remote because I'm too lazy to walk the 3 feet and manually change the channel, of enduri ...
Panic As Expiration Date on Trump’s Immigration Order Approaches

by Joe Guzzardi
Time is short to the expiration of President Trump's Executive Order that suspended some immigration, and expansionists are pulling out all the stops. At stake is employment-based visas' short-term future, specifically whether the White House wi ...