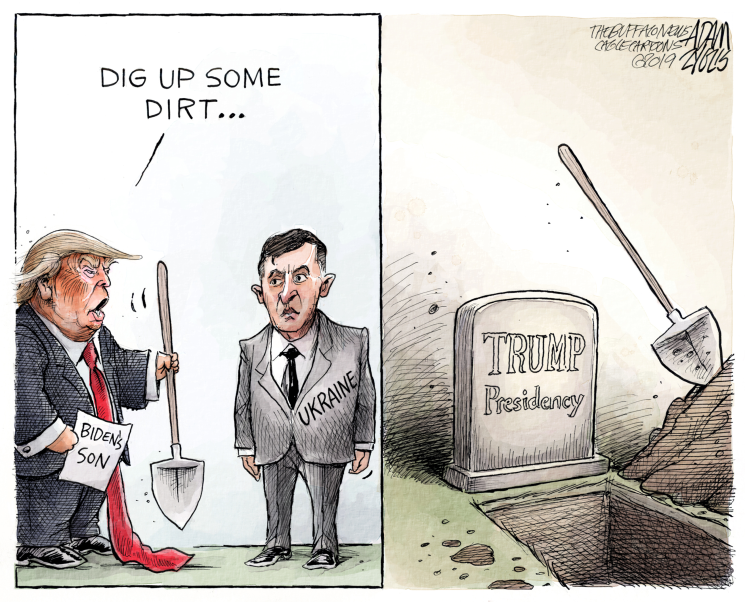 The explosive release of a federal whistleblower complaint alleging that President Donald Trump abused the power of his office, and that "unidentified White House officials" then attempted to cover it up, is sending shockwaves throughout Washington.

And while the underlying details of the complaint were eye-opening and alarming, its fundamental premise was not.

Given the choice between protecting and promoting his own interests, or the interests of the nation he was elected to govern and whose Constitution he swore to uphold, Trump's interests win every time.

From crassly pitching his ailing Doral resort in Miami as the site of the next G7 meeting to revelations that the Air Force essentially propped up a Trump property in Scotland to a lawsuit alleging that Trump is illegally profiting from his hotels and restaurants in Washington, D.C. and New York, the priorities of America's reality star-in-chief have been on public display for months.

But there is something so singularly offensive about Trump's utterly transparent request for dirt on former Vice President Joe Biden from Ukrainian President Volodymyr Zelensky. It makes every previous assault on our Democratic norms by the narcissistic 45th chief executive look like an amateur hour performance in comparison.

"In the course of my official duties, I have received information from multiple U.S. government officials that the President of the United States is using the power of his office to solicit interference from a foreign country in the 2020 U.S. election," the whistleblower wrote in a 7-page memo.

Trump, predictably, has pushed back, dismissing the Congressional impeachment inquiry as the latest iteration of the ongoing "witch hunt." He can bluster and deflect as much as he wants, but the undeniable proof of his self-dealing is vivid in the rough transcript the White House released on Wednesday. It's an extraordinary exercise in mob-style shakedowns, prefaced by only the slenderest of pleasantries.

By early Friday morning, a majority of the House's membership - at least 225 of the 435 sitting lawmakers - supported some kind of impeachment action.

The bulk of those votes were overwhelmingly Democratic, though, as NBC News reports, they are not unified in voting to impeach Trump. Some Democrats, as well as Rep. Justin Amash, I-Mich., have asked for an inquiry, while others support an investigation initiated by the House Judiciary Committee.

Some Democrats, mainly from vulnerable districts, have yet to announce their intentions.

While much work remains for Democrats who serve on the six congressional committees charged with conducting the inquiry, it's more than safe to say that impeachment will become the definitional debate of the 2020 campaign.

Trump will use it to rail against Democrats in his hockey stadium rallies, as he carpet bombs his ever-loyal base with conspiracy theory after conspiracy theory. Democrats will use it as a cudgel in their ongoing argument that Trump lacks the fitness to lead. Everyone who believes something will continue to believe it, and the needle among loyalists won't move.

Where this gets worrying for Trump, beyond the prospect of carrying the mark of impeachment with him into history (assuming he and it get that far), is his standing among the independent voters who were so critical to his election in 2016.

The Mueller affair, while damning, was difficult to quantify. Here we have, in the president's own words, an attempted shakedown of a foreign leader to secure his own re-election. And he's selling out the country to do it. Every voter who's seen an episode of "The Sopranos" can recognize that.

It's a nice presidency you got there. It'd be a shame if anything happened to it.