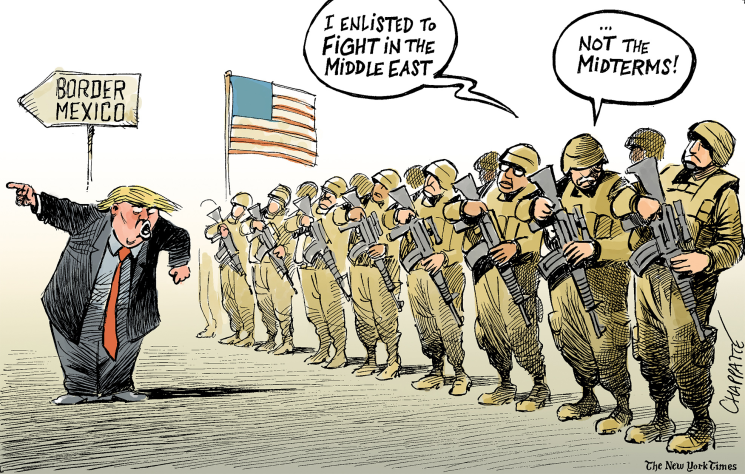 I ended a recent column observing that American taxpayers, not the government of Mexico or anyone else, was going to end up footing the bill for President Donald Trump’s border wall.

And now we know that a very specific segment of Americans, ones that President Sharpie has repeatedly professed to love, will bear the brunt of our petulant commander in chief’s vanity project: American soldiers and their families.

Last week, the nation learned that the Pentagon will either put the brakes on, or entirely suspend, more than 127 military construction projects, so that Trump can find the $3.6 billion – in American dollars, not pesos – he needs to fund construction of a barrier on the southern border with Mexico.

What’s worse, many of these cuts will directly impact the welfare and wellbeing of American soldiers and their families, the New York Times reported.

That includes funds for a middle school at Fort Campbell in Kentucky, a child development center at Joint Base Andrews in Maryland and an ambulatory care center at Camp Lejeune, North Carolina, according to the Washington Post.

None of this should be a surprise, of course. As often as Trump has told soldiers that “you really are our heroes,” as he did during a bizarre Thanksgiving 2018 phone call to American forces stationed overseas, the president has insulted or denigrated them with appalling regularity.

– He’s compared avoiding STDs to his own personal Vietnam, even as he received repeated deferments to avoid being sent overseas.

– In 2016, he engaged in a very vocal and nasty public spat with a Gold Star, Pakistani-American family who lost their son in Iraq in 2004.

– In November 2018, Trump skipped visiting Arlington National Cemetery on Veterans Day. Only a heaping portion of national scorn was enough to force him to make a visit a month later.

– That same year, he passed on a trip to French cemetery where thousands of American dead from World War I are buried, citing the rain. That didn’t stop other foreign leaders from braving the elements to pay tribute to perhaps one of the bloodiest conflicts in world history.

– He’s publicly clashed with such high-profile former military officers as ex-Adm. William McRaven, who oversaw the operation that led to the death of Osama bin Laden, and former Army Gen. Stanley McChrystal. Both had the temerity to criticize Trump’s leadership, according to CNN.

– His faux patriotic display on the National Mall on July 4 used the military as little more than props.

– In August, he said (perhaps jokingly, perhaps not) that he’s considered awarding himself the Medal of Honor, the nation’s highest award for military service, Politico reported.

This month, Trump got it half-right when he took a pass on visiting Poland to mark the 80th anniversary of the start of World War II because of the threat posed by Hurricane Dorian. Then he completely bobbled it by playing golf and incomprehensibly congratulating Poland for being invaded by the Nazis in September 1939.

And here we are again, with Trump raiding the Treasury – not to help soldiers, but to reinforce his own vanity and secure his own political fortunes. And roughly half the nation will be asked to make that sacrifice.

The Pentagon’s diversion of funds will affect “upgrades to infrastructure and training facilities at military installations in 23 states,” the Post reported, including the home states of some of Trump’s most ardent backers on Capitol Hill.

Upgrades to military bases in 19 foreign countries will also be impacted, and all at a time when American forces are being relied upon to carry a heavier load around the world.

And for what? A border wall that 60 percent of respondents to a recent Gallup poll oppose, even as an equally consistent majority support a path to citizenship for undocumented immigrants.

Trump has already acknowledged to lawmakers that actual immigration reform and enhanced border security are more effective than any physical barrier. Yet here the White House is, looting funds from badly needed military projects, just to satisfy Trump’s edifice complex.

Serving in the military is dangerous enough. One can’t help but wonder how much more of this “love” from the White House our forces can be asked to endure.