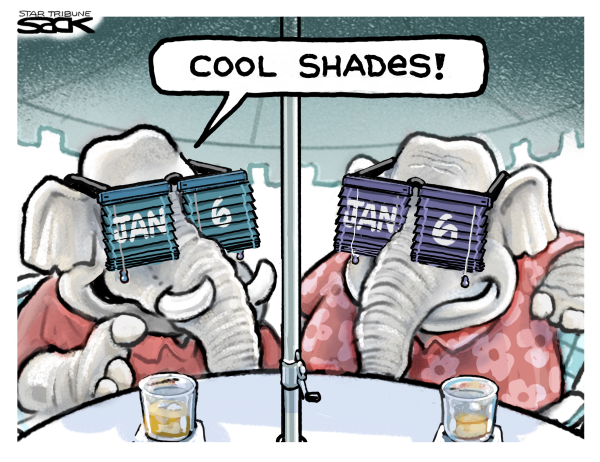 So just how desperate are some Republicans to deny the reality of the Jan. 6 insurrection at the U.S. Capitol?

Desperate enough that 21 of them voted against a slam-dunk of a bill earlier this week awarding one of the country’s highest civilian honors, the Congressional Gold Medal, to the law enforcement officers who defended them from the pro-Trump extremists who sacked the Capitol as the nation looked on in horror.

One of the lawmakers who opposed the bill, Rep. Scott Perry, a Republican and a veteran from central Pennsylvania, defended his vote, telling a reporter from Politico that the move to honor those brave officers was “all politics, it’s all garbage.”

He was one of several Republicans who objected to language in the resolution authorizing the medals that described the Capitol as a “temple of democracy,” and accurately described the events of the day as an insurrection.

Let’s pause for a moment to note here that the resolution authorizing the medals, which would be displayed at the Capitol Police headquarters, at the D.C. Metropolitan Police headquarters, at the Smithsonian Institution and in a “prominent location” in the Capitol, honors three officers who died as a result of the insurrection, according to The Hill, a publication that covers Congress.

The medal displayed in the Capitol would be accompanied by a plaque listing all of the law enforcement agencies who helped defend the Capitol against the crowd of white nationalists, off-duty police officers, veterans, and just plain wing-nuts, who stormed the building to try to stop Congress from certifying President Joe Biden’s election.

The resolution also specifically honors the heroism of then-Capitol Police Officer Eugene Goodman, who led the mob away from the Senate chamber on that fateful day, saving former Vice President Mike Pence and other senators. Goodman has since been named the Senate’s acting deputy sergeant-at-arms.

During a May interview on C-Span, where he defended his vote against a bipartisan commission to study the causes of the insurrection, Perry, who also opposed certification, downplayed the seriousness of the violence, telling a caller that “there was no arms that came in as far as I know, other than the people who were armed at the Capitol as security. No arms came into the Capitol with the people that did walk in,” WITF-FM in Harrisburg reported.

Perry’s assertions do not square with federal charging documents made public in relation to the attack, which identified a number of weapons including handguns, stun guns, chemical spray, baseball bats, and flagpoles that were wielded as clubs.

Perry also rebuffed a caller who said Republicans were afraid that a bipartisan commission would reveal GOP culpability in the attack, WITF-FM reported, saying that Republicans were “happy to have an open investigation,” and that “if people are culpable … justice needs to prevail in that regard.”

Which, it’s also important to note, is precisely what that bipartisan commission would have done.

But the GOP rewrite of the history of that day is in full swing. And with his “no” vote, Perry is complicit.

As offensive as it is, Perry’s defense of the indefensible is far from the most egregious. Consider the rationalizations offered by some of his ideological fellow travelers.

Another “no” vote, Georgia Rep. Marjorie Taylor Greene, told reporters that she “wouldn’t call it an insurrection.” Greene also dismissed the “temple” language resolution, saying “This not a temple. That is for sure,” Slate reported.

Rep. Thomas Massie of Kentucky sprained a rhetorical muscle trying to explain away the violence.

Massie further told CNN that “if they just wanted to give the police recognition, they could have done it without trying to make it partisan."

Again, the bill passed the House by a vote of 406-21. You can’t get much more bipartisan.

But that’s how far the Trumpified GOP has fallen, and how far it will go to deny the facts of a day that shook American democracy to its very foundations: Far enough that they will even deny honoring those who gave, as the what the greatest of all Republicans once described as, “the last full measure of devotion.”