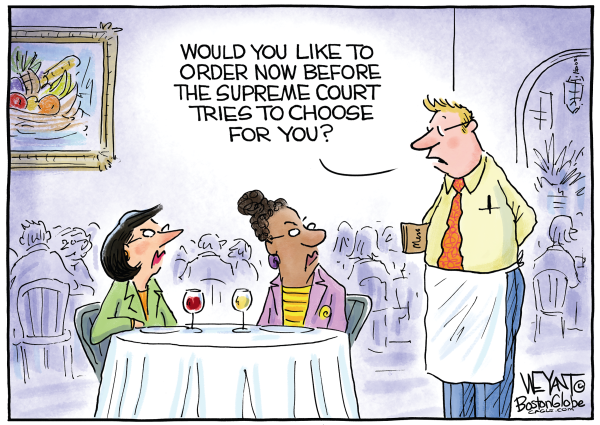 Even if you’ve only been casually following the fiery debate over abortion rights in the days since a leaked U.S. Supreme Court draft opinion eviscerating Roe v. Wade became public, you are likely well aware that there are deeply entrenched opinions among those who support and oppose abortion rights.

You also are probably aware that party primaries up and down the ballot, along with this November’s general election, have taken on an even greater importance as a result.

That’s because the party that ends up controlling state legislatures and Congress, along with governor's mansions across the country, will have a major say on the future of abortion rights across the state and the nation.

But let’s take the spotlight off the partisans for a moment, and shine it on that small bloc of swing voters, the persuadable and independent voters, who don’t always get the attention, but nonetheless can determine election results with the power of their ballots.

The end of Roe, or a substantial reshaping of abortion rights by the nation’s highest court, could help Democrats motivate their own voters and lure persuadable, pro-abortion rights Republicans to their side of the ledger, according to a new analysis by the University of Virginia’s Center for Politics and the Project Home Fire data analytics project.

Scoring respondents on a 100-point scale, based on the depth of their feeling, researchers asked Republican, Democratic and independent respondents: 1. How concerned they were about women losing access to safe and legal abortion services, and 2. Whether they believed abortion should be legal.

The responses among Republicans and Democrats were about what you would have expected of them, researchers found. Independent respondents, however, were more likely to land on the pro-abortion rights side of both questions, researchers noted.

Researchers also found that there were “a fair number of Republicans, Democrats, and independents who are somewhat in the middle on these questions (those who picked numbers ranging from 26 to 75 for both questions).

When it came to the question about whether a respondent was concerned about women’s access to safe and legal abortion services, "collectively, about 37 percent of all respondents landed in this category, including roughly equal numbers of Republicans (36 percent), Democrats (35 percent), and independents (39 percent)," they continued.

Those voters likely are “the kinds of people who may be persuadable either way on the topic of abortion,” the analysis found.

Meanwhile, preventing women from losing access to safe and legal abortion services “emerges as one of the stronger issues for motivating Democratic base and swing voters to get to the polls in 2022 and potentially persuading Republican-leaning voters near the Democratic vs. Republican dividing line to shift their voting intentions to the other side from their present leanings,” the analysis found.

Even so, data suggests that, overall, abortion is still a more powerful tool to motivate Democrats than it is in swinging persuadable Republicans, analysts cautioned.

But, and this a big but, “these voters present as open to maintaining a woman’s right to choose on abortion and the idea that America should be doing more to ensure this, not less.”

Whether that’s enough to trump bigger issues such as the economy and inflation or improve the field for Democrats in a year expected to favor Republicans was not immediately clear, the analysts wrote.

But it does mean that Democrats will have to do something that they’re demonstrably awful at doing, and that’s laser-focusing their messaging in the run-up to the November general election.

Stranger things have been known to happen. Not many. But some.