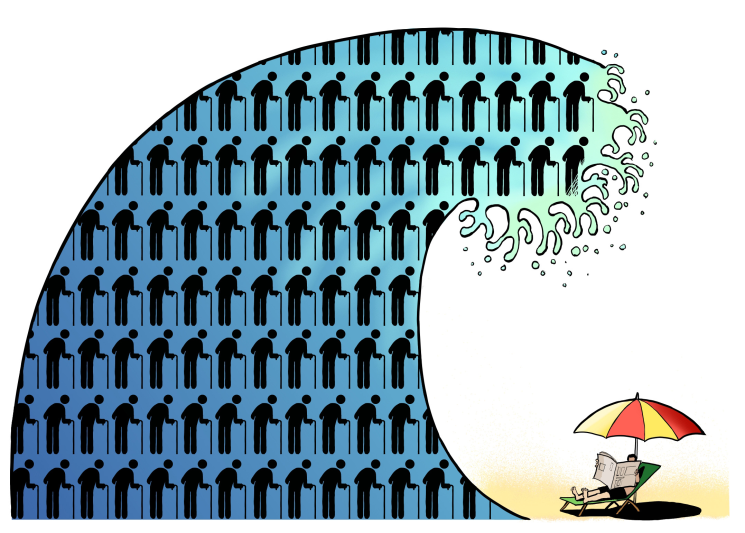 For some time, Tesla CEO Elon Musk has been using his ample platform to sound off about population: not the world's continuing, disastrous human population boom, but what he foresees as an impending population collapse.

At a time when the Earth continues to add more than 80 million people annually - because of so many more annual births than deaths (approximately 140 million vs. 55 million) - fears of a collapsing global population would appear to be misguided, uninformed or, at the very least, premature.

After all, every single day the planet must provide for about 220,000 more human beings than the day before, an extraordinary burden on the biosphere.

The weight of all humans alive today is an estimated 32 times greater than all terrestrial vertebrate wildlife - all wild mammals, birds, amphibians and reptiles combined! And tomorrow the ratio will be even more lopsided as long as the human population explosion continues.

We can't continue adding more people forever to a finite planet with a shrinking resource base and a beleaguered climate.

But what will end the population explosion: a decreasing birth rate or an increasing death rate?

Musk emphatically believes the former, and to some extent at least, he is right. The global birth rate has decreased by about 50 percent over the last half century. In countries as diverse as Iran, China, Brazil and the U.S., women are having far fewer children than they used to.

By and large, this has been a very good thing, for those women, their families and the overburdened Earth.

Yet Musk believes the pendulum toward lower births has swung too far, to such an extent that sub-replacement fertility rates in much of the world now portend imminent population shrinkage. He believes this is the biggest problem the world now faces, reiterating these views as recently as August 29 in Shanghai, China.

In a gabfest on stage at the 2019 World Artificial Intelligence Conference, Musk pontificated that: "Most people think we have too many people on the planet, but actually, this is an outdated view. The biggest issue in 20 years will be population collapse. Not explosion. Collapse."

Elon Musk may be a brilliant - if eccentric and erratic - pot-smoking entrepreneur, engineer, billionaire, visionary and wannabe colonizer of Mars, but he is no demographer. Neither is he an ecologist or environmental scientist. And it shows.

Many ecological and earth scientists like myself concur with Musk that the bloated human population may collapse in this century. But not from too many people going childless or having smaller families.

We believe that if it happens, population collapse will be from rising death rates as a result of human civilization having grossly overshot global carrying capacity, that is, the ability of Earth's environment and resources to sustain human population and consumption levels in perpetuity.

Professor Bill Rees of the University of British Columbia, inventor of the ecological footprint concept (out of which the carbon footprint emerged), has written recently that:

"The current population is well into 'overshoot', soaring beyond global carrying capacity... .contemporary population and economic growth are being 'financed' through the liquidation of once-abundant stocks of so-called 'natural capital' and by over-filling natural waste sinks. (That's what tropical deforestation, plunging biodiversity, ocean pollution, soil depletion and climate change are all about.)"

Rees adds that we must "conceive and implement a global fertility strategy to reduce the human population to the 2-3 billion people that might be able to live in material comfort on this already much-damaged single planet Earth."

"Climate change is simply one axis in a multi-dimensional problem that is environmental sustainability. They all stem from the same problem - too many people using too many natural resources. We probably already exceed the planet's carrying capacity by a factor of eight."

I trust these two (and many other) seasoned earth scientists' views on human population much more than I do Musk's. One gets the impression that he is more focused on colonizing Mars than safeguarding Earth.

If we humans cannot or will not voluntarily undertake the implied downsizing that is in order, nature will do it for us, but brutally.

Environmental scientist and wildlife biologist Leon Kolankiewicz is an advisory board member with Progressives for Immigration Reform. Contact Leon on Twitter @LJKolankiewicz.