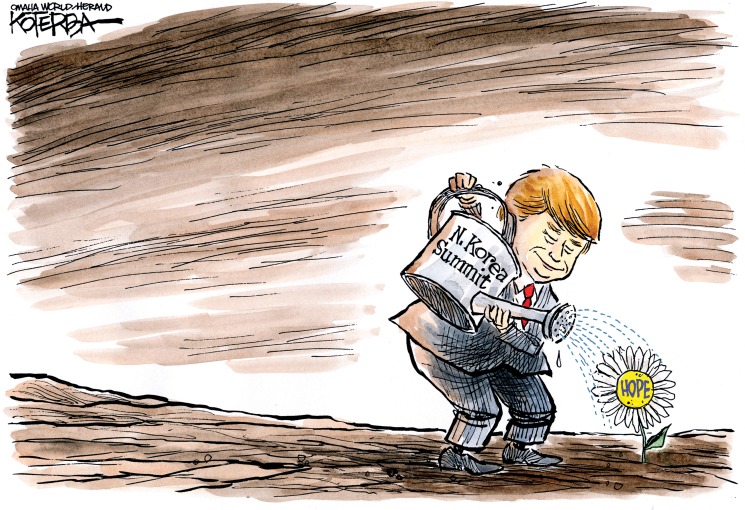 So Donald Trump has a date with Kim Jong Un in Singapore on June 12.

As long as the president doesn’t get arrested for chewing gum or hanged for spitting on the sidewalk, his meet-up with North Korea’s “Rocket Man” in that spotless city might actually become a historic summit.

Singapore 2018 might even become one of Trump’s legacies, though I suspect at this point he’s not as fixated on legacy building as most presidents.

He’s more focused on making a deal with a nasty communist regime that no previous president has been able to make.

We’ll know soon enough if Singapore is for show or for real.

Meanwhile, I hope when Mr. Trump sits down to negotiate with Kim Jong Un he’ll remember what happened when Ronald Reagan went to Reykjavik in October of 1986 to meet Mikhail Gorbachev.

My father’s meeting in Iceland with the General Secretary of the Communist Party of the Soviet Union was a “session” and not an official summit, but it was a huge, huge geopolitical deal at the time.

The hope was for the two superpowers to discuss ways to put limits on strategic nuclear weapons arsenals and to come up with a sweeping arms-control agreement that would bring about the major mothballing of their nukes and missiles.

I remember when my father’s administration was putting the Reykjavik trip together. It was his second meeting Gorbachev, and hopes were sky high for a historic agreement that would end the scariest part of the Cold War.

Everyone in the administration – including Nancy – was excited because they thought Reykjavik was going to be Ronald Reagan’s greatest legacy.

Everyone was pushing him – relentlessly – to make a deal with Gorbachev. Almost any deal.

But when Mr. Gorbachev said he wouldn’t sign the document unless the United States gave up the Strategic Defense Initiative – the proposed “Star Wars” ballistic missile defense system – my father said “Nyet.”

He got up and walked away from the table.

Everyone was shocked and concerned by what my father did, but the rest was history. The Soviet Union soon went bust. The Berlin Wall came down. The Cold War was over.

Saying no to the USSR when it wanted the United States to give up something was not an audible my father called on the spot. It was something he had been hoping to do for a long time.

I remember in 1976 at the Republican National Convention when he lost the nomination. I walked over to his hotel room and asked him, “Why in world would you even want to run for president?”

“Michael,” he said, “for too long I’ve watched presidents of the United States meet with Secretary Generals of the Soviet Union.

“Every time we sit sit down with them they’re asking us to give up something to get along with them.

“I want to be the first president who says ‘Nyet.’ That’s the reason I wanted to run for president.”

In order for President Trump’s meeting on June 12 to be a success, and he certainly has it in him to make it one, he also has to be willing to walk away.

You can’t make a deal just because you’re thinking it’s going to be good for your legacy.

Your legacy might be when you stand up and walk away from a bad deal.

The only way you’ll ever win real victories against the people who run hellholes like the USSR, North Korea and Iran is if you’re willing to walk – and they know it.

Anyone can make a bad deal – look at the one President Obama made with Iran.

So my suggestion to the president is, “Don’t make a deal with North Korea just to make a deal. Sometimes the best deal is to walk away.”

And anyway, Mr. Trump, with three American prisoners safely back home from North Korea, you’ve already got a win.