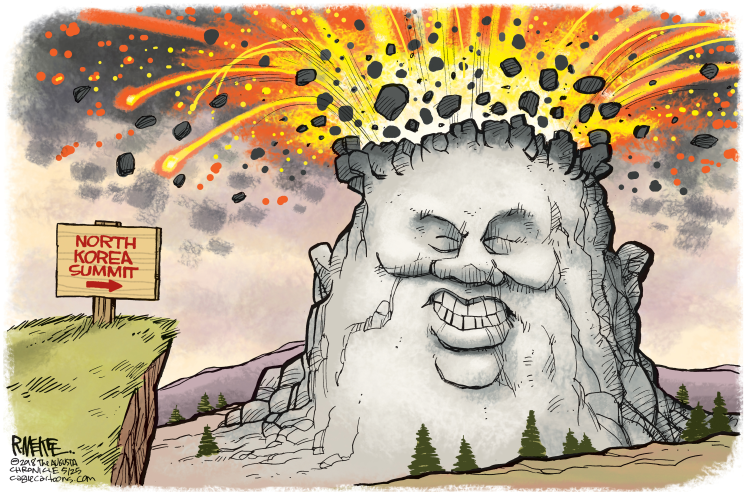 Don’t sweat the postponement of the Singapore Summit.

My bet is that it’s just one of many bumps, blips and stumbles that will happen before the Trump administration and that evil dictatorship agree to a historic deal.

Meanwhile, Donald Trump continues to get lots of positive things done in Washington.

This week he signed a bipartisan fix for the badly flawed Dodd-Frank financial reform act that helps small and regional banks deal with rules designed for Big Banks.

He also signed a smaller bill many say has been needed for a long time – “The Right to Try Bill,” which gives terminally ill patients the right to seek experimental drug treatments before they achieve final FDA approval.

By almost any measure, and despite virtually no help from Democrats and the biased mainstream liberal media, President Trump’s doing pretty well at home and abroad.

His tax cuts are still giving millions of middle-class people fatter paychecks, unemployment is at record low levels for blacks and Latinos, the Trump stock market is still up and the economy is getting stronger and healthier all the time.

Meanwhile, look at what the Pelosi-Clinton Democrats are doing.

They’re counting on winning the House of Representatives in the fall.

And what’s their big selling point to voters, the single-most important issue they think will inflame the masses, elect Democrats and return the Party of Hillary to power in Washington?

“Elect me. I promise to impeach President Trump.”

Oh, as a special bonus, if Nancy Pelosi returns as their speaker, she promises she’ll immediately roll back those crummy Trump income tax cuts.

A rational American voter might ask, “What exactly has President Trump done to deserve impeachment?”

“We don’t like him” isn’t anywhere in the Constitution.

Neither is “We don’t like the way he tweets or runs the White House.”

We all know the real reason Democrats want to impeach Donald Trump – he beat Hillary the Great and to do that he must have cheated.

Democrats can never believe it when they are beaten fair and square by a Republican presidential candidate.

The Impeachment Democrats better watch it.

If they take the House and try to impeach Trump on frivolous grounds, they won’t just make a mockery of the Constitution. They’ll also start a bad precedent that eventually will come back to bite them in the butt.

The next time their guy gets elected president and Republicans get control of the House, their guy will get impeached for something silly like golfing too much or smoking cigars in the Oval Office.

The November elections are going to be big trouble for the cocky Democrats, who still think Trump or his staff colluded with the Russians in 2016 to steal the election.

Democrats are already running “I hate Trump” campaigns around the USA.

But while Hillary Clinton is running around making excuses, wearing a Russian hat on stage and making dumb jokes, President Trump’s poll numbers are inching up and the generic Republican-Democrat ballots are even in the polls.

As usual, Democrats have 90 percent of the media on their side.

But Republicans own all the important issues ,’ lower taxes, better economy, more jobs, plus possible breakthroughs with the despots who run Iran and North Korea.

All the Democrats have in 2018 is,”We’re going to impeach Donald Trump. Then we’ll raise your taxes.”

They’ll look like fools if they run on that platform – they already do.