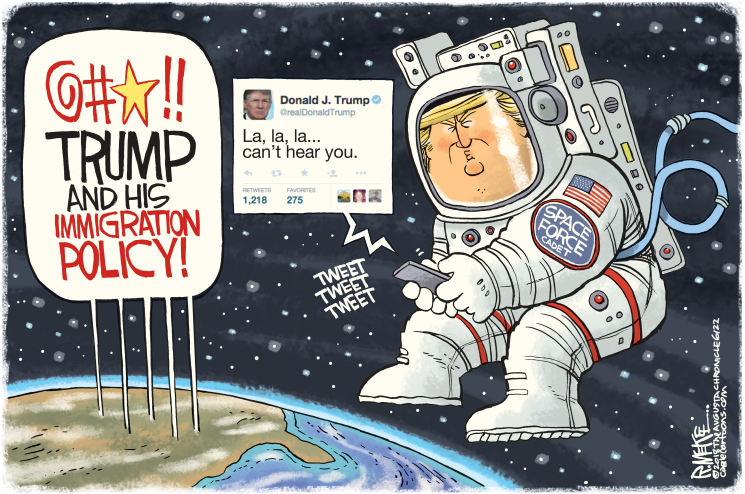 It’s no surprise that Democrats and everyone in the liberal media are blaming President Trump personally for the crying immigrant children at the border.

He gets blamed for everything their hysterical minds can think of.

But it’s not up to him to fix what’s wrong with our messed-up immigration policies. It’s up to Congress.

The problem is, as Americans can see for themselves every day, Congress is broken ,’ and crawling with spineless politicians.

Our senators and representatives can’t or won’t come up with an immigration reform bill and send it to the president’s desk any time soon – just like they couldn’t or wouldn’t do so when Bush II and Obama were presidents.

Both parties are at fault.

For more than thirty years, no matter which party controlled Congress or the White House, they did nothing significant to fix our illegal immigration problem – which now should be more accurately described as “an illegal invasion problem.”

House Republicans today can’t even get their act together to pass an immigration bill and send it to the Senate, where they’d never get it passed anyway.

Meanwhile, cynical Democrats prefer to continue using footage of crying children as propaganda weapons in their 24/7 war against Trump and anyone bearing his name.

When Melania Trump flew down to Texas this week to see firsthand how illegal immigrants and their children are being treated at the Mexican border, some creepy media people made fun of her.

But she deserved applause, not laughs. She did something I bet 95 percent of the members of Congress have never done.

She actually went to find out what madness our border security people have to deal with every day.

No one with a heart likes to see kids crying or suffering behind chain-link fences (except the anti-Trump media who weaponize the image).

But children of illegal immigrants caught at the border have been separated from their parents for years.

It happened while Obama was president, though the liberal media didn’t notice or get hysterical about it or his other strict, Trumpian policies.

Now everyone in the media is appalled because it’s occurring under Trump?

No one expects fairness or historical perspective from the liberal mainstream media when it comes to Trump. Like so many other issues, on this one the president was doomed no matter what he did.

When he told Congress that immigration was its job to fix, he was correct.

But Congress and the liberal media begged him: “Please, Mr. President. You can solve this tragic separation problem simply with your signature.”

He signed an executive order to cease his own administration’s practices and allow families (or alleged families) seeking asylum to be detained together until they were vetted or processed.

And what was his reward for his change of heart? People whined that it wasn’t enough or that it would make things worse.

Meanwhile, since spineless Congress isn’t going to touch immigration reform this year or in 2020 or maybe ever, what should we do?

There are no good or easy answers.

But if we really want to make sure kids and their parents from Honduras or Guatemala are kept together after we catch them trying to break into the United States, I’ve got a cheap and sensible idea we could try.

We should immediately put them on a nice bus and send them home. Actually, I stole the bus idea from Barack Obama.

In 2014 he told George Stephanopoulos on TV that he had a tough message for the families of Central America who were thinking of sneaking their kids into the USA: “Do not send your children to the borders. If they do make it, they’ll get sent back.”

Maybe President Trump should ask Obama if he has any other good advice.