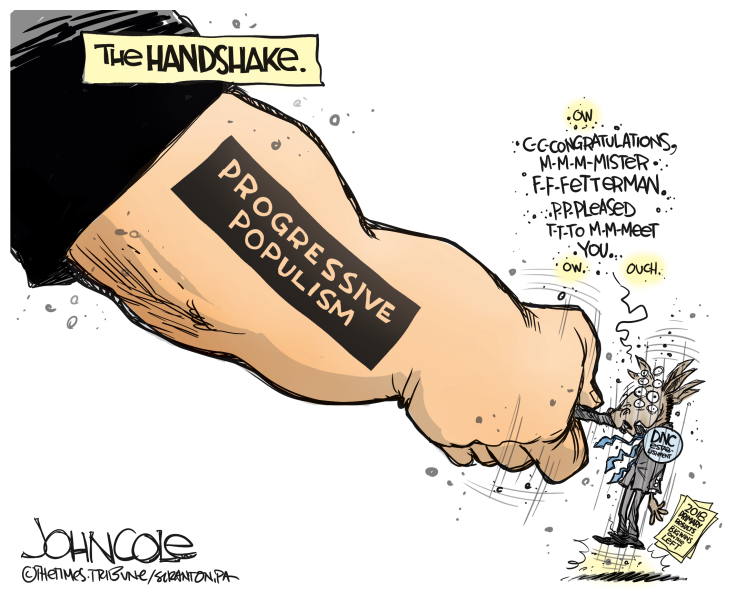 What a great July 4.

The skies over America the Beautiful were filled with fireworks, and the Twittersphere was filled with three Democratic senators blowing themselves up.

It was rough stuff from three lefties who think they’re going to be the next president and apparently think that tweeting like Trump is going to make their delusion come true.

Sen. Harris of California warned her followers that Trump is planning to nominate someone who’ll overturn Roe v. Wade because she’s certain he wants to punish women “for wanting to control their bodies, their lives, and their futures.”

Sen. Warren tweeted to her followers and fellow Native Americans that Trump’s short list of Supreme Court nominees “was hand-picked by right-wing extremists who want to criminalize abortions.”

And Sen. Gillibrand echoed socialist Bernie Sanders, hitting the president for strictly enforcing immigration laws that separated illegal immigrants from their children at the Mexican border.

The Democrats are in deep trouble and they know it. As Trump is only getting stronger, wilier and more popular, Democrats only get more desperate and stupid.

The mental state of the typical diehard Democrat or MSNBC host is now somewhere between terrified and my congresswoman Maxine Waters.

Somehow the bosses of the desperate Democrat Party have concluded that the only way they’re going to capture the House this fall and take the White House away from President Trump in 2020 is to out-Bernie Bernie.

Good luck with that plan in Texas, Florida and Pennsylvania, comrades.

But I’m a kinder and gentler Republican. I like to help the less fortunate when if I can.

I’d like to offer the Democratic leadership a free TV or radio spot to help them.

It’s not perfect, and it hasn’t been cleared yet by the Russians. But maybe they can use it in their fall media campaign.

“IF YOU WANT TO SEE TRUMP IMPEACHED, VOTE FOR US ON NOVEMBER 6.

“IF YOU WANT NANCY PELOSI IN CHARGE OF THE HOUSE AGAIN, VOTE FOR US.

“IF YOU WANT SOCIALISM FOR AMERICA LIKE THEY JUST VOTED FOR IN NEW YORK, VOTE FOR US.

“IF YOU WANT TO ELIMINATE BORDER PROTECTION, VOTE FOR US.

“IF YOU WANT A WEAK MILITARY, VOTE FOR US.

“IF YOU DON’T LIKE YOUR FEDERAL INCOME TAX CUT, VOTE FOR US.

“IF YOU WANT MORE ABORTIONS, VOTE FOR US.

“IF YOU WANT TO TURN THE USA INTO CALIFORNIA, VOTE FOR US.

“IF YOU DON’T LIKE AMERICA’S OIL AND GAS BOOM, VOTE FOR US.”

I’ll leave a dozen other easy examples for desperate Democrats to think up. It’ll be easy for them, now that they’ve dropped their masks and are showing us their true socialist faces.

Maybe they can get help from Alexandria Ocasio-Cortez, the socialist from the Bronx who knocked off 10-term incumbent House member Joe Crowley in a Democrat primary last week.

She’s only 28, but I hear some people think she’s the future of the Democratic Party.

If that’s true, that’s good news for Republicans. The only thing we’ll have to worry about now is who we should pick to succeed President Trump in 2024.