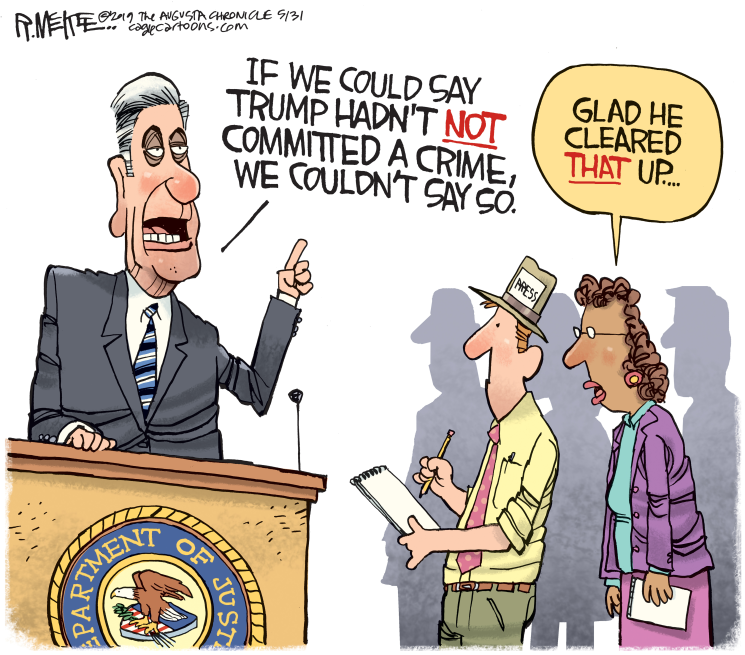 There was a big media buildup and a lot of wild guessing by the pundits on FOX and CNN about what Special Counsel Robert Mueller was going to say in his public statement on Wednesday.

But in the end, after Mueller's nearly 10-minute sum-up of his two-year, $40 million investigation into Russian election interference in the 2016 election, we were left with no bombshells, no smoking guns, no surprise twists - nothing new.

We heard nothing from Mueller we didn't already know, and he took no questions from reporters.

But because the language Mueller used this week was different from the language Attorney General William Barr used when he summarized the basic conclusions of the Mueller Report Barr in April, Mueller's statement gave a fresh jolt of energy and hope to the Deranged Democrats' dream of impeaching the president.

Everyone knows that if Mueller had found even a whiff of collusion with the Russians or the slightest hint of obstruction of justice by President Trump, he would have already made that charge - in BIG CAPITAL LETTERS - on page one of his 400-plus-page report.

Mueller didn't do that in April and he didn't do it Wednesday.

But that didn't stop most of the 23 Democrats running for president or the Trump Hate Media from slobbering all over Mueller's deviously worded and legally shifty statement.

The Democrats and CNN's embarrassingly unbalanced panels of Trump-hating journalists parsed every other word to "prove" that, see, Mueller thought Trump really was guilty of obstruction but he just couldn't charge him because he's a sitting president.

Now, thanks to what Mueller said and didn't say, the craziest Democrats in the House wanted to start impeaching the president yesterday morning. But Speaker of the House Nancy Pelosi knows nothing new was learned Wednesday that wasn't already in Mueller's report.

Pelosi may eventually be forced by her caucus to proceed with impeachment, but she knows that it would probably backfire politically on the Democrats in 2020 and that it is never going to happen anyway as long as Republicans rule the Senate.

Despite the liberal media's biased overreaction, Mueller's statement was another fizzled "blockbuster" in the "Russian Collision" fantasy that diehard Trump haters still think was real.

None of the Democrats running for president said anything about working on legislation to prevent Russian hackers from meddling in our elections again.

All they and their soulmates in the liberal media did was declare Mueller a great American patriot and climb on the "Impeach Trump Now" bandwagon.

Meanwhile, Vladimir Putin and his old KG--comrades in Moscow are still laughing their butts off about 2016.

They didn't spend much on Facebook ads. They didn't hack our election systems and change vote totals. And they didn't help Trump steal the White House from Hillary.

But their meddling has succeeded in disrupting the American political system far beyond Putin's wildest dreams.

And thanks to the sore-loser Democrats and the Trump-hating establishment media, both of which still refuse to believe Trump could have beaten Hillary without committing a crime or treason, Russia's interference is still succeeding.

Mueller made a big deal out of Russia's meddling in the 2016 election on Wednesday and stressed in his written report how deeply involved they were.

But you don't hear the Democrats in Congress and the liberal media talking about the importance of stopping the Russians from interfering in our elections.

All we're hearing is the "I" word - impeachment.

In the end, the deranged reaction to Mueller's statement by the Democrats in Congress and their soulmates in the media has made it clear - for the hundredth time - that they are much more interested in stopping Trump in 2020 than stopping the Russians.