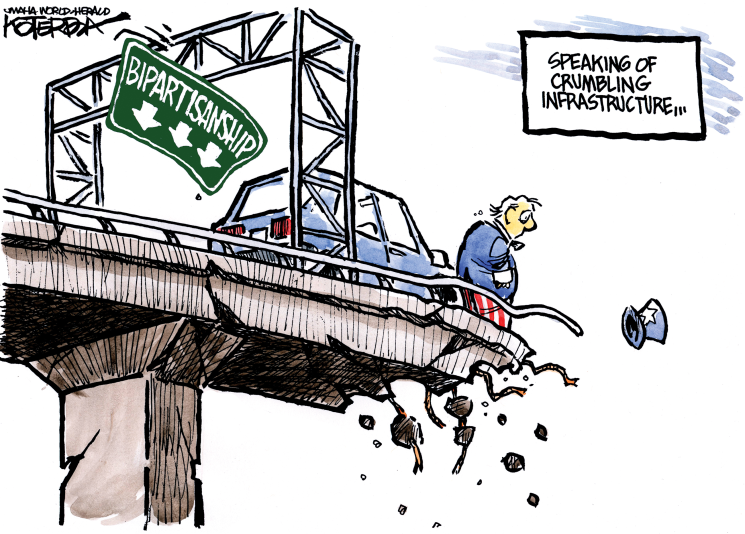 Earlier this week I traveled to central Illinois to speak at a memorial service at Eureka College, my dad's alma mater, on the 15th anniversary of his death.

As I flew halfway across the country and talked to many of the good people in the heart of America, it struck me how testy or peeved off everyone is about politics.

It seems like everyone's got a chip on their shoulder.

You can't just sit down at a table or a bar and have a simple conversation with a friend or a stranger because you're afraid of what might happen if you say the wrong thing.

If you say you're a Democrat, some Republican gets mad at you.

If you say you're a Republican who doesn't think Trump should be jailed immediately, someone else gets mad at you.

It's always a shame when Americans become so divided by partisan politics that they can't find anything uplifting or positive to say about their great country, but it was especially disappointing to me this week.

This was a week when all Americans should have been united in celebrating two of our historic victories in World War II and the brave young soldiers and sailors who made them possible.

Instead of bickering over partisan politics, we all should have been celebrating the Battle of Midway, the decisive naval battle we won against the Japanese between June 4 and June 7, 1942, that turned the tide of the war in the Pacific.

We also should have been celebrating - as President Trump did on his trip to France this week - the heroism of the Greatest Generation on D-Day, June 6, 1944, when our troops stormed the beaches at Normandy and turned the tide of war in Europe.

America had thousands of great heroes in the Pacific and in Europe during World War II, but we've done a terrible job of celebrating success stories like D-Day.

We've also done a lousy job of teaching our kids the extraordinary things we did to defeat the twin evils of fascism and communism.

I don't ever want to run into another 28-year-old American man - as I once did - who didn't know why there is a cemetery filled with thousands of American soldiers on the coast of France.

I also don't ever want to talk to another young American standing where the Berlin Wall once was and have him tell me that the United States put up the wall to keep the Communists out of their sector.

It's not just the history of World War II and the Cold War that young people aren't being properly taught about, though.

The success stories of many famous Americans are rarely celebrated for what they say about the values of our country and the opportunities that are open to everyone rich or poor.

For example, when I spoke at the memorial for my father at Eureka College, I said - as my father often pointed out - that he was proof that in America anyone can rise to the top.

He didn't go to Harvard, Yale or Stanford. He went to Eureka, a postage-stamp of a Christian college near Peoria, on a poor boy's scholarship because his family had no money.

Yet Ronald Reagan rose to be president of the U.S - and lots of graduates from elite schools like Harvard, Yale and Stanford had to look to the poor kid from Eureka College for affirmation.

My father's life showed that if you put your nose to the grindstone, anything is possible in America.

His success - like that of millions of other Americans - was proof of the basic greatness and goodness of our country.

Along with D-Day and Midway, his life was one of the many uplifting American life stories we could have been celebrating on TV this week.

Instead, what we saw was mostly a lot of arguing about whether to impeach the president or put him in prison.