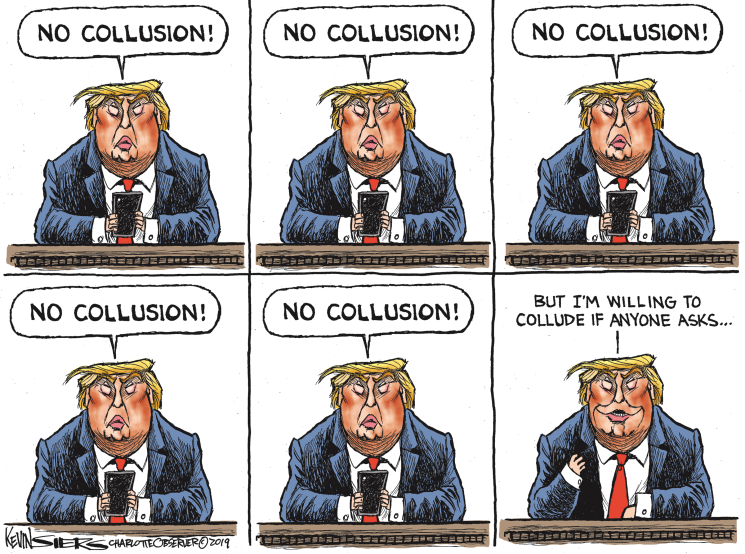 What the heck was President Trump doing?

What was he thinking when he told ABC's star fake journalist George Stephanopoulos on Wednesday that if a foreign adversary offered him dirt on a political opponent he'd take a look at it before calling the FBI.

That was an incredibly stupid thing to say. And all day Thursday in the media we heard a bipartisan chorus of everyone but his wife Melania saying exactly that.

But what was Trump even doing giving a professional Clinton apologist like Stephanopoulos unlimited access to him for two whole days?

Has he forgotten that his chief enemy is Fake News, Inc.?

And can't the president restrain his ego for a few days and let the news media focus on something else but him?

How about the total collapse of the Mueller Report, the impending investigation into the corrupt origins of the Russian Collusion Hoax, the southern border crisis or the latest bumblings of old Joe Biden?

For better or worse, Trump is still Trump - and always will be.

But that's no excuse. His statement was not just wrong, it was politically dumb.

What he said to Stephanopoulos didn't merely provide several days of fresh free ammo to the Democrats on the House committees who want to impeach him.

It also may have tested the loyalty of the 42 percent of MAGA Americans who so far have been willing to support him no matter what crazy thing he says or does.

In this case, most hard-core Trump supporters probably will say, "So what? Hillary Clinton didn't just accept Russian dirt on Trump during the 2016 election.

"She and her corrupt campaign actually paid someone to get fake dirt on Trump from Russia and put it in a dossier to give to her soulmates running the FBI."

Stephanopoulos and his liberal pals in the mainstream media conveniently forgot what Hillary's gang actually did with Russian dirt because they were so busy beating up Trump for what he said he might do if he were offered dirt on an opponent.

Imagine if President Obama or any other Democrat had made that statement to Stephanopoulos. Talk radio and the conservative media world would have gone nuts - justifiably.

Meanwhile, what's happening in Washington on important problems like health care reform and border security? Nothing - not even gridlock.

Republicans and Democrats in Congress can agree on just one thing, and we'll see what it is when they vote for it in a few days - a pay raise for themselves.

In our upside-down Trump World of Washington, Democrats and Republicans have flipped 180-degrees on issues like immigration and the national debt ceiling.

And remember how Republicans were always worrying about the soaring national debt, even before Obama nearly doubled it to $20 trillion?

Now, after Trump has added about $2 trillion more to the federal debt, all we hear from Republicans on the subject are crickets.

The only person left who consistently warns us about our rising national debt these days is William Devane in those Rosland Capital gold commercials on TV.

You'd think that after what happened in last fall's election you'd see some action in Congress on health care or immigration, but there's been nothing.

That's because it's been clear for more than three decades that Democrats and Republicans would rather have both issues as political weapons than come up with the bipartisan answers to fix them.

If they fix them, they lose the issue.