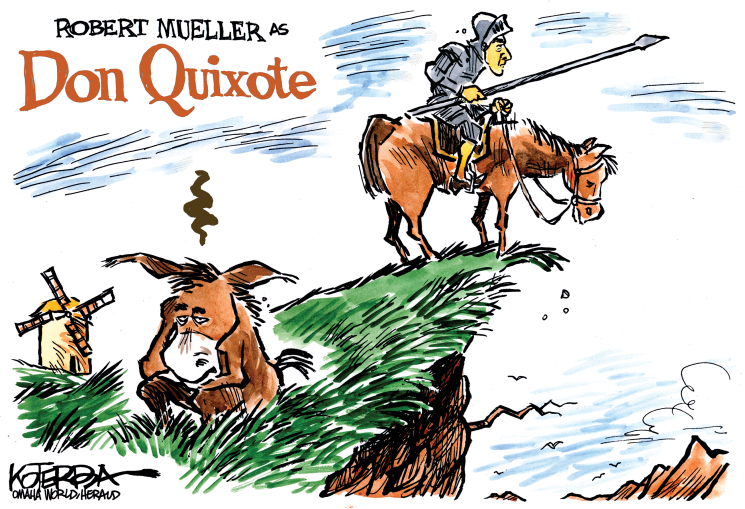 I just happened to be in Paris - France, not Texas, s'il vous plaC.t - on Wednesday when Robert Mueller made the Democrats cry and put the country to sleep with appearances at two congressional hearings.

I saw only a few TV snippets of the poor ex-special counsel looking frail and confused about what was or was not in his report, which Mueller apparently didn't write or even read very carefully before he put his name on it.

How boring was it, America?

During seven hours of dull, slow, partisan grilling by House Democrats and Republicans, Mueller apparently uttered "It's not in my purview" and "I'm not going to speak to that" about 200 times.

How much did it benefit the Democrats' Trump Impeachment Industrial Complex?

Well, Chuck Todd, Michael Moore and Donald Trump pretty much had the same reaction - it didn't move the needle on impeachment, didn't reveal anything new and didn't help the Democrats.

Mueller was always supposed to be the Democrats' superhero who was going to slay the evil Trump Monster.

He and his crack team of brave Trump-hating prosecutors were going to dig up the dirt that would pave a smooth road to impeachment for House Democrats.

The Mueller Report turned out to be a badly over-cooked $25 million nothing burger that proved there was no Trump-Russia collusion - or anything else that was impeachable.

That conclusion cruelly disappointed every Trump hater, especially the professionals at CNN and MSNBC, who have been parsing the report's 400-plus pages ever since May in their desperate attempt to find high presidential crimes and misdemeanors in the footnotes.

The House Democrats' grand plan was for the in-person Mueller to become the legal and moral prop who would dramatically bring his mostly unread and unreadable report to life for the American people.

His televised testimony was going to be carefully edited and turned into 2020 campaign ads and Trump-damning sound bites that CNN, ABC and the sad sacks at "Morning Joe" could run in a loop until next fall.

But Mueller's testimony on Wednesday created another nothing burger - a double-decker.

He did such an obviously poor and indecisive job that most people pretty much agreed that the "Robert Mueller Show" was devastating for the Democrats.

Mueller dodged all the hard questions Republicans asked, including why he hired so many pro-Hillary prosecutors and who actually wrote the report (not him).

Inexplicably, like the hate-blinded House Democrats and every Democrat running for president, Rachel Maddow and Nicole Simpson at MSNBC thought Mueller did a swell job.

Most Republicans and fair-minded journalists did not agree.

They called out Mueller's sad on-camera performance for being what former Republican congressman Trey Gowdy said it was - an unmitigated human train wreck.

It was an unnecessary personal embarrassment for an older guy that deranged Democrats made him suffer because it served their foolish mission to impeach Trump.

Mueller was also a political disaster for the Democrats and made impeachment by the House even less likely.

His bumbling appearance backfired badly on House Democrats, who've wasted 2 1/2 years going after Trump when they should be working on legislation to fix immigration, health care and the infrastructure.

It only helped the president and Republicans for 2020, which Trump knew immediately as he watched and tweeted.

I'm just glad I was on a vacation with my wife in France and didn't have to watch.