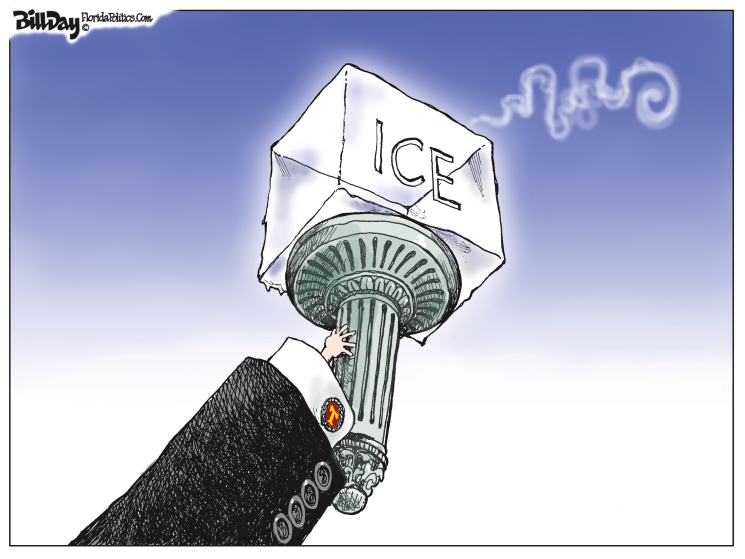 Independence Day used to be a happy day when all Americans put aside their partisan differences and came together to celebrate the miraculous birth of the United States of America.

But like almost everything in the upside-down era of President Donald Trump, our great Fourth of July holiday has been spoiled by ugly politics.

Whether it's Nike deciding not to sell a running shoe with a Betsy Ross flag on its heel because a leftist ex-pro football player was offended, orPresident Trump being charged with militarizing the July 4th parade in Washington, Independence Day has become another thing to fight about for a few days on cable TV and in social media.

Immigration is still by far the country's most divisive issue now.

My father loved and understood immigrants, but with the way things have deteriorated in Washington, I don't know if he would have many allies on either side of the immigration battle today.

This Fourth of July weekend is a good time to listen again to the uplifting things he said about immigrants and America in 1989 during his last speech at the White House:

" ... I think it's fitting to leave one final thought, an observation about a country which I love. It was stated best in a letter I received not long ago.

"Yes," my father continued, "the torch of Lady Liberty symbolizes our freedom and represents our heritage, the compact with our parents, our grandparents, and our ancestors. It is that lady who gives us our great and special place in the world.

"For it's the great life force of each generation of new Americans that guarantees that America's triumph shall continue unsurpassed into the next century and beyond. Other countries may seek to compete with us; but in one vital area, as a beacon of freedom and opportunity that draws the people of the world, no country on Earth comes close.

"This, I believe, is one of the most important sources of America's greatness. We lead the world because, unique among nations, we draw our people -- our strength -- from every country and every corner of the world. And by doing so we continuously renew and enrich our nation.

"While other countries cling to the stale past, here in America we breathe life into dreams. We create the future, and the world follows us into tomorrow. Thanks to each wave of new arrivals to this land of opportunity, we're a nation forever young, forever bursting with energy and new ideas, and always on the cutting edge, always leading the world to the next frontier.

"This quality is vital to our future as a nation. If we ever closed the door to new Americans, our leadership in the world would soon be lost."

My father then told a story to remind his audience that "the magical, intoxicating power of America" was so strong it could make even a German POW imprisoned in the United States "fall in love with us."

"Those who become American citizens love this country even more," he said. "And that's why the Statue of Liberty lifts her lamp to welcome them to the golden door.

"It is bold men and women, yearning for freedom and opportunity, who leave their homelands and come to a new country to start their lives over. They believe in the American dream. And over and over, they make it come true for themselves, for their children, and for others. They give more than they receive. They labor and succeed. And often they are entrepreneurs.

"But their greatest contribution is more than economic, because they understand in a special way how glorious it is to be an American. They renew our pride and gratitude in the United States of America, the greatest, freest nation in the world -- the last, best hope of man on Earth."