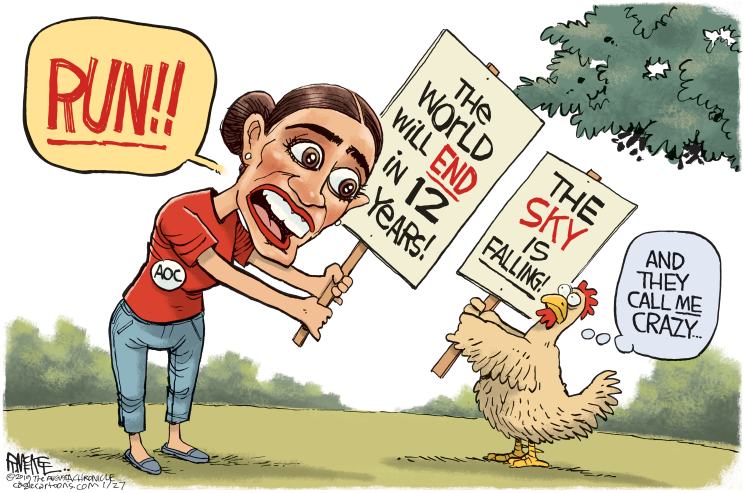 It’s too bad for America that CNN’s seven-hour town hall on climate change was such a rating disaster.

If twenty times as many viewers had tuned in Wednesday night, about 22 million Americans today would have a real clear idea what a bunch of leftwing nut-jobs are running in the Democrat presidential primary.

Bernie, Liz, Kamala, Cory and the others took turns trying to out-do each other with their scary visions of the coming environmental apocalypse and their heroic trillion-dollar plans to use the Green New Deal to save the planet.

Poor Joe Biden did his best to keep up, but he couldn’t out-blather the youngsters and ended up only making news by blowing out a blood vessel in his eye.

I couldn’t watch much of it myself, because I prefer reality TV to science fiction.

But here are a few of my takeaways:

Angry Bernie Sanders, the No. 3 socialist in the polls, thinks if you’re truly serious about fighting global climate change, you shouldn’t have kids.

Strident Elizabeth Warren, the No. 2 socialist in the polls and a former Native American, thinks that if her new environmental laws wipe out the main business in their hometown, should just go out and find a new job.

Goofy Kamala Harris, the No. 4 socialist in the polls, cackled like the Wicked Witch of the West from “The Wizard of Oz” when she answered, yes, she’d outlaw plastic strawsand fracking if she became president.

Banning plastic straws has become one of the Democrat Party’s most important imaginary platform planks, along with making our southern border as porous as possible and outlawing the use of fossil fuels, the eating of cows and the shooting of guns.

Democrats know that they have as much chance of achieving those goals as CNN does of becoming a trusted source of news again.

Warren, Harris, Cory and lesser Dems like Pete and Beto have no idea what they really want to do about reducing global climate change.

If it’s not all crazy BS, it’s all gloom and doom and climate hysteria.

They have no realistic solutions for powering our economy without wrecking it.

Would they support getting more of the energy we’ll need for our electric cars from nuclear power plants, like their socialist brothers in Europe do?

So what are these future leaders of the world actually in favor of ,’ besides paper straws?

If we just get rid of those evil plastic straws, airplanes, cheeseburgers and, I guess, babies, we’ll all be better off.

The Dems running for president have no trust in technology, innovation and human brain power to solve our present and future social and economic problems, just as they’ve solved much more difficult ones in the past.

They just play to their dimwitted choir and sing their socialist hymns.

If we don’t implement their foolish Green New Deal, they claim, we’re all going to die from global warming in 12 years – make that about 11 and a half years now.

What the Democrats are basically saying is that to save the planet from man-made climate change, we have to have government control how we live, what we eat and how we travel.