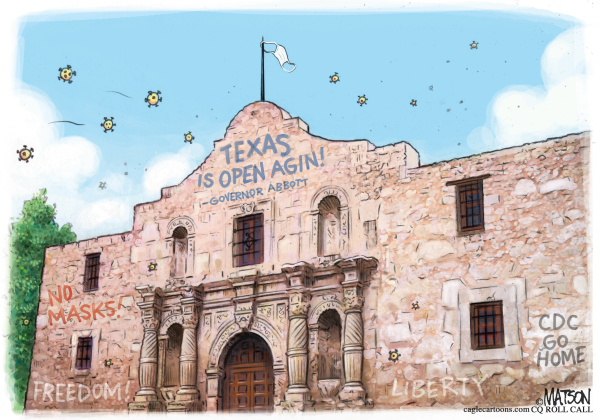 He wasn't the first governor in the country to lift the mask mandate for his state.

North Dakota, Montana and Iowa have ended state-wide mask orders in recent weeks and progressive states like Florida and South Dakota never issued them in the first place.

But Gov. Greg Abbott did the country a huge favor this week when he announced that Texas was allowing all businesses in the state to reopen at full capacity on March 10.

It was a loud and bold signal to the whole country that it's time to climb out of our basements, regain our freedoms and get back to "normal," whatever that's going to be.

The national media scolded Abbott for dropping the mask mandate and acted like he was a reckless mass murderer, of course.

Public health experts - who never fail to see a new surge of virus cases over the horizon - warned that it was too dangerous now to loosen up mask rules.

And President Biden, our pessimist-in-chief who sees no return to normal life by Christmas, accused Abbott of "Neanderthal Thinking."

But Abbott decided that his Texans had suffered enough. The economic, social and public health costs of lockdowns and school closings were too high to continue.

Suicides and drug overdoses are up in Abbott's state and across the country because of loneliness and the stress of lost jobs and lost businesses.

Young people across the country are depressed because they can't be in school with their friends - or even play sports. And dating? That's been virtually impossible for a year.

Meanwhile, the liberal national media who beat up on Abbott this week continue to fail the country every chance they get.

Despite the rapid introduction of the vaccine, the approach of herd immunity and the steep decline in positive COVID-19 tests, deaths and hospitalizations since Christmas, the media still applaud strict government mandates and continue to push panic and negativity.

What they should be doing instead is calling out the autocratic Blue State governors who look for any excuse to hold on to the emergency lockdown powers they've used to destroy thousands of small businesses and keep schools and sports venues closed for a year.

It's an outrage how much petty tyranny governors like Gavin Newsom of California have gotten away with in the name of protecting public health.

It wasn't until Newsom was threatened with a recall election that he backed off his strict edicts and began allowing 40 million Californians out of their basements.

Now he says there will be full attendance at the Dodgers home opener. What a difference 1.8 million signatures on a recall petition make.

If the liberal media had a shred of honesty, they should spend every day shaming the teacher unions for refusing to go back to work and denying the science that says the virus poses virtually no risk to them.

They also should be exposing the unreliable advice we've gotten for a year from the great Dr. Fauci, who's now saying that even with the vaccine our economic and social lives may not return to normal until next March.

When March rolls around, you can bet he'll have several bogus reasons why we should stretch the lockdowns and mask mandates through the 2022 elections.

The Democrats in Washington that Fauci serves so well want to continue to use COVID-19 to scare the country into accepting universal mail-in voting and giving them even more federal power.

For them it's always about getting more power in DC and they don't even try to hide the fact that they're using the current crisis as a way to take it away from the states.

Gov. Abbott's declaration of freedom for Texans came a little late. He made it about half a year after Gov. Ron DeSantis defied the lockdown lobby and freed up the people of Florida.

But Abbott got it right - and he set an example dozens of his fellow governors should follow ASAP.

Copyright 2021 Michael Reagan. Michael Reagan is the son of President Ronald Reagan, a political consultant, and the author of "Lessons My Father Taught Me: The Strength, Integrity, and Faith of Ronald Reagan." He is the founder of the email service reagan.com and president of The Reagan Legacy Foundation. Visit his websites at www.reagan.com and www.michaelereagan.com. Send comments to [email protected] Follow @reaganworld on Twitter.

by Joe Guzzardi
Under the guise of the "This is not who we are. America is better than this" language spoken by our current president, no accommodation is too generous for Northern Triangle migrants. To gauge how much taxpayers are required to tolerate while un ...
Jim Crow on Steroids? Come on, Man!

by Michael Reagan
Will someone please lend President Biden a history book? He thinks Georgia's new voting integrity law is "Jim Crow on steroids. " And Georgia's pretend ex-governor Stacey Abrams says it's "Jim Crow redux in a suit and tie. " Really? Come on,.. ...