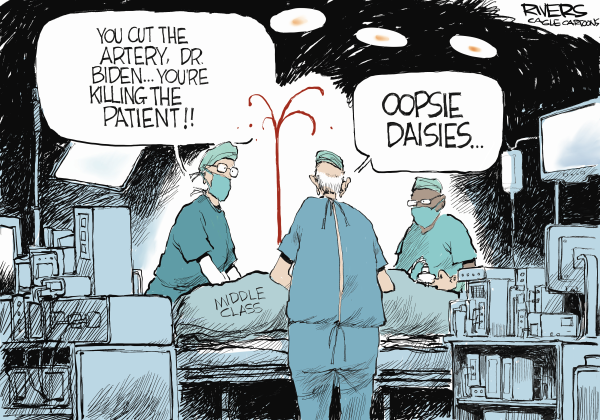 It’s not until you leave the United States that you realize how angry Americans are.

Earlier this month my wife the travel agent and I took a cruise in the Mediterranean from Athens to Barcelona by way of stops on the Greek island of Santorini and in Sicily.

It was the first trip Colleen has been able to book since February 2020, right before the global pandemic lockdowns sank 80 percent of the cruise ship industry and put her out of a job.

For me, who got to tag along, it was the best kind of get-away vacation, mainly because I saw and heard virtually nothing about American politics.

I never turned on the TV in my room, so I was never up to date on the status of the Democrats’ zillion-dollar spending packages or the latest wave of illegal immigrants flooding our southern border.

The global pandemic and its precautions and annoyances traveled onboard with us, of course.

We had to be vaccinated and wear masks when we were not eating, drinking or sunning by the pool.

Plus, we were tested for COVID on our trip four times before we got on the plane to Athens, twice on the cruise ship and before we flew home.

The strict COVID-19 policies were the small price we had to pay to escape Joe Biden’s “Angry America,” where it seems everyone is always griping and bitching about what’s going on – as I admit I do.

My vacation was a great way to hang out with friendly, happy people from around the world who weren’t angry all the time or never shut up about politics.

Best of all, it got me away from the TV and made me forget the political troubles in America.

I was so out of America’s news loop, I had no idea that angry parents across the country who’ve been protesting the actions of their liberal school boards had been branded by Biden people as “domestic terrorists” worthy of the FBI’s attention.

As soon as we arrived back in the U.S. earlier this week, I saw that Americans were as angry as ever – and had some new good reasons to be.

The Biden administration was talking about using the IRS to monitor the bank accounts of every American who makes a transaction of $600 or more.

Nancy Pelosi said something about it being part of a campaign to make sure every taxpayer, including the rich, pays their fair share, but that’s a ridiculous excuse for a dangerous federal power grab.

Everything the Biden administration has come up with so far is just as idiotic as that idea:

Its perverse energy policies, its harmful immigration policies, its proposed tax hikes, its covid vaccine mandates for larger companies, its bloated spending bills, its inflationary monetary policies … And let’s not forget the fiasco in Kabul.

Liberal Democrats used to get their kicks by making fun of the values and life styles of Americans in Red States. Now they’re using the power of the federal government to torture them in new ways and make them mad.

While we were vacationing, Gov. Gavin Newsom got in on the act.

He signed a new California law banning the sale of gas-powered lawn mowers, leaf blowers and other small equipment. Those tools – used by thousands of landscape workers – will have to become battery-powered only.

It’s really sad to watch the damage Biden, Newsom and company are doing with their leftwing ideas, stupidity and arrogance.

The only thing that will save the country is when the voters they’ve made so angry return the House and Senate to Republican control in the 2022 mid-term elections.

Meanwhile, Colleen and I are already thinking of going on another cruise tomorrow.