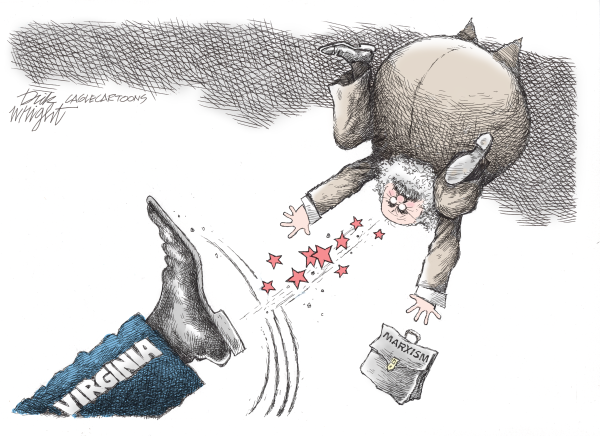 Well, what do you know.

He shut the hell up, encouraged his supporters to flood the polls and stayed away from Virginia.

By keeping his powerful big political butt out of this week’s elections in Virginia, the ex-president actually made a huge and positive contribution to the devastating losses Democrats suffered there on Tuesday night.

Trump’s absence turned out to be a key for the Republican Party’s shocking success.

Instead of showing up and making Virginia’s elections about himself, stealing all the media attention or rehashing how the 2020 election was stolen from him, Trump stayed home and allowed Glenn Youngkin to win by running his own brilliant campaign.

Youngkin, who did surprisingly well among Latino males and suburban soccer moms, was able to deftly thread the needle and hold on to hardcore Trump voters without scaring off independents.

He and his diverse statewide Republican running mates – a Latino attorney general and the Virginia’s first black woman lieutenant governor, ex-Marine Winsome Sears – won because they were able to hammer away on burning local issues that mattered most to voters.

They were able to focus on the teaching of racist theories in public schools. And they were able to look forward, and talk about the future, not the past, which is how you win most elections.

People have been calling me a Never Trumper on Twitter because I’ve argued that it’s fine for Trump to intensely involve himself in Republican state primaries but that he should stay away from general elections in the fall.

Virginia’s results, thank you very much, proved my argument is sound.

It’s been obvious for a long time that in important general elections – for instance, Georgia’s special Senate races last December that gave Democrats control of the Senate -- Trump’s personal and political “charms” can suppress the Republican vote turnout and hurt the GOP’s chances.

He can cause some squeamish old-school conservative Republicans to stay home on Election Day.

And his presence can turn off many independents and moderate Democrats who’ve come to their senses about the threat the progressives in Congress pose to America.

Trump is famous for not taking advice or giving bad advice.

But by shutting up his mouth, stifling his ego and not visiting Virginia he finally did exactly what I’ve been telling him to do for a year in my tweets and columns.

Maybe he’s been reading my columns. Where do I send the bill, Donald?

To paraphrase what my father liked to say, “It’s not about who gets the credit, it’s about getting the job done.”

And what happened in Virginia this week shows what local Republicans can get done when the party’s Mr. Crazy has the good sense to shut up and stay home.