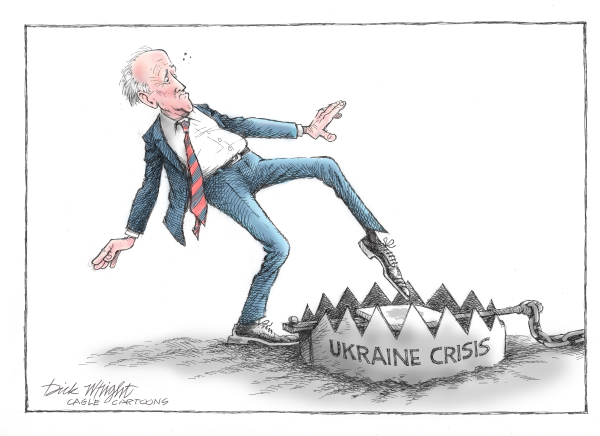 The good news is I’m feeling a lot better than I did on Sunday.

The bad news is that despite being vaxxed a year ago and boosted about ten days ago, I’ve come down with COVID.

I, my wife Colleen and my son, his wife and one of their young kids have just caught the omicron variant – or it’s caught us.

I guess you could say we’re on the COVID family plan.

To say the least, it’s been a real kick in the butt.

For almost two years my wife and I listened to the “science” and the people in charge and did everything you’re supposed to do to protect yourself and prevent the virus from spreading to others.

But it turns out it doesn’t matter whether you’re vaccinated or unvaccinated, masked or unmasked, the virus is a virus and one of its variants eventually is going to get you.

I’m not worried though. I heard Dr. Fauci say we’ll have a vaccine for omicron by March.

Meanwhile, from my couch I see that President Biden is in a serious squabble with Vladimir Putin over his threat to invade Ukraine.

The Biden-Putin “showdown” reminds me of a talk I had with my father the night he lost the Republican nomination to Gerald Ford.

Alone together in a hotel room, I asked, “Why in the world would you even want to run for the presidency of the United States?”

“You know, Michael,” he said, “for so long I’ve watched American presidents sit down with secretary-generals of the Soviet Union and watched them ask us to give up something to get along with them.

“I want to be the first president to say ‘Nyet’ to a Secretary-General of the Soviet Union.”

Then in 1986 — ten years after he told me that story – he was called to Reykjavík by Mikhail Gorbachev to sign a nuclear weapons agreement.

My dad arrived in Iceland and Gorbachev said to him, “I’m only going to sign if you give up the Strategic Defense Initiative” (aka, “Star Wars,” the outer space-based missile defense system then in early development).

Most everyone in my dad’s cabinet thought that signing the treaty would be Ronald Reagan’s greatest legacy and they wanted him to do what Gorbachev wanted.

But Ronald Reagan was not thinking of his legacy. He was thinking of America and freedom.

He knew that if he signed on to that deal and gave up the Strategic Defense Initiative, it wouldn’t make America and the world safer and freer.

So he said “Nyet” and turned and walked away from the summit – as I knew he would.

My father stood strong and did the right thing in 1986 and a year later he and Gorbachev had their historic weapons agreement that began the end of the Cold War.

We now have a weak president who wants to get along with the Russians and Putin knows it.

What Biden needs to do is make it crystal clear to Putin that although he paid no price for his annexation of Crimea in 2014, he’ll pay dearly if he invades Ukraine.

That means major economic and financial sanctions and energy policies designed to do what my father did to the old USSR – bankrupt Putin’s Russia.

The rest of the world is watching to see how Biden and the United States respond to Putin’s tank rattling at Ukraine’s border.

If Biden shows a backbone and puts Putin in his place, it may turn out to be the big foreign policy decision of his administration – his “Missiles of October” moment.

Mr. President, the whole world – especially its dictators and terrorist thugs -- is watching to see if you can say “Nyet.”