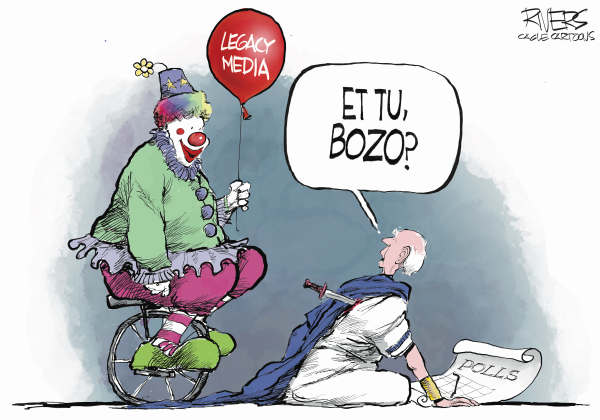 At his press conference this week he was the same old strange guy with the same old predictable excuses for one of the most hapless rookie presidential years in history.

I knew they’d ask a bunch of friendly questions about issues most of the American people don’t care about – and they did.

Who did disappoint me at this week’s endless Q&A session with the cognitively challenged leader of the Free World, however, were the conservative reporters from Fox News and Newsmax.

Normally, you can count on Peter Doocy of Fox News and James Rosen of Newsmax to play a little hardball – to ask Biden the tough questions.

We know the liberal reporters in the White House pool will never grill Biden on any of the ongoing national disasters he’s created or made worse – soaring inflation, a permanent invasion of illegal immigrants at our Southern border and the crime wave sweeping our cities come to mind.

So what tough question did Doocy ask Biden?

“Why are you trying so hard in your first year to pull the country so far to the left?”

That softball produced a chuckle from Biden, who then rattled off some bogus middle of-the-road accomplishments for working-class people that was supposed to prove he was not a Bernie Sanders socialist but a mainstream Democrat.

That was it for Doocy. That was his one and only chance.

Unlike many other reporters, he got no follow-up question, so as far as conservatives are concerned, he might as well have been working for CNN.

As for Newsmax’s Rosen, he asked Biden “why do you suppose such large segments of the American electorate have come to harbor such profound concerns about your cognitive fitness.”

"I have no idea," said the president who quickly moved on to take more softballs, which he answered with pat answers that were clearly written down for him.

Biden didn’t apologize for the blunder in Afghanistan or $4 gasoline or any of his other fiascoes or mistakes.

He took responsibility for nothing, said everything was peachy and everyone would be better off if Republicans in the Senate would only pass his gigantic spending bills.

The only real news he made was when he said that a small incursion into Ukraine by Russia might be OK and that the 2022 midterms “could easily be illegitimate” because Republicans were blocking federal election reforms.

Both gaffes were walked back by Biden’s keepers about 30 seconds after he left the podium.

Biden’s rare press conference was an embarrassment for him. It was too long, too sad and too boring for most people to watch. It would have been much better if a real journalist had asked Biden one of these questions:

Mr. President, nearly a million Americans have died from covid in two years. Do you still have confidence in the vaccine, Dr. Fauci and the CDC to get the virus under control?

Mr. President, you keep saying it’s a pandemic of the unvaxxed and that they are predominantly Republicans and Trump supporters. How can you say that when Blacks and Latinos are the least vaccinated ethnic groups?

This week the British government said because the threat of the omicron variant was rapidly diminishing it was ending all mask mandates and vaccine passports. Will America follow suit?

Mr. President, what do you think about the crime wave in the country and what will you ask the Department of Justice to do to help cities fight it?

Mr. President, inflation is soaring. High gas and food prices are hurting the poor and middle class. The supply chain is clogged up. Many grocery shelves are empty. Some say your policies are responsible. What do you say?

But at the end of the day, these and a dozen other hardball questions were never asked.

Even Doocy and Rosen played a game of softball with the president on Wednesday afternoon – T-ball, really. And like their liberal colleagues, they struck out.