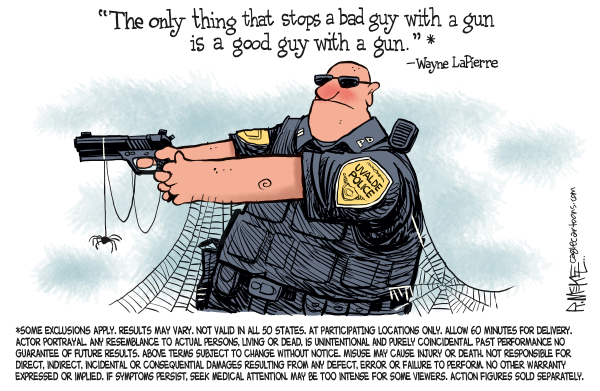 Why is it that whenever we dig into the details of a mass shooting we wind up finding nothing but screw ups?

At the Robb Elementary School in Uvalde, Texas, we learned that police responded within minutes but then stood around for almost an hour in the hallway while the shooter was barricaded in a classroom and still killing children.

We learned that there was no armed security guard stationed at the Robb school that day and that a door to the outside – which the shooter used to enter the building – did not lock automatically as it should have.

We also learned that the 18-year-old killer, as is so often the case, was known by his family, the authorities and his schoolmates to be a mentally unstable and scary gun nut, yet no one “red-flagged” him as a potential threat to himself or others.

And how many times have we heard stories about how the parents of future mass murderers continued to let them have access to guns even after it had become obvious to them that their children were dangerously disturbed?

It’s not that hard to protect a school from being invaded by a mass murderer – if we have the will.

Just as we do at airports, rock concerts and Super Bowls, we can use high fences, gates and automatically locking doors (that work).

We can also hire full-time security guards who are well armed, well trained and not afraid to shoot anyone dead who shows up at a school and tries to kill people.

A school guard without a gun is just a spectator at a slaughter -- or another victim.

But Democrats and the liberal media are so mindlessly in favor of stricter and stricter gun control that they’ll never understand that the best way to prevent a tragedy like the one in Uvalde is more guns – guns in the right hands.

Following the massacre in Texas, the anti-gun nuts again instantly proved how little they know about “the weapons of war” they desperately want to take away from us law-abiding citizens.

I don’t think three Democrats in Congress could define what an assault weapon actually is, much less explain the difference between a semi-automatic AR-15, a high-powered deer rifle and an Uzi.

And this week we heard President Biden babbling on about the difference in stopping power between a 9mm handgun – the most commonly produced pistol in the U.S. – and a .22 pistol.

Biden said he wants to ban high-caliber 9mm handguns like Glocks, which are used by most police forces and the security guards who protect him 24/7, because he thinks no one needs a gun for protection that is so powerful it “can blow the lung out of a body.”

Just to let him know, it was a .22 that almost killed my dad.

Many assassins use a .22 because when the smaller bullet enters your body it bounces off your bones like a ping pong ball and causes greater internal damage.

No one expects Biden to know what he’s talking about when he talks about guns, and the dishonest major media are too much on the gun-control team to discuss other sensible, doable ways of preventing future school shootings.

Putting well-armed security guards in our schools is extremely important, obviously, but it is parents who are the first line of defense.

If you realize your kid is out of control and truly dangerous, take their guns away. Give them to a neighbor. Lock them in a safe.

And please don’t wait for the government, the school principal or anyone else to red flag your child as a threat to themselves or others.

Do the right thing. Throw the red flag yourself.