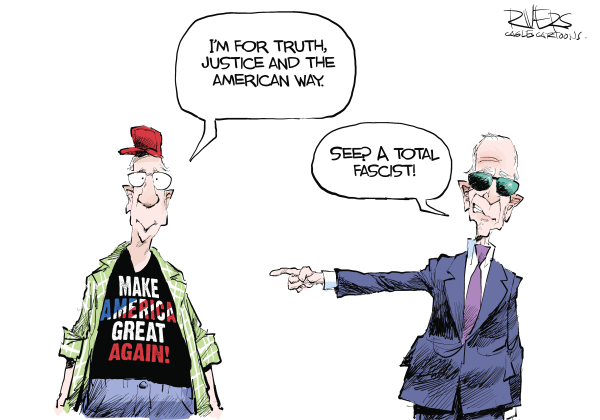 How much does President Biden dislike America? Let us count the ways.

Last week, our phony uniter-in-chief called about half of the country – Republicans and all red-hatted supporters of Donald Trump – semi-fascists.

His press secretary – the person who has the impossible job of trying to clarify, excuse or walk-back Biden’s daily gaffes and deranged attacks on his fellow Americans – said later that the president was not exaggerating by using the political f-word.

“When you look at the definition of fascism,” she said at a press conference without knowing what fascism is, “and you think about what [Republicans] are doing in attacking our democracy, what they’re doing in taking away our freedoms, wanting to take away our rights, that is what that is.”

Everyone knows Trump was just another Hitler and the millions of “Make America Great Again” Republicans who voted for him are "a threat to our democracy."

As part of his national road tour to drum up support for Democrats in the midterm elections, he laid out his long overdue federal plan to address the national crime wave – you know, the one created by “progressive” Democrats who’ve spent the last few years defunding or decimating police departments in cities across the country.

This time Biden took a cheap pot shot at the millions of Americans (from both parties, by the way) who defend the Second Amendment because they believe – as the Founding Fathers did – that a well-armed populace is crucial to keeping our own government in line.

Biden mocked so-called “right-wingers” who are fighting against his proposal to place a federal ban on guns that look like “weapons of war” but aren’t – specifically, the very popular semi-automatic AR-15 rifle.

“And for those brave rightwing Americans who say, ‘It’s all about keeping America … independent and safe, if you want to fight against the country, you need an F-15, you need something a little more than a gun.”

Hardly anything Biden says – or reads – makes sense. But an F-15? The tactical fighter jet? Is that what we’d need to fight back against a despotic American government?

People ask what’s wrong with America. The answer is, "Lots."

In this case, Biden was basically threatening the American people, saying, “Go ahead, try to take your government back. We’ve got bigger guns than you. We’ve got F-15s.”

Republicans railed against his F-15 statement, which is similar to ones Biden has made before in his mindless crusade against gun rights.

Democrats and the liberal media applauded on cue, of course. They really believe the myth that half the country – the Red half they fly over in their private jets – are evil insurrectionists who’d sack Washington and level it with artillery next weekend if they could.

President Biden is not just out of it, he’s scary. He and his anti-gun allies are spooking so many Americans into buying weapons it's almost impossible to find one to buy – leagally.

I don’t need any new guns. I’ve got mine – and I like to shoot them.

Sept. 1 was the opening day of dove season and for nearly 30 years I’ve gone on these shooting trips at this time of year with my family and friends.

I eat what I shoot and did not graduate from the Dick Cheney School of Bird Shooting.

And in case someone is reading this column to the president, he should know that I brought along my Model 870 Remington 12-gauge shotgun, which he so kindly says I’m allowed to use to protect my home. But please tell him I left my F-15 at home in the garage.