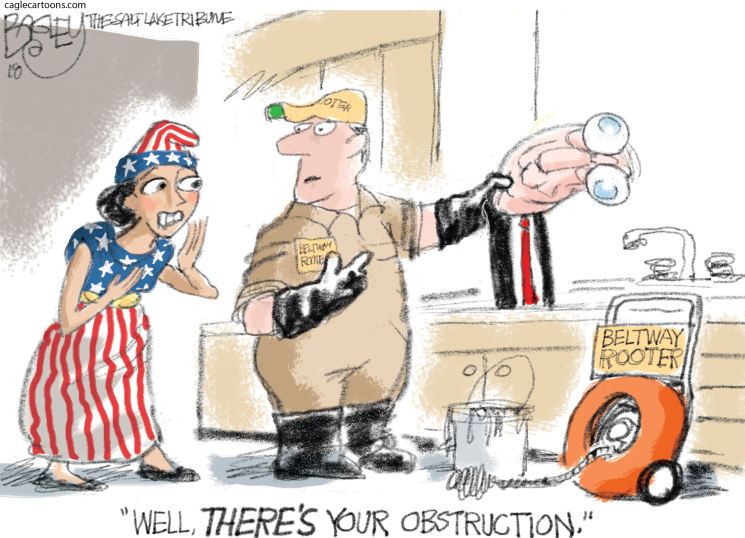 Curator of the Senate Mitch McConnell has decided to re-define his role in public life. McConnell is moving away from characterizing himself as a conservative legislative titan. According to an obsequious profile in The Weekly Standard (a Never-Trumper hotbed), McConnell has found his true calling.

The curator believes the best use of his talents is to serve as the Human Resources Department for the federal judiciary. In his new role as head of HR, McConnell contends that whatever happens to those losers in the House this November, the Senate must remain in his swampy hands.

The Emperor of Inertia has come to the belated realization that voters were listening when he promised them electing a Republican-controlled Senate, House and White House would mean a rebirth of conservative legislation.

The reality was different. Voters got premature ejaculations on election night and nothing has been conceived since.

"The stuff we did last year was clearly a Republican agenda," McConnell rationalizes. "... judges, taxes and regulations - that's what we live to do, and virtually all of those are forever done on a party-line basis."

Like Union Civil War Gen. George McClellan, in his mind McConnell is always outnumbered and facing overwhelming odds. Mitch is convinced LBJ couldn't have done a better job, but the voters aren't. That means McConnell's first task is political alchemy. He must turn stagnation into steak.

The cocktail conservatives at the Weekly Standard don't mind. They depict this weak, elderly placeholder as a victorious boxer with both gloves raised overhead. They would have you believe, "Republicans are better off than they look. The midterm election is six months away, and their chances of preserving a good-sized chunk of their power in Washington are good."

This is supposed to be good news? Up until this November Republicans had 100 percent of the power and did nothing. Losing half their legislative clout is supposed to raise our morale? Any perceptive conservative voter will ask the obvious question: What's in it for me?

The truth is, nothing, but McConnell gets to keep his big office if the GOP wins.

Hence McConnell's makeover. He doesn't want to move. The way to conceal his failure to repay the conservative base for its loyalty is by completely changing voter expectations. Now instead of being Mr. Legislator, McConnell is telling voters he's Mr. LinkedIn! The one-stop networking source for Republican lawyers looking for a soft landing in the judiciary.

"If we hold the Senate," McConnell explains, "we can continue to confirm nominations to lifetime appointments for a full four years and finish the job of transforming the American judiciary, which is my number-one goal." You might say it's one lifetime incumbent eager to recruit more lifetime federal employees, which he hopes won't 'grow in office' once they land on the bench.

Forget about resetting the dial on the family, immigration, religious freedom, federal spending or reducing the size of a bloated, wasteful federal government. Who has time for that when Mitch is conducting job interviews for circuit court?

Even if you're a conservative who buys into Senate-as-headhunter, there is this nagging question. Where do those judicial nominations that McConnell is so eager to ratify originate? Is there a ticker-tape deep in the bowels of the Supreme Court building that generates a candidate whenever an opening appears?

Or does Mitch man a booth at legal job fairs where he lassos likely candidates?

All that's immaterial to the Weekly Standard. They are in awe of the process, "In this ambitious effort, it takes two - a leader and a [Judiciary Committee] chairman - to tango."

Well, no. Truthfully this matchmaker isn't making any matches. Instead the nominations originate in a White House occupied by the dreaded President Donald Trump. I'm no cheerleader for Trump. His waffling on DACA, his short attention span and his embrace of the spend-a-palooza budget bill are infuriating.

Still, without Trump in the White House there wouldn't be any nominations to "transform the American judiciary." Hillary would be president and she'd be sending the names of leftist politicians who think they look good in black. But we are 800 words deep in a 994-word puff piece before Trump's name is even mentioned and then it's in connection with impeachment!

Mealy-mouthed, multi-chins like McConnell are the reason Trump won in the first place. Their continued failure to grasp that fact explains the trouble they face in November.

Can You Guess Santa’s Biggest Regrets?

by Danny Tyree
We all know Santa Claus as a "right jolly old elf," but the man carries a well-stocked bag of regrets. He recently sat down with me to list some of the ways he wished his life had gone differently. "I don't regret the Island of Misfit Toys real ...
Scott Atlas Has Quit, But Can’t Scrub the Blood Off His Hands

by Jase Graves
I've always taken great pride in the tender care I give to my cell phone. Until recently, I could boast that with all of the various cellular devices I've possessed through the years (dating back to the first Motorola bag phone my dad gave me du ...