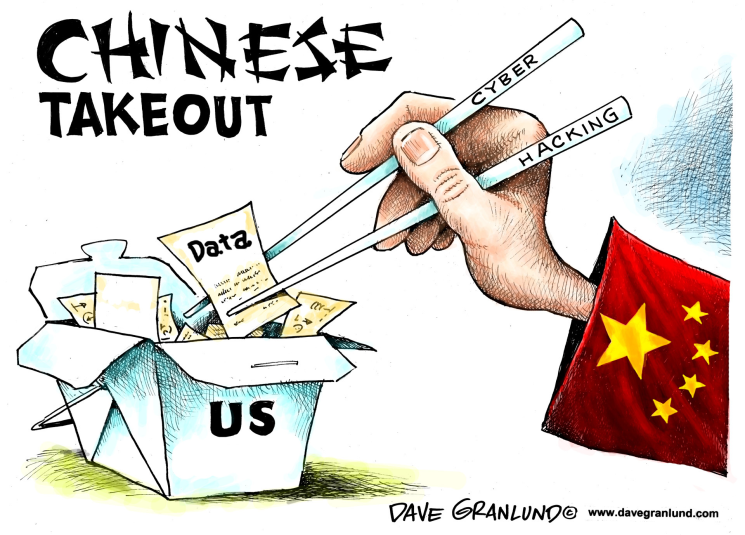 Recently, business reporter Harrison Jacobs accurately described China as a "techno-authoritarian" state. Where the Nazis used inaccurate Phrenology and calipers to identify enemies of the state, China uses the latest in technology to constantly identify, monitor, exhort and if need be, round up recalcitrant citizens.

The government's reach is so pervasive that the fleeting appearance of a Taiwan flag emoji is enough to crash an iPhone the first time it appears. (The second time a functionary of state security will crash the phone with a hammer.)

China's "Sharp Eyes" program will to install a nationwide surveillance camera network extending from public spaces to inside businesses and even private homes. The goal is for everyone to be on TV by 2020.

The accelerated development of facial recognition software makes the program feasible. The program's rollout doesn't leave much time for worries about early software bugs connected with real time surveillance of 1.4 billion people. Chinese state security is so efficient that even if the wrong man is identified, they'll make sure he's guilty of something.

According to Breitbart, by using surveillance cameras, informers and state security the government "closely monitors the behavior of all individuals... People considered loyal, law-abiding members of the Communist Party are assigned high social credit scores, while those who violate the law... are assigned lower scores."

By May of this year 11 million Chinese with low social credit scores had been prevented from boarding airplanes, and another four million couldn't get on a train. No reports as yet of low scorers being forbidden to buy shoes.

The social credit system originally documented Internet activity - where Chinese went on the web, what they posted and even what they bought. Now the system has grown to encompass a wide range of transgressions including "jaywalking, returning library books late [or] possessing frowned-upon religious or political materials, or [exhibiting] insufficient patriotism."

Regardless of how much this system would improve the quality of life in San Francisco and the NFL, it still sounds ominous to me. And now that China has announced a cicada infestation, the other shoe has dropped.

For those of you who don't keep current on bugs, cicadas are noisy critters who are chained to a calendar cycle, much like comets and women. Only the insect's cycle is once every 17 years. Cicadas make their way out of the ground in multitudes, produce an incredible amount of noise and then molt out of their current body into a completely new version, something like aging trophy wives.

My local Washington Post is so obsessed with these bugs that it almost has a cicada beat. As the time for Peak Cicada approaches one finds the paper filled with headlines like:

Are Cicada Infestations Harsher and More Frequent Due to Global Warming?

Trump and Cicadas: Is There a Russian Connection?

Even the Style and Food sections join in the excitement: 'Expert Suggestions for Removing Cicadas from Your Shoes'; and 'Cicada Crunch: A Protein-Packed, Summer Casserole With No Trans-fat'.

Some claim cicadas even taste like shrimp which, if true, will come in handy, because that's what the Chinese government wants citizens to do. The South China Morning Post reports the city of Hangzhou, located in eastern China, is under attack by cicadas and a city official is urging residents to save the trees by eating a bug.

"Sun Xiaoping, the official in charge of green spaces... [said] the best way to deal with the problem was for the local community to turn the tables on the creepy-crawlies and do some eating of their own."

Cicadas travel in swarms that can approach one million bugs per acre. That's enough insects to feed an extended Chinese family of 48 for almost a year or a North Korean family for a decade.

There's been no talk of consumption quota, but it's still early in the infestation. How cicada crunching will affect one's social credit score is unknown, too. Will eating just one be enough to preserve your social credit score or will you get bonus points for sharing recipes?

Vegans may also face a Hobson's Choice between obeying their dietary neuroses or maintaining a mass-transit level social credit score.

The fact cicadas as a whole are able to defeat predators by swarming in such large numbers may offer hope for fastidious Chinese. The trick is to enter a swarm, eat nothing, but emerge smacking their lips. Just don't forget to face a camera.