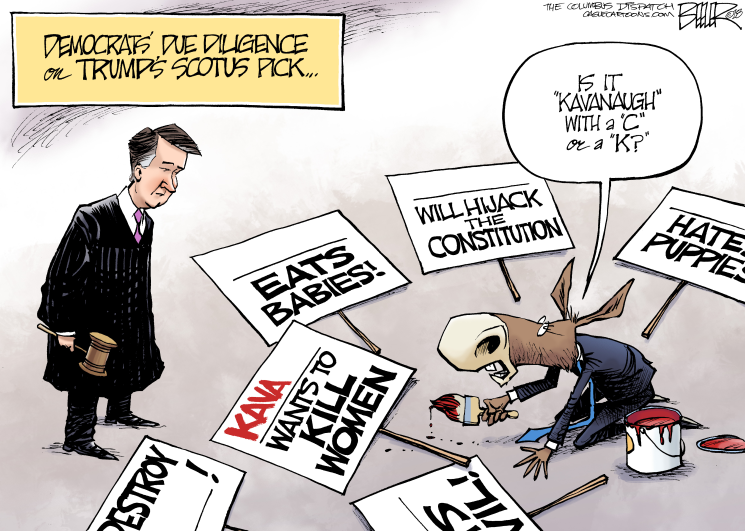 The Claremont Institute and the James Wilson Institute recently co,’hosted a panel discussing “The Kavanaugh Hearing: A Battle of Two Constitutions.” Don’t let the title confuse you. The Senate hearing for Brett Kavanaugh – President Trump’s latest Supreme Court nominee – won’t be like a customer service phone tree where you press #1 for the U.S. Constitution or #2 for the Mexican Constitution.

Currently, the U.S. Constitution is still the law of the land, in spite of the best efforts of globalists on the left. What the panel worthies were discussing was two different views of the Constitution and the role of a Supreme Court judge. Conservatives according to John Eastman, Director of the Center for Constitutional Jurisprudence, view the Constitution as a document “that means what it says and is interpreted faithfully” by the Supreme Court.

The left views the Constitution as a musty document written by white supremacists that is not to be taken literally. This is in stark contrast to the left’s views on the “white supremacist” in the Oval Office. Trump’s tweets, statements, random musings and jokes are always taken quite literally.

The left prefers a “living Constitution” shorn of white privilege and Christianity. This is a “Constitution that is flexible and conforms to the culture,” explains Eastman. Under the left the court operates more like Miss America judges who put more emphasis on the social station of contestants and how they will cure cancer.

Or as the late Sen. Ted Kennedy, the Liar of the Senate, said during the John Roberts’ confirmation hearing, “Whose side is Roberts on?” That is particularly important for the left because the Supreme Court has become their legislature of last resort. With enough justices on the left’s side, the Supreme Court can create the law.

Past victories include abortion, homosexual marriage, the federal stamp of approval for homosexual sex, the Kelo decision and the growth of the unelected administrative state.

Even with a Republican majority in both houses and a Republican president – the trifecta that Curator of the Senate Mitch McConnell assured conservatives would result in a tsunami of legislation, but instead only raised the humidity – Republicans are as anxious as Democrats are resigned.

Hadley Arkes, a Senior Fellow of the Claremont Institute, reminds us that after Robert Bork’s nomination was rejected by the Senate after a false and vitriolic display of character assassination, Republicans didn’t decide to fight back. Instead GOP nominees adopted a pose of “lasting defensiveness and timidity.”

While the left proudly announces its litmus test favoring abortion, campaign spending and guns that all their nominees must pass, Republicans act as though there is something shameful about protecting the unborn. One could say they’ve taken the spot in the closet recently vacated by homosexuals.

Even President Trump, who is no stranger to verbal controversy, assures one and all that he never asks his nominees their position on life. As a result, GOP Supreme Court nominees act like air travelers in the screening line. They shuffle along and avoid making eye contact. As Arkes puts it nominees are told, “don’t scare the horses and don’t scare [RINO senators] Lisa Murkowski and Susan Collins.”

Conservative senators are reduced to hoping the nominee judges like Clarence Thomas, but fearing he may turn out like John Roberts.

This primacy of the Supreme Court was never intended by the founders. Judges were to have limited role, according to Thomas Jipping, Deputy Director of the Center for Legal and Judicial Studies, , “interpreting and applying the law impartially.”

The fact judges do not is a symptom of the rot in Washington. Congress has abdicated its legislative and oversight role. There are few spectacles more pitiful than a Republican Congress suing Obama over unconstitutional elements of Obamacare when they have the legislative power to defund or amend the law. Rather than do the job to which they were elected, country club Republicans throw themselves on the mercy of the court.

Democrats are aggressive. Jipping explains their view is “judges have an unlimited role defined by the outcome of the case. The end justifies the means.” Citizens are presented with the sight of feeble Republicans deferring their authority to the courts, while leftists encourage the courts to make the laws they can’t convince the public to approve.

Judges who faithfully followed the injunction of Leviticus 19:15: “You shall do no injustice in court. You shall not be partial to the poor or defer to the great, but in righteousness shall you judge your neighbor” would return the court to its proper role under the design of the founders and go a long way toward re,’establishing the separation of power envisioned when the Constitution was written.

Until that happens, as Arkes’ says, the president is now reduced to being “the prime elector, choosing our nine black,’robed rulers.”