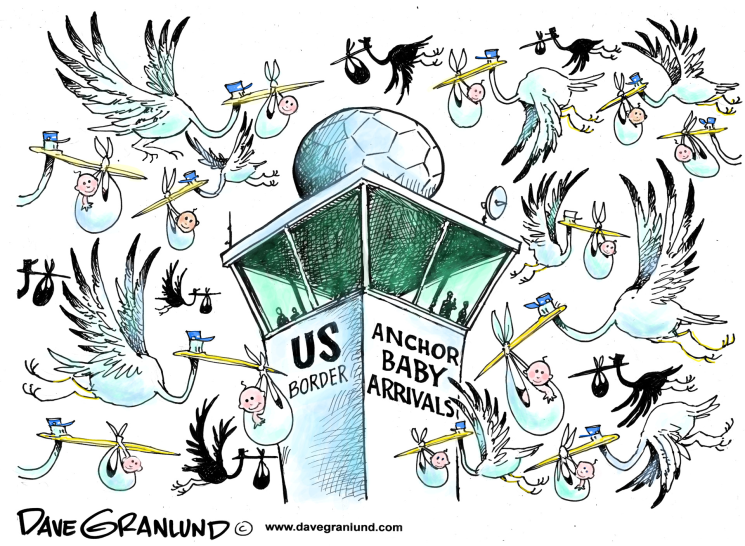 Michael Anton is amazed by housebroken conservatives that support an immigration position that will eventually remove any chance for conservative government. Anton is the author of “The Flight 93 Election” that outlined the stakes facing conservatives in stark terms, making him one of the first respectable conservative intellectuals to come out in support of Donald Trump.

Lately he’s been involved in an destructive fight with country club conservatives at The National Review over birthright citizenship. For those unfamiliar with the term, birthright citizenship treats becoming a citizen of the United States with the same gravity and respect afforded a participation trophy from your 8-year-old daughter’s ballerina ball league.

Birthright citizenship is more of a cartographic theory than a governing philosophy. Supporters contend that any immigrant who manages to cross the U.S. border illegally and give birth at taxpayer expense is not only producing a new nino, they have also just welcomed a U.S. citizen into the world.

Our border is a finish line in another area of prenatal care, too. If the illegal can worm her way across, she can demand an abortion so taxpayers are on the hook coming and going.

This anchor baby, instantly dropped into a foreign household, is also a lottery ticket that’s a guaranteed winner. ‘Experts’ never tire of assuring us that illegals cannot collect welfare, because it’s against the law. What the experts never add is a child can collect on every welfare program known to U.S. taxpayers, and the administrator of all this largess is the illegal parent.

Conservatives supporting birthright citizenship are the equivalent of Gen. Sam Houston sending a messenger to Col. William Travis informing him that after some consideration it appears the Texas Declaration of Independence gives Santa Anna property rights. Therefore, open the gates and let the Mexicans inside the Alamo.

Restoring sanity and accuracy to the discussion of birthright citizenship was the topic of a panel at the Heritage Foundation where Anton was joined by Dr. Edward J. Erler, senior fellow of the Claremont Institute and John Fonte, director of the Center for American Common Culture.

Erler points out the Supreme Court decision that began sprint for finish-line citizenship is just as incorrect as the Dred Scott or Plessy v. Ferguson decision. In United States v. Wong Kim Ark, two Chinese diplomats who were legally inside our borders and who, by treaty, could not become citizens, had a baby.

The court ruled that since the Declaration of Independence and Constitution were based on English common law, and common law specified children born within England were pledged to the Crown, then presto! Mrs. Wong now had her own Yankee Doodle Dandy.

To arrive at a decision that backwards, one would think the judge was a product of modern government schools.

Common law doesn’t mention citizenship. It discusses permanent, perpetual subjectship and allegiance to the king, based on the feudal system of master and serf. “There are no citizens under English common law,” Erler said.

The Declaration of Independence rejected English common law, saying our nation was built on a social compact between consenting citizens. A Supreme Court decision that completely misreads the Declaration and rules that rejection is really acceptance, is a decision ripe for being overturned.

The US and Canada – which can afford a handful of anchor babies, because it shares a southern border with the US and a northern border with planet’s freezer compartment – are the only two developed nations in the world that grant birthright citizenship. The United Kingdom ended the practice, as did India, New Zealand and Australia. When given a chance to vote on the issue, Ireland did, too.

What is absolutely infuriating is that birthright citizenship for illegals could end tomorrow. All President Trump has to do is issue an executive order. Or Congress could end it permanently by passing a law. The fact this has not been done is due to an unholy alliance between country club conservatives in thrall to cheap-labor businesses, the open-borders left and the administrative state.

Certainly the left would sue, but that’s a trap of their own making. If the case made it to the Supreme Court, there is a good chance Wong would be overturned and birthright citizenship ended. Trump needs to refill his executive order pen and start writing. It’s time to toss concept of anchor babies overboard, right after the mid-term election.