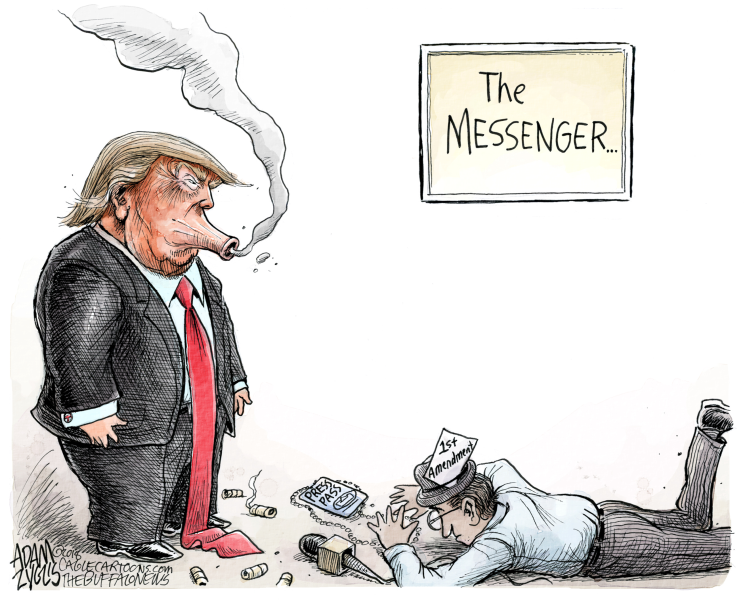 Evidently in the Trump administration, Kryptonite is spelled ‘injunction.’

President Trump, our Hitler-in-Waiting, proposes to exercise his superhuman powers by beginning a new program. Before the sweat-shops can begin producing the first black uniform the entire enterprise is brought to a screeching halt by some no-name district judge brandishing a piece of paper called an injunction.

This judge, specializing in improv law, guarantees himself a lucrative spot on the law school speaking tour circuit by ordering the president to stop whatever constitutionally authorized action he has taken that angers the left.

President Trump complains about this constantly. Their nuisance rulings are designed solely to delay implementation of policies the voters ratified in the last presidential election. The lawyers and the judges doing know the legal reasoning is fantastical, but it doesn’t matter. Fantastic or not, Trump is tied up in lawsuits.

That’s why it’s so frustrating when Trump is given the perfect case to strike back at these pettifogging leftist jurists. He could prove to the public how out-of-control the judiciary is. Instead, his administration craters.

The headline in the Daily Mail summed up his ignominious defeat: “White House backs down in CNN fight.”

I’m sure you know the story. CNN propagandist and egomaniac Jim Acosta had his press pass to the White House pulled after his latest egregious display of contempt and disrespect for the President of the United States.

Removing his press pass didn’t mean Acosta could no longer report on Trump. It just meant he couldn’t do it from inside the White House.

This proves Trump isn’t batting 1,000 on his judicial appointees. Kelly’s ruling is a case of hysterical, ludicrous overreach. He contends once the administration opened the White House to reporters a here-to-fore unknown geography clause was invoked and Acosta has property rights.

The judge then said the revocation was a violation of the 5th Amendment because no one could tell the judge “who made the decision.”

Instead of fighting, the White House gave up.

This bogus lawsuit is the perfect separation-of-powers test case. The judicial branch is ordering the executive branch to conduct its affairs according to the preferences of judiciary, a power it does not possess under the Constitution.

This petty judicial bureaucrat doesn’t have the authority to determine who’s admitted to the White House, just as he doesn’t have the authority to determine seating arrangements at state dinners or the guest list for the White House Christmas party. Admittance is a strictly internal affair at the sole discretion of the president. Banning Acosta for being a jerk does not limit his ability to continue slandering the president, it only limits his proximity.

If this property-right-by-admission exists in the White House, Judge Kelly should check the courthouse. I’ve been in courtrooms where the audience isn’t allowed to read, much less disrupt the proceedings. A reporter demonstrating disrespect for a judge would be escorted forcibly from the courtroom by a bailiff and possibly jailed for contempt of court.

If no press pass violates the 1st Amendment, then banning courtroom TV cameras is equally a violation.

As for the “due process” violation of the 5th Amendment, it’s not the judge’s business how the White House arrives at internal decisions. The Executive Branch is co-equal branch to the Judicial. It doesn’t answer to their internal procedural demands. The Trump administration agreeing to do so sets a dangerous precedent.

The correct response to this pathetic injunction would be a news conference where Trump played a video of Acosta’s greatest hits. Afterward the president would explain entrance to the White House is a privilege and that behavior is intolerable. Next, Trump would explain the Constitution’s separation of powers and how the Executive Branch is not at the beck and call of every ego in black robes.

The president has sole discretion as to who enters the White House and how the decision is arrived at is an internal matter not subject to judicial review. That’s why the press pass won’t be reissued.

The fact the Trump administration did not exploit this obvious example of judicial overreach indicates to me that the president listens to too many lawyers whose thinking is hidebound by bureaucracy and process.

It also indicates the Chinese aren’t as smart as we thought. Instead of fighting a trade war with Trump, they could have stopped his trade policy in its tracks had they only gone to court.