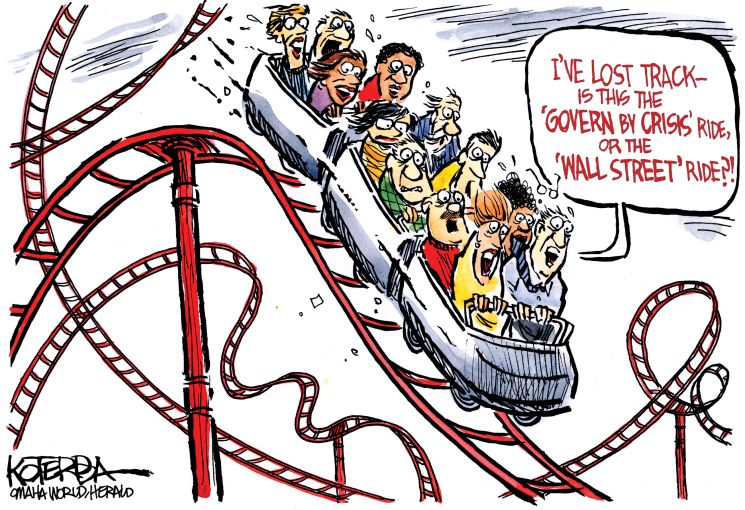 Here’s how the Opposition Media’s beloved “bipartisan cooperation” works among the residents of Incumbentstan here in Washington, DC. Republicans join leftists to proudly pass a “prison reform” bill that is of absolutely no importance to the conservative base that keeps Washington country club conservatives in offices.

But all passage of “prison reform” really proves is Curator of the Senate Mitch McConnell and retiring Boy Ryan are more than willing to quickly pass a bill that speeds the process of putting illegal immigrants in prison back out on the street. Unfortunately, they won’t spend a dime to prevent illegal immigrants currently out of the country from finding a way back in.

In fact, McConnell is having trouble keeping is utter disdain for the base that elects him in check. His latest disingenuous move is a continuing spending resolution that pushes wall funding into February when Nancy Pelosi will be running the House.

Building the wall, deporting illegals and citizen-first immigration reform were the issues that elected President Trump. That should have been the primary focus of his administration from the beginning.

Trump did face a unique situation. First, he didn’t expect to win, which is something he and Hillary had in common. He had to scramble to staff his administration. It was chaos. The only difference between the product of Trump’s HR department and Uber’s was Trumps staffers didn’t assault women. Oh, wait. Well at least not as many as Uber drivers.

He was closest advisors were Democrats, daughter Ivanka and son-in-law Jared. Neither of whom would have voted for any other Republican candidate running on Dad’s issues. Staff slots went to closet Never-Trumpers who opposed his immigration plans and careerists dragging their feet because they were afraid Trump’s policies would kill future job prospects with housebroken conservatives and big donors after they left the administration.

I also suspect Trump was naive. He probably assumed after he achieved an unprecedented upset what passes for Republican leadership would be eager to fall in line behind policies that obviously resonated with the electorate. The bumptious outsider and the wily insiders would pass important legislation while the opposition was stunned and before the investigations began.

Trump should have realized it was him against the world when prissy McConnell contemptuously dismissed Trump’s first budget with a wave of his dainty hand.

Trump should’ve started publicly making the case for his signature legislation then and there. It should have contained all funding for the wall; nationwide, retroactive EVerify for all jobs; criminal sanctions for employers who hire illegals and a tax on over-the-border remittances to fund a stepped-up program of deportations.

First step would’ve been passage in the House, followed by internment in the Senate. But Trump could’ve been patient. Then when the next spending bill came up he could inform McConnell that he won’t sign any budget bill unless his immigration reform is passed.

Curator McConnell’s dirty secret is it doesn’t really take 60 votes to pass legislation in the Senate. And he doesn’t need any Democrats either. All the Curator must do is return to the filibuster rules that were in effect until 1975. Then a simple majority is enough.

Yes, there would’ve been wailing and gnashing of teeth, but so what? It would have been worth the turmoil and potential loss of the House in the 2018 mid-terms to get that bill passed. Now we’ve lost the House and have nothing to show for it.

Instead Trump did nothing. He tweeted while the border burned. Last week he said he would embrace a Trump Shutdown if he didn’t get just the wall. Earlier this week he said he’d sign the spending bill without the wall. As this is written, Trump says he’s not going to sign the bill.

So, who knows? My bet is Trump will botch his last chance for a wall.

Illegal immigration matters to some of us. My wife’s best friend was killed by a drunk driving illegal. After we moved to Virginia another drunk driving illegal killed a friend we made here. My daughter has had two cars totaled by illegals. I was rear-ended by an anchor baby. (By the way, where is Trump’s executive order ending the anchor baby scam?) We certainly aren’t alone in this. We’re just ignored.

We read that when Ivanka gets teary-eyed, her father often responds forcefully. I’m hoping in the next few days one of the First Daughter’s friends will have a bad experience with an illegal. Maybe he’ll take that parking spot at the mall the friend was waiting for or he’ll prune the wrong tree. Something that really engages upper Manhattan emotions.

If only Ivanka chokes up again, maybe her father will stop choking on the wall.